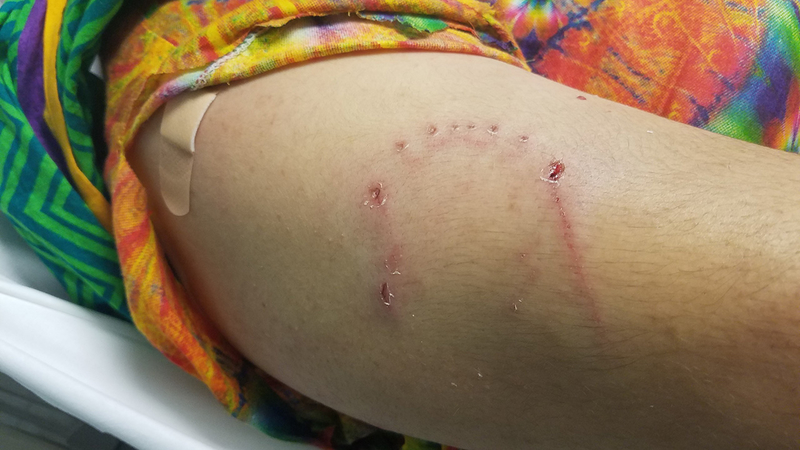 MORRIS PARK, Bronx (WABC) -- A mother and four girls were attacked by pit bulls in the Bronx Sunday night, leaving them with bite wounds and scratches.

It happened just before 10 p.m. at Pelham Parkway and Lurting Avenue in Morris Park, as Abida Kousar, her three daughters and a niece were headed home from a leisurely walk.

"I feel her teeth," Kousar said. "I tried to push down, but he would not leave me."

Authorities say two pit bulls got away from their handlers and attacked the group, with the victims ranging in age from 12 to 45.

"First it was the one dog that came at me, then suddenly two dogs were on me," daughter Mishal Nawaz said. "It was so horrible."

The mother was the most severely injured, as she tried to protect the girls during the attack.

"When they scratched me on my face, then I went to the owner," niece Aiman Fiaz said. "And then I told her, 'You just said they don't bite, and look what they did to me.'"

The dogs were taken into custody by the Emergency Services Unit and brought to Animal Care and Control.

The two owners were issued summonses, who -- according to the victims -- did little to stop the attack.

"I blame the ladies, because first they were like playing with them," daughter Tooba Nawaz said. "After that, they just left them alone. That's when the dogs came towards us."

It is unclear what will happen to the dogs, but the victims are simply relieved they are all OK.

"I am thankful that all of us were together," daughter Fatima Nawaz said. "We helped each other getting away from the dogs."