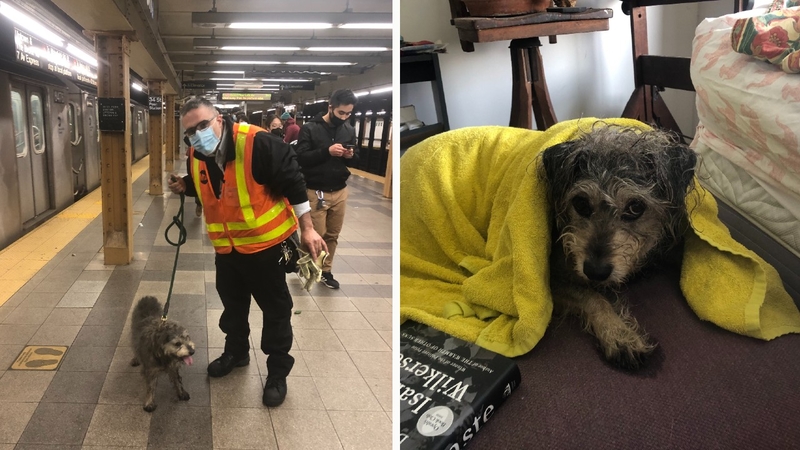 NEW YORK (WABC) -- A rescue dog that bolted out of a lower Manhattan apartment, crossed the West Side Highway and entered the subway system was found alive and safe 10 hours later.

Lucy, a rescue dog from Puerto Rico, has been with her family for about seven years.

Her owner, 76-year-old Susan Malone, recently broke her arm and leg and has been in the hospital the past week.

Susan's daughter, Molly Malone, and her friend were helping to take care of Lucy when she made the daring escape on Saturday around 11 a.m.

She got in an elevator, crossed the highway and ran into the Chambers Street subway stop.

Citizen App received reports of a dog roaming loose on the 1 train between the Chambers Street and Franklin Street stations before she got loose in the tunnel.

Lucy made it all the way up to the 14th Street subway station where she was spotted resting on the tracks under a 2 train.
Power was temporarily shut off while police searched for the dog but they could not find her. Trains on the 1, 2, 3 lines resumed but were moving at slower speeds.

By 9 p.m. Saturday, an MTA worker found Lucy at the 34th Street-Penn Station subway stop and he was able to safely rescue her.

"I mean it's quite an ordeal for for Lucy and Molly, and because we spoke a great length throughout the day and you know the story of her mother being in the hospital, and has been her mother's dog and and having to inform a mother that the dog was lost...it was heartwarming," MTA Train Service Supervisor Jose Bonilla said.

Molly Malone and her friend thanked the MTA and Citizen App for all their help in rescuing Lucy.

Lucy was in major need of a bath after her adventure and damaged a nail on her paw, but was otherwise OK.

Susan Malone will be reunited with Lucy on Monday.