PHILADELPHIA -- A fire that burned for more than a day following an explosion at a Philadelphia oil refinery has been extinguished, though officials are still monitoring local air quality.

In an update provided on Sunday, city officials said the fire at Philadelphia Energy Solutions was extinguished on Saturday afternoon and the gas valve that fueled the fire has been shut off.

The tank involved in the explosion has been isolated, officials said, and an investigation into the cause will begin on Monday.

Officials say there is no danger to the public and they continue to monitor the air for any potential hazards.

Concerned residents can call the PES Community Information Hotline at 215-339-7300 for updates and the status of the refining complex. PES also set up a number for residents to report damage from the incident: 800-899-1844.

The blaze at the Philadelphia Energy Solutions refining complex on Passyunk Avenue in South Philly broke out around 4 a.m. Friday at a tank containing a mixture of butane and propane. Five workers were treated for minor injuries, and nearby residents were asked to stay inside.

At the height of the response, the fire grew to three alarms. There were more than 120 firefighters on the ground with more than 50 pieces of equipment, and area neighbors were told to shelter in place.

"Oh my God! It's an atom bomb," said Vincent Carnuccio upon seeing the first of three explosions at the refinery.

Daryl Lee was on his paper delivery route when he saw it.

"All of a sudden - boom - the ground shook. The flame went up. Parts were falling out of the sky," Lee said. "Like the sun landed on the ground, that's how bright it was. Then as it fell back down, you saw what looked like metal coming down. Like glitter, sparkles, raining down. That's when I realized this thing blew up."

"After the first explosion sounded like a jet. But when a jet takes off, the sound fades. This stayed at a constant noise level," DeLuca said. "Then all of a sudden it got louder and that's when the second explosion happened."

"It was such a loud explosion. A lot of times I hear different things, but this was totally different. It was so loud," Hollingshed said.

Philadelphia Energy Solutions said there were three separate explosions in one of their alkylation units. Nearby residents said they could be felt through South Jersey and Delaware County, Pennsylvania.

RELATED: Looking back at 1975 Philly refinery fire that killed 8 firefighters

The Philadelphia Department of Public Health says air samples taken from the scene show no findings that would point to an immediate danger to the surrounding community.

Here is their full statement:

Regarding this morning's PES fire:

Air Management Services was on-scene immediately and took air samples. Preliminary testing at the refinery, and in the community around, found no ambient carbon monoxide, hydrocarbons (combustibles), or hydrogen sulfides.

Additional samples were taken and transported to the Air Management Services Lab. We are awaiting the results of the tests being run and will release the interpretation of the results as soon as it is available.

The Health Department has no findings that would point to any immediate danger in the surrounding community at this time, and the City is NOT recommending evacuation or shelter-in-place.

Though the Department of Public Health says that air quality near the refinery is safe, some neighbors were concerned about contaminants.

"We're breathing bad air. All we ask for is that they clean up the air, take this fossil fuel away," said Bennett.

A series of smaller explosions happened as the fire worked its way through the tangle of pipes carrying fuel across the complex.

The Office of Emergency Management sent messages through social media telling people in the area to shelter in place.

Refinery employees were working near the vat when it exploded but were not close enough to be severely injured.

The shelter-in-place order for residents in the neighborhood was lifted several hours later. There was no call for evacuations.

The Platt Bridge was closed for a time Friday morning so officials could bring in fire equipment. It was reopened just before 6 a.m. The Schuylkill Expressway eastbound was also closed for a time during the early hours.

PES said the refinery complex remains running, but at a reduced rate.

It was the second blaze at the refinery this month, following a June 10 fire in which no injuries were reported.

Other past issues at the refinery 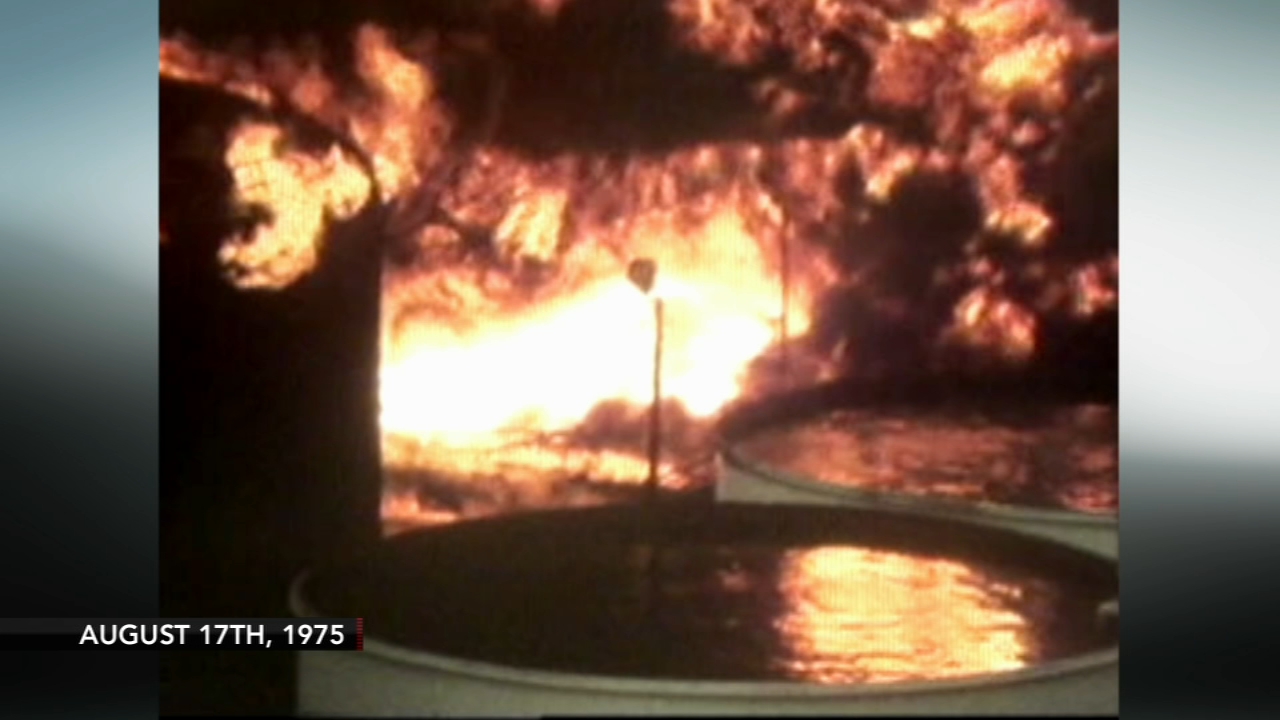 Looking back at 1975 Philly refinery fire that killed 8 firefighters