WABC
By Mallory Hoff
BED-STUY (WABC) -- Police are still searching for another suspect after a 20-year-old man was shot by police while attempting to rob a plainclothes detective in Bedford-Stuyvesant on Sunday, authorities say.

Police say three detectives were investigating a robbery. One was about to make an arrest, with the two others in a car with the victim.

According to NYPD Chief of Detectives, several individuals approached the detective on the street and tried to rob him of his cell phone.

As he pulled out the phone, the detective also pulled a gun and shot the suspect, Boyce said.

Another teen was also arrested at the scene on Monroe Street. Police say they are searching for a man who they say is between 16 and 18 years old.

The detective's bullets hit the man in the right arm and torso.

"I heard a gunshot, like 'boom' - 30 seconds after that, the captain was already here," said eyewitness Joaquin Vasquez.

Cell phone video caught the moments right after the gunshot, as the suspect screamed about his wounds.

Surveillance video from a nearby store shows him being rolled to an ambulance. The suspect is now in the hospital and is expected to survive.

Chief of Brooklyn Detectives Patrick Conry says that at 6:40 p.m., detectives were looking into a robbery that had been reported earlier in the day. One of the detectives was approached by three men who attempted to rob him at gunpoint.

Police found a gun on the sidewalk next to the detective who opened fire.

"It appears to be a semi-automatic but we don't know if it's a real gun or a fake gun, that will be looked at by our laboratory," said Conry.

It turned out to be nothing more than a BB gun. Police say the suspects have used the gun as part of a pattern of at least four robberies since September. 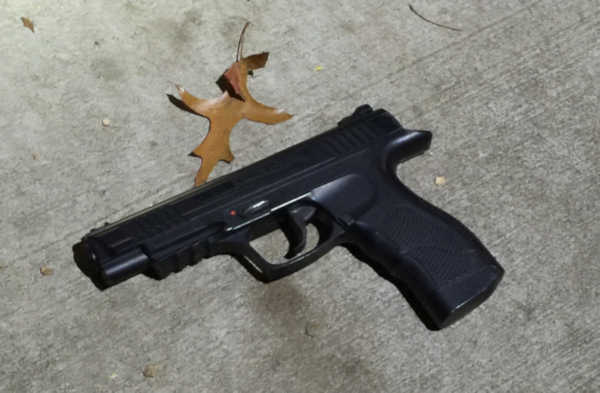 The detectives were in the heighborhood investigating an apartment scam involving Craigslist when they encountered the suspects.