Election 2020: At least 50 arrested after attempts to 'hijack peaceful protests' by setting fires in NYC 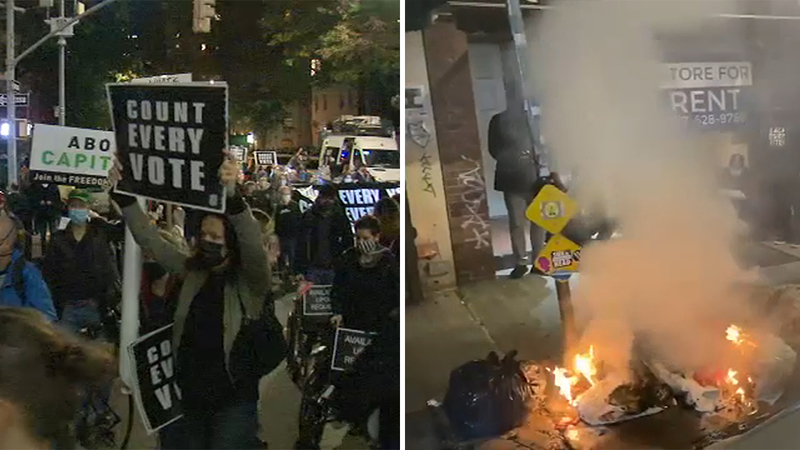 50 arrested during night of protests in New York City

NEW YORK (WABC) -- Despite no reports of unrest across NYC on Election Day, several arrests were made Wednesday night and into Thursday morning as individuals set fires and clashed with police.

A couple of hundred demonstrators took to the streets of Manhattan earlier on Wednesday to support "Count Every Vote." NewsCopter 7 was overhead as the people marched down 5th Avenue "in celebration of justice, fairness and democracy."

The group was marching toward Washington Square Park after President Trump's team announced they will file lawsuits in Michigan and Pennsylvania to stop vote counting underway.
EMBED More News Videos

NJ Burkett covers a demonstration in Manhattan to support "Count Every Vote."

The rally dispersed peacefully, but about an hour later, there were reports of unrest, garbage set on fire, and clashing with police near Leroy Street and 7th Ave in Greenwich Village.

We support everyone's right to self-expression, but setting fires puts others at risk and will not be tolerated. We are working to de-escalate the situation near Morton Street in the West Village to prevent further damage from occurring. pic.twitter.com/4nTK6UUBzC

At least 20 arrests were made Wednesday night as individuals set fires and clashed with police in NYC.

One woman, 24-year-old Devina Singh, allegedly spit in a police officer's face and was arrested at Seventh Avenue South and Leroy Street. A police chief was also struck by a protester but was not injured.

Singh is from Schwenksville, Pennsylvania, ironically Montgomery County, the center of the ballot dispute. She has prior arrests for resisting arrest and unlawful assembly and is a known protester in New York City.

The chief was arresting another person, William Beaudoin, in front of 16 Jones Street just before 10:30 p.m.

Menard allegedly punched the chief twice in the face. Beaudoin was attempting to stop police from arresting another person, who fled.

Menard was charged with assault, a felony, and obstruction of governmental administration.

Beaudoin was charged with resisting arrest, obstruction of governmental administration and harassment.

The chief was checked out at the scene.

The NYPD also confiscated weapons including M80 fireworks, a Taser that said "police" on it, as well as knives.

These weapons, confiscated at protests tonight, put others at risk. Bringing weapons to peaceful protests cannot and will not be tolerated. We are currently working to de-escalate the situation. Anyone caught with a weapon will be arrested. pic.twitter.com/GiCDv74ncT

"We certainly have seen some of that earlier in the year. Last night,we saw relatively few people out. Certainly nowhere near what was projected that was raising concern. I think we can safely say the vast vast majority of people simply want to see the election results counted fairly, they want to know the result as soon as possible and then we are in a position to move forward," he said. "I do not see a particular problem like you described. Clearly, what most overwhelming number of New Yorkers want is just a peaceful approach to this election dynamic, and the ability to move forward and move on."

RELATED | NYC businesses board up amid fears of civil unrest

"One thing that every American should agree on is that when you cast a ballot, when you vote in this country, it should count. It should be heard. We should all be able to agree on that, Democrat or Republican. And when you win, you win. And when you lose, you lose. You have to go back to the battle of ideas and try to win more votes next time," a protester said.

As uncertainty around the election result continues, police anticipate so might the protests.

Hundreds of businesses in cities across the U.S. boarded up their doors and windows ahead of the election, fearing the vote could lead to the sort of violence that broke out after George Floyd's death.

The NYPD had said they were plotting new ways to deal with demonstrators and protesters to avoid violence.

John Miller is Deputy Commissioner for Intelligence at the NYPD. And in all the chaos, he says his team has actually discovered order. He says tactical resistance that originated during protests in Hong Kong is now a fact of life in New York.

"Something we've never seen before which is almost a hundred percent resisting arrest, and what we've seen on top of that is a tactic called de-arresting," Miller said. "So not only is the person not compliant in being arrested, but a group of people come in to try to pull them away."

Miller said the tactic of de-arresting has coursed through social networks, complete with online training manuals, instructing demonstrators to surround someone cops are trying to arrest and then help him escape -- leaving the cops to fight with people they weren't even trying to arrest.

The tactic surprised cops this summer as they tried to make an arrest on the Brooklyn Bridge.

"What this resulted in is a lot of imagery being put on social media that appears to portray excessive police violence," Miller said. "And it's hard to tell people you're not seeing what you're seeing, but when you have that context, you don't know why that's happening. And they've used that very effectively as propaganda."

Hear more from Miller in the video below:
EMBED More News Videos

Josh Einiger has more with the NYPD on their effort to de-escalate violence during protests.

The NYPD also announced it had formed a Looting Task Force which is prepared to investigate any acts of looting.

The NYPD’s newly formed Looting Task Force is prepared to investigate any acts of looting that can potentially occur. pic.twitter.com/U13Wte8zCQ

RELATED | Who will win the 2020 election? Here are Joe Biden and Donald Trump's paths to victory
EMBED More News Videos

Paths to victory: How President Donald Trump or Democrat Joe Biden could win the presidential election as of Wednesday morning.