Coronavirus Update for New York
WABC
NEW YORK (WABC) -- New York Governor Andrew Cuomo insisted Monday that the state did, in fact, accurately report nursing homes deaths related to COVID-19, though he conceded that the state did not answer some requests for information quickly enough.

The governor's comments came days after a top aide revealed that the state held back information from the legislature while it sorted out a similar request from the Department of Justice.

Cuomo has been under increasing criticism over his handling of the nursing home deaths during the initial height of the pandemic, and the governor fired back, calling Republican actions "raw politics" for demanding his resignation and additional investigations.

Almost 13,000 nursing home residents have died during the COVID crisis, a number that is about 50% higher than Cuomo's office initially reported.

Amid criticism it accelerated outbreaks, Cuomo reversed a decision early in the pandemic to release recovering coronavirus patients from hospitals into nursing homes. That initial guidance to admit COVID-19 patients into nursing homes "may have put residents at increased risk of harm in some facilities," New York Attorney General Tish James said in a report last month.

Jim Dolan has the latest COVID headlines for New York.

The AG's office found that a larger number of nursing home residents died from COVID-19 than the New York State Department of Health's published nursing home data reflected, and Republicans have been calling it a scandal that the Justice Department must investigate.

Republicans, however, were not letting up.

"Just look at Governor Cuomo's failed record," Rep. Elise Stefanik (R-NY) said on Fox News. "He is the worst governor in America in terms of how he has handled the COVID crisis, and last week was an absolute bombshell. You have both Democrats and Republicans calling for an indepedent investigation."

"Governor Cuomo's failure to apologize this afternoon was a shocking slap in the face to the New Yorkers who have lost loved ones to COVID-19," he wrote. "His inability to take blame for the hurt inflicted on our families by his administration's relentless disinformation campaign is wrong on every level. The governor seems incapable of comprehending that it was his Administration at fault, and nobody else. He continues to shift the blame anywhere but upon himself and his top officials. The governor's major excuse for the failure of his Administration to provide accurate, timely information to the public was, 'We were busy.' This is a pathetic response coming from a man who had the time to publish and promote a book about his pandemic response while New Yorkers clamored for the truth."

"I was explaining that when we received the DOJ inquiry, we needed to temporarily set aside the Legislature's request to deal with the federal request first," she said. "We informed the houses of this at the time. We were comprehensive and transparent in our responses to the DOJ and then had to immediately focus our resources on the second wave and vaccine rollout. As I said on a call with legislators, we could not fulfil their request as quickly as anyone would have liked. But we are committed to being better partners going forward as we share to same goal of keeping New Yorkers as healthy as possible during the pandemic."

Josh Einiger has more on a bombshell report that New York may have drastically underreported COVID-19 nursing home deaths.

New Jersey COVID-19 Vaccine Tracker
Find out if you are eligible and where you can go to get your vaccine
Do you have coronavirus symptoms?
Where to get tested in New York, New Jersey and Connecticut
WATCH: Eyewitness to a Pandemic
Centers for Disease Control and Prevention on coronavirus


Submit a News Tip or Question 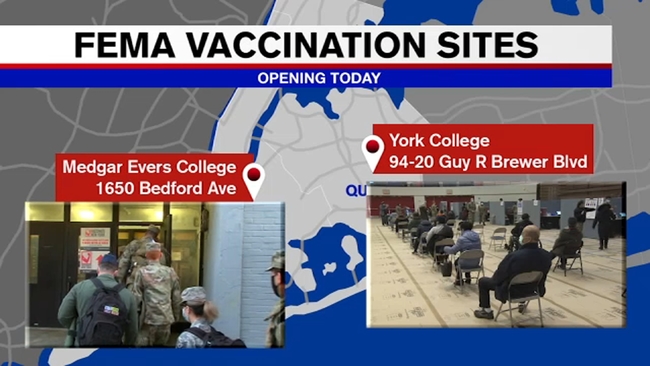