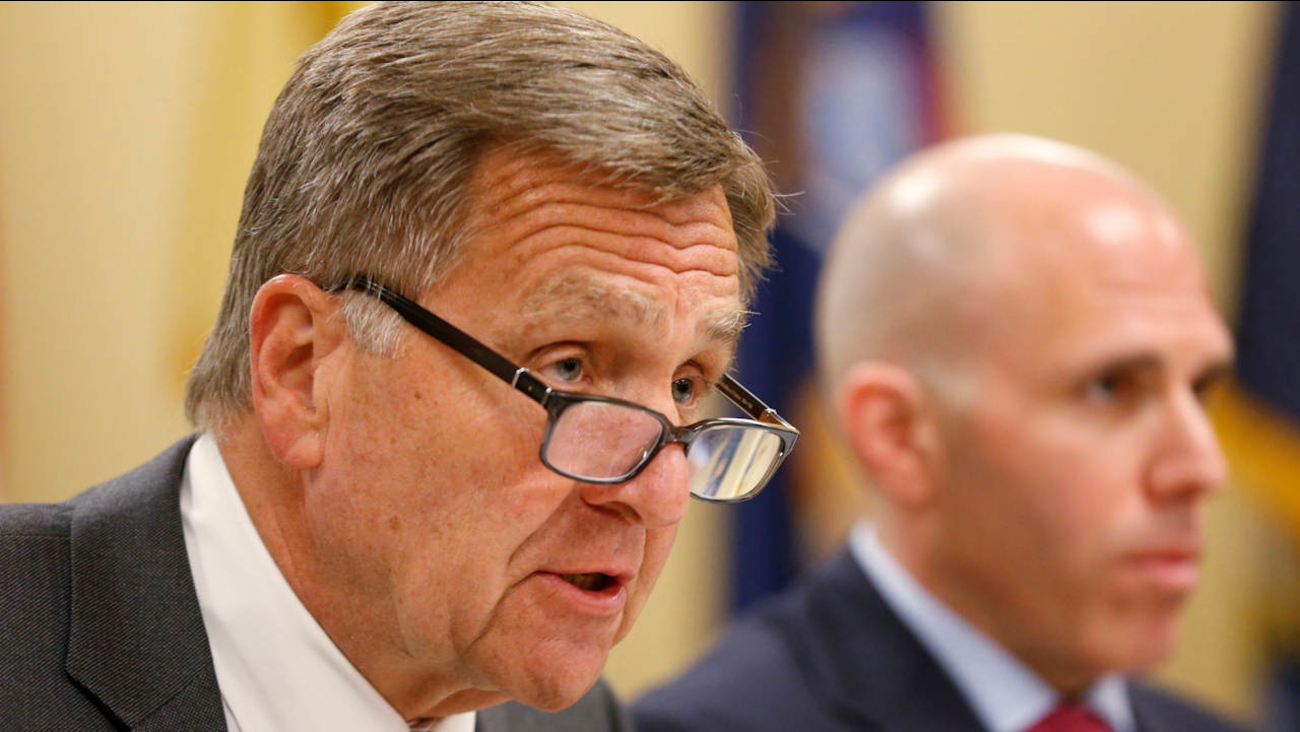 David Samson, then chairman of The Port Authority, attends the board of commissioners monthly meeting in Jersey City on March 19, 2014 (AP Photo/Julio Cortez)

NEW YORK -- The former head of one of the nation's most powerful transportation agencies and a longtime mentor to Gov. Chris Christie was sentenced Monday to four years of probation after admitting he pressured United Airlines to reinstate a flight route to give him easier access to his weekend home.

David Samson, former chairman of the Port Authority of New York and New Jersey, pleaded guilty to bribery last year for the backroom deal, which occurred at a time when United was negotiating with the Port Authority over a new hangar it wanted to build at Newark Liberty International Airport.

Before the judge pronounced his sentence, Samson apologized to the court, his family and friends, "and to the public, to whom I owe much better."

"I take full and complete responsibility for my actions," he added.

The judge also sentenced Samson to home confinement for one year and 3,600 hours of community service. Samson must also wear a monitoring device and pay a $100,000 fine.

Samson had faced up to two years in prison.

According to court filings, Samson wound up saving roughly an hour's driving time by flying into Columbia, South Carolina, to his home in Aiken instead of from Charlotte, North Carolina. United discontinued the flight shortly after Samson resigned in early 2014.

Samson began to lobby for the flight almost as soon as he became chairman, Assistant U.S. Attorney Vikas Khanna told the judge before sentencing.

"He wasn't lobbying United for something New Jersey residents were clamoring for or something the Port Authority needed," Khanna said. "He asked one of the world's largest airlines to create a flight route just for him."

The Port Authority oversees billions of dollars in assets and revenues and operates the New York area's major airports as well as bridges, tunnels, ports and the World Trade Center. Revelations about what was jokingly dubbed "the Chairman's Flight" came on the heels of the 2013 George Washington Bridge lane-closing scandal, which culminated in the criminal convictions of two former Port Authority officials in a political retaliation plot.

Samson, 77, wasn't charged in that scandal, though the scheme's admitted mastermind testified Samson knew about the plot before it was put into action.

Samson's attorneys had sought a sentence of probation and community service, writing that Samson's actions were "an aberration in an otherwise unblemished and extraordinary career." They added that he is in poor health and is "very likely in the last few years of his life."

Prosecutors wrote in response last week that Samson "abused his power in a stunning and audacious manner" and should receive the full 24 months.

United Airlines was fined more than $2 million, and then-CEO Jeff Smisek and two other high-ranking United officials were forced out in September 2015 after the airline investigated the executives' dealings with Samson.

Smisek, Samson's attorney noted in arguing for leniency, wasn't prosecuted but instead received a $35 million severance package, according to Securities and Exchange Commission filings.

Jamie Fox, a longtime state official and the United lobbyist who was accused of conspiracy to commit bribery in the scheme, died last month at age 62. He had pleaded not guilty.