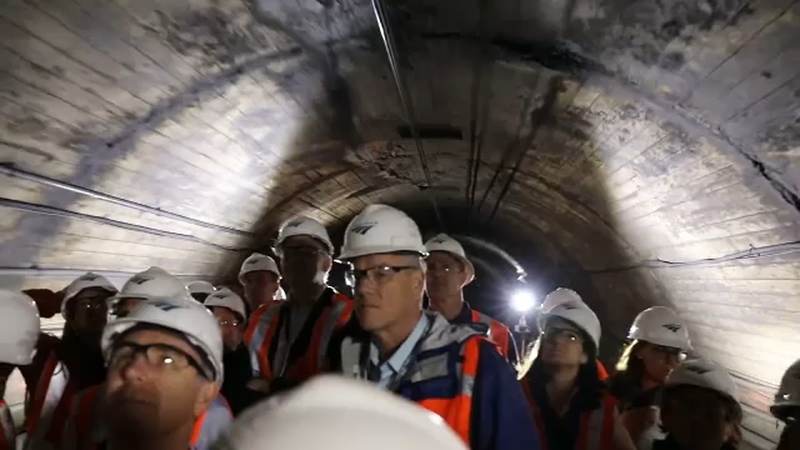 NEW YORK -- The chairman of a House transportation committee said Thursday he'll get a new rail tunnel built between New Jersey and New York even if it takes legislative maneuvering.

Oregon Democrat Peter DeFazio spoke at New York's Penn Station as he and several members of the House Committee on Transportation and Infrastructure prepared to tour the 109-year-old Hudson River tunnel and other rail infrastructure.

The $13 billion tunnel project is mired in a funding dispute with President Donald Trump's administration that has taken on a political tinge. It also has been awaiting final environmental approval for more than a year, longer than most projects wait.

DeFazio said Thursday the House could deem the project environmentally approved, allowing it to proceed, something he said Trump has done with offshore drilling projects, for example.

"Under Republican control, there have been numerous times they've waived environmental laws and just gone ahead with projects," he said. "We don't normally do that, but I find it hard to believe there's a negative environmental impact."

DeFazio's visit came on the same day Amtrak, which operates Penn Station and most of the track infrastructure up and down the corridor between Boston and Washington, D.C., announced summer schedule disruptions due to repairs to fix aging tracks and equipment.

It's the second time in three years that the replacement of equipment at the station will cause delays for some of the more than 200,000 commuters from New Jersey and Long Island. The station handles more than 500,000 people daily when the city's subway system is taken into account.

Two years ago, repairs on the station's west side near the Hudson River tunnel required the closing of several tracks and prompted a 20% reduction in rail service. Predictions of a "Summer of Hell" by Democratic New York Gov. Andrew Cuomo largely went unrealized, however, as disruptions were handled efficiently.

This year's work, centered on the station's east side that connects to rail yards in Queens, is less extensive, and no one is predicting the same level of disruption. Still, the Long Island Rail Road said it will have to cancel or divert seven trains each during the morning and afternoon commutes in July and August. The operator is adding trains before and after the peak periods in hopes of easing the crush.

Meanwhile, New Jersey Transit said 10 trains that normally originate or terminate in New York will switch to Hoboken, across the Hudson River, forcing commuters to take buses, ferries or other rail service to complete their journeys. That will add an estimated 20 to 30 minutes each way, NJ Transit officials said.

The Hudson River tunnel was damaged during Superstorm Sandy in 2012 and requires ongoing maintenance to restore crumbling concrete and protect an aging electrical system. Most of that work is done overnight and on weekends, but Amtrak has warned that the state of deterioration could force longer shutdowns for repairs. It has estimated that shutting down one of the tunnel's tubes during peak periods would reduce the number of trains from 24 per hour to six.

Thursday's visit came days after Trump and Democratic congressional leaders agreed in principle on a long-term plan to spend $2 trillion on rebuilding roads, bridges and rail infrastructure throughout the country.

There's no indication yet whether that plan would include money for a new Hudson tunnel, which, when completed, would allow the existing tunnel to be fully restored without service disruptions. Federal transportation officials have made the tunnel ineligible for key federal grant funding, saying New York and New Jersey are relying too heavily on federal loans for their share of the project.