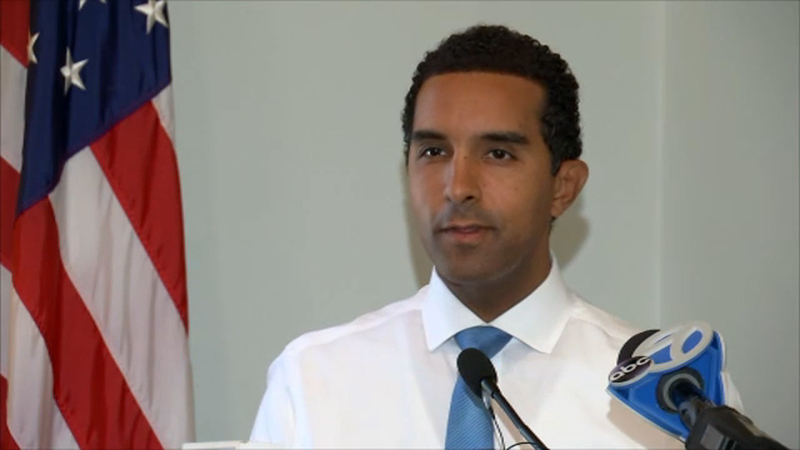 MOUNT VERNON, Westchester County (WABC) -- There was more political drama in Mount Vernon Tuesday, after the police commissioner sworn in Monday by the acting mayor was taken into custody for trespassing.

That's because Mayor Richard Thomas, who still believes he is the mayor after pleading guilty to corruption charges and agreeing to resign in September, won't recognize Shawn Harris in that role.

"It's been an embarrassment for me and my family and the great city of Mount Vernon and the citizens," Harris said.

The district attorney, however, declined to prosecute the case.

"The focus is to refocus and to get this right, and to make sure that we do the things that the people are expecting us to do," Wallace said. "Because right now, all of this is not looking good for the city of Mount Vernon. It is a bad look for us, and it can't continue this way. You know, it's embarrassing."

On Friday, a defiant Thomas declared, "I am the mayor of Mount Vernon," as the standoff at City Hall continues.

Thomas agreed earlier this week to resign effective September 30 after pleading guilty to stealing campaign funds, but in a move he says is illegal, the City Council passed a resolution Wednesday night to oust him immediately.

"The bottom line is, I am the mayor of Mount Vernon," Thomas said Friday. "And the distractions and the continued antics by the City Council is just that, irresponsible antics and distractions."

The council voted to strip him of his salary and proceeded to swear in Council President Andre Wallace -- Thomas' biggest political rival -- as acting mayor. But Thomas and his lawyer claim that vote was in contempt of court, and they have promised a legal challenge.

Thomas pleaded guilty last Monday to third-degree attempted grand larceny and second-degree offering a false instrument for filing after admitting to knowingly and unlawfully appropriated contributions totaling approximately $13,000 from his campaign committee, the Friends of Richard Thomas, during his 2015 mayoral candidacy, for his own personal use.
EMBED More News Videos

Marcus Solis has the latest on the political drama in Mount Vernon.

He avoided jail time as part of the deal, but he was sentenced to pay a $13,000 fine in addition to a one-year conditional discharge during which time he may not seek or accept any elected or appointed public office or seek or accept any position as a public servant.

The council claims the guilty plea violates the city charter, which they say allows for the immediate removal of a mayor, hence the action taken Wednesday night.

"The mayor removed himself when he pleaded to two misdemeanors in court," Wallace said. "So that is how the mayor, according to the charter had vacated his position. So at this time, the council doesn't have anything more to say, than the charter speaks for itself."

Thomas calls the move a coup, and his attorney says the City Council cannot remove him from office, cannot suspend his salary payments, and cannot appoint a new mayor.

He says Thomas will remain in office until the previously agreed-upon September 30.

The City Council voted Tuesday night to hire a private attorney to figure out how to get Thomas out of office as soon as possible.