Gov. Cuomo responds to reports of a 6th accuser 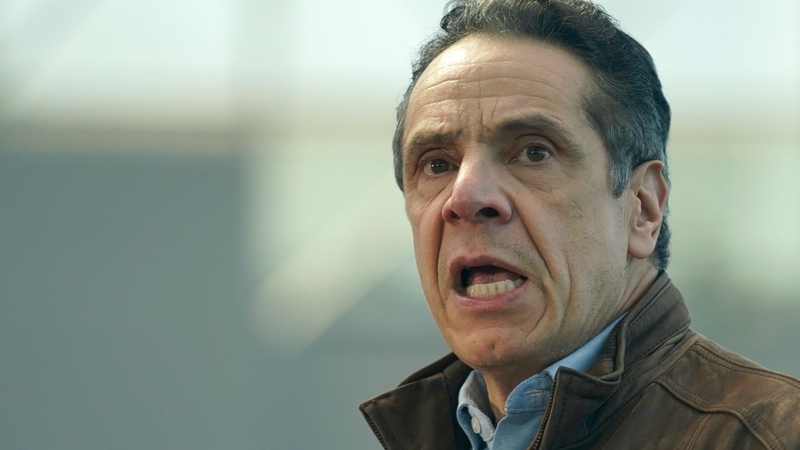 NEW YORK (WABC) -- Gov. Andrew Cuomo says he knows nothing about a new report of a sixth woman accusing him of inappropriate behavior.

On Tuesday, the governor was as defiant as ever. He said he knew nothing about the latest allegation from a sixth woman who came forward saying he touched her inappropriately at the Governor's Mansion last year.

Cuomo said that he was not aware of that claim and he never touched anyone inappropriately. He said no one told him at the time that he made them feel uncomfortable.

Governor Cuomo answers questions about the latest sexual harassment allegation against him.

A reporter asked Cuomo what he has told his daughters about the scandal surrounding hime.

"I told them what I told you-which is I never touched anyone inappropriately," Cuomo said. "I never made any inappropriate advances and no one ever told me that they felt at the time that I made them feel uncomfortable or awkward."

On Monday night in Rochester, one of the other five women making allegations against the governor said he made her feel like a loser and that she couldn't hack it working for him.

Ana Liss explained that she was speaking out after receiving a call from Cuomo's first accuser, Lindsey Boyland.
She was an aide of the governor, and described the environment at the governor's office as one that was particularly toxic for young female professionals.

She said he kissed her on the hand and cheeks before wrapping his arm around her waist.

"I believe my characterization of the administration and workplace environment helps support her story and supports Charlotte's story, and to encourage other women to share how they felt," Liss said.

She said her time in the governor's office drove her to counseling and drinking.

After the sixth allegation, Republicans were quick to respond and New York Senate Republican Leader Rob Ortt reiterated his call for Cuomo to resign:

"The latest allegation by a current employee of the Executive Chamber highlights a disturbing pattern of predatory pattern behavior by Governor Cuomo, not to mention a pattern of lies and broken public trust. Just last week, the Governor claimed he had never inappropriately touched anyone -- but yet the brave and courageous account of the sixth accuser says he did just that, only months ago. Yesterday's and today's press conferences by the Governor have demonstrated these allegations mean nothing to him. His threatening tone during these press events are clear signals to anyone that he does not want victims to come forward, and his circulation of a supportive "letter" that was drafted by his own Administration was just his latest public relations stunt to silence women.

Ortt said he's is confident that Joon Kim and Anne Clark, who were named by Attorney General Letitia James to lead the investigation into the sexual harassment allegations, will lead an independent investigation.

He went on to say that Cuomo is incapable of leading the state:

"This state needs a leader, and every day Andrew Cuomo remains in office is a day the people of this state are deprived of effective and honest government. All options are on the table, and as public servants we must put the interests of New Yorkers first. We all deserve better."

While some Republicans are pushing for impeachment, the Assembly is controlled by Democrats and impeachment seems unlikely. It hasn't happened in Albany for 100 years.
Meanwhile, Crown Publishing Group, which published Cuomo's book on leadership during the pandemic, says they are halting promotion of the book, not because of the sexual harassment scandal but because of the controversy over nursing home deaths.

The publisher says they will not reprint the governor's book. Cuomo began writing the book at the beginning of last summer while dozens of people were still dying every day from COVID.