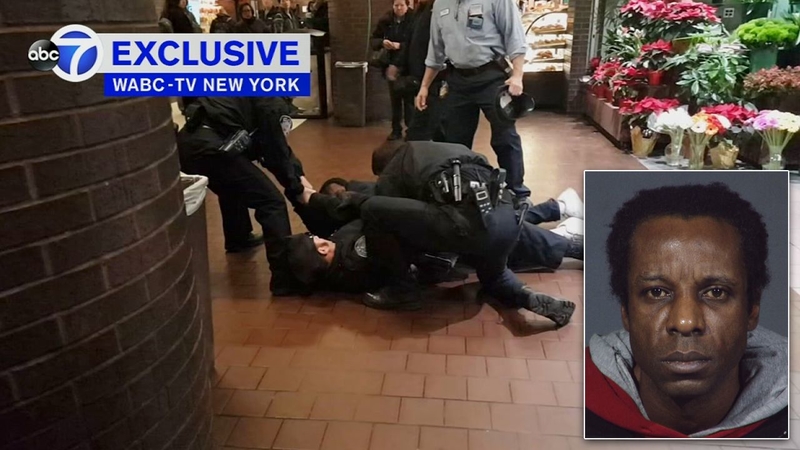 MIDTOWN, Manhattan (WABC) -- There were some chaotic moments at the Port Authority Bus Terminal Wednesday, when police officers became involved in a struggle with a homeless man who may have been trying to grab one of their weapons.

The incident was caught on camera in video obtained exclusively by Eyewitness News, and police say the incident highlights the dangers cops face every day, especially in a city where the homeless population continues to grow.

The video shows a swarm of police officers taking down the homeless man who became violent inside the terminal and even tried to take one of the officer's gun.
EMBED More News Videos

Authorities say the man grabbed at one of the officers, possibly at his belt, and a scuffle ensued

"They used the minimal amount of force necessary to affect a lawful arrest," Port Authority PBA president Paul Nunziato. "So it's a textbook situation."

Union officials said it is just one frightening example of what they face inside terminals, subways, trains and airports across our area, where the homeless and emotionally-disturbed often gather, especially during the winter.

"The public is getting more and more frightened of the homeless," Nunziato said. "And we really need to figure out how to get these people out of the transportation facilities, either into a shelter or into housing."

For example, also on Wednesday, Port Authority police officers stepped in at Newark Penn Station when two men started chasing each other. One of them was armed with, of all things, a long sword. Thankfully, the situation ended peacefully.

On December 22, 1980, Officer William Perry was shot and killed on the PATH train in Jersey City after simply requesting that the killer turn down his music. And two years before that, in 1978, Port Authority Officer Henry Koebel died at the Port Authority Bus Terminal after an emotionally-disturbed man took the officer's gun and fatally shot him.

Officials say all of this proves that officers never know when a situation may quickly escalate and why nothing can be taken for granted.