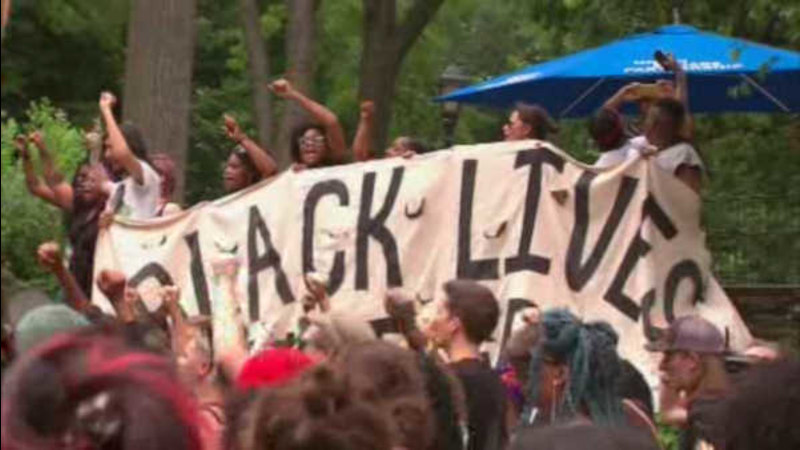 Between short speeches, they stood silently, holding signs saying "Black Lives Matter." Some had their fists in the air.

They left in a silent march, making their way south to Bryant Park and then to Herald Square.

At Bryant Park, young children who had been brought to the march were showcased as the lives demonstrators were marching to protect.

Jashaun Sadler of Ridgefield Park, New Jersey, brought his 6-year-old twins to the demonstration. He says it's "unspeakable" to think of them growing up in a world "where their skin color could make the difference between life and death."

Earlier Mayor Bill de Blasio called for peace and unity Sunday in the wake of the shootings.

The mayor appeared at Bethel Gospel Assembly Church in Harlem, and later at St. Patrick's Cathedral, where Cardinal Timothy Dolan called for peace across the nation.

"In this city we aspire to a different and better relationship between police and community, we believe it can happen," said de Blasio.

Over a dozen people taking part in a NYPD road rage protest were arrested Saturday night.

The protests began in Union Square, but spread uptown. Despite the disorderly conduct arrests, the protests remained mostly peaceful.