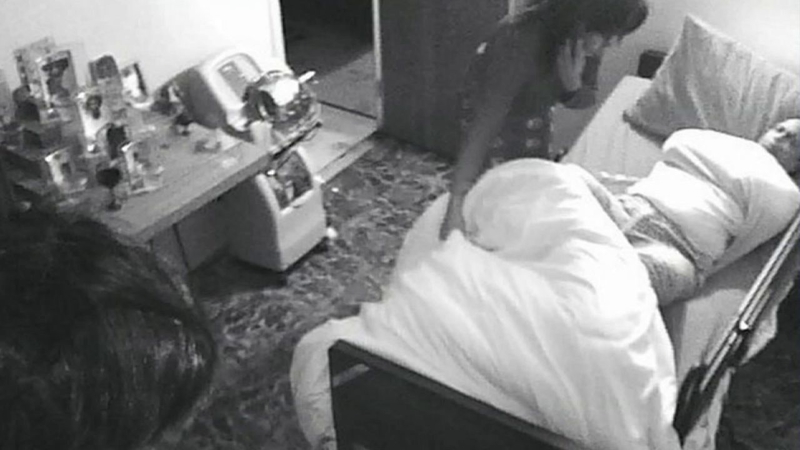 GARDEN CITY, Long Island (WABC) -- A woman in Queens who hired a health care aide to take care of her mother was shocked to find out that the hired help was literally tying her mother up like a mummy.

Hidden cameras revealed the sick scene, as the victim, who has dementia, was wrapped up in a sheet. Now, police are looking for the aide.

Chantar Riviere said she trusted the aide, but instead she was betrayed.

Images taken from a hidden camera Riviere says she set up inside her 69 year-old mother's Astoria apartment showed Yvonne Wilson wrapped up in bed sheets, apparently being used as a straight jacket.

Wilson, who is a pastor, is now terrified to be left home alone with anyone she doesn't know.

So Riviere set up the camera, and what she found left her both devastated and furious.

Riviere confronted the aide, who she says immediately fled.

The NYPD is investigating the incident, which occurred in February, but police have not been able to track down the suspect.

"We would like a thorough review of all the facts before coming to a judgement," an attorney for Continental Home Care, where the aide worked, said in a statement. "We take these allegations very seriously. We believe seeing the entire video will show what really happened."

The attorney added that Wilson had gone through 13 patients in a month because she was verbally abusive. But Riviere's attorney is not buying it.

"To try to blame it on a dementia victim is ridiculous," attorney Brett Leitner said. "You're professionals. You're supposed to be certified to provide this care."

Continental Home Care's attorney also says Wilson may have wrapped herself because she was cold, which Leitner also doubted.

"I don't think it's physically possible unless you're Houdini," he said.