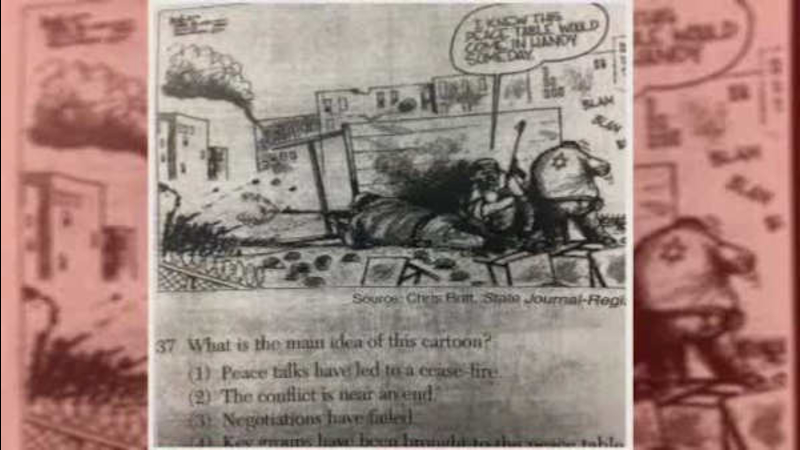 The test asks students what the image means, but some say the cartoon is anti-Israeli and should never have been part of the exam.

He is furious that students all over the state were faced with the multiple choice question that features three soldiers, one wearing a star of David and using a table as a shield. The caption reads "I knew this peace table would come in handy someday."

The Brooklyn lawmaker said a high school teacher was so upset about the cartoon she reached out to him. He calls it "bias, irresponsible and a mockery."

"To me, the issue is why the Board of Regents would include this kind of crap?" he said. "Why include for our students something that's pure anti-Israeli propaganda and nothing else?"

Students in 10th and sometimes 11th grades take the exam, which officials say is written by teachers, reviewed by the state education department and even field tested with students before the final exam is presented.

Many students at Brooklyn Tech were more concerned with picking the right answer and weren't offended at all.

"As students, we are objective learners," senior Angelina Benli said. "We're still going to see this content, so seeing it on an exam is not that big of a deal."

A state education spokesperson responded to a request by Eyewitness News.

"This question measures the students' ability to analyze a political cartoon, critically examine the cartoonist's point of view and apply that information to the questions being asked," the statement read.

Abagyan said she felt, if anything, that the image was anti-Palestine.

"The soldiers who are properly equipped and have on proper uniforms and weapons and are behind the table, they're the one's that are Israeli," she said. "But where are the Palestinians? Hiding in the buildings that are being shelled."
Related topics:
educationnew york cityeducationschool testingtests
Copyright © 2022 WABC-TV. All Rights Reserved.
TOP STORIES
TX school shooting leaves at least 19 children, 2 adults dead
Alleged shooter in unprovoked subway murder ordered held without bail
After shootings, Hochul looks at raising age for guns in NY
Former Capital Cities/ABC Chairman and CEO Tom Murphy dies at 96
NYC mayor, chancellor call on parents to take role in school safety
Beto O'Rourke confronts Texas gov. at Uvalde shooting press conference
Uvalde school shooting: What we know about 19 kids, 2 teachers killed
Show More
Texas school shooter bought 2 rifles within days of turning 18
'What are we doing?': Murphy plea highlights reaction to shooting
Surplus of summer rental homes, seasonal jobs along Jersey shore
7 On Your Side helps rescue deposits for NJ apartment fire victims
Nassau County beefing up water patrols for Memorial Day weekend
More TOP STORIES News