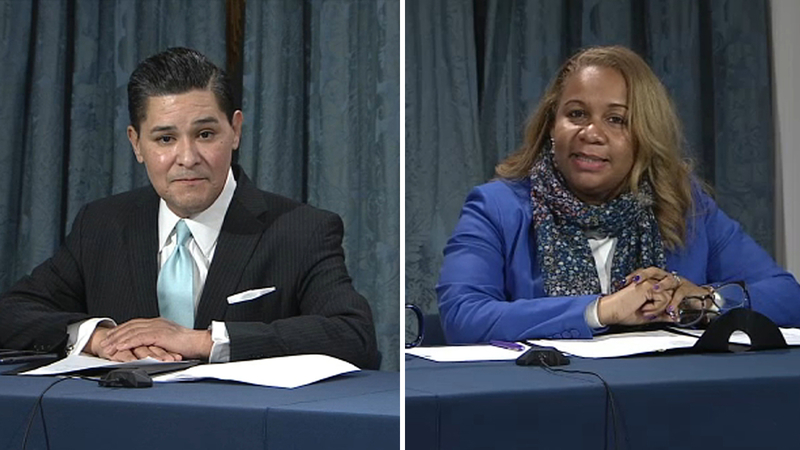 Carranza steps down, Porter to serve as NYC Schools Chancellor

He's been in charge of the city's public schools for nearly three years and led the nation's largest school district through the coronavirus pandemic.

"This is a very bittersweet moment for me," Carranza said. "I came here with the mission to lift up all of our public school children, not just some, all."

NYC Schools Chancellor Richard Carranza announces he is stepping down.

He said that he was stepping down to take the time to grieve the many COVID losses in his family.

New York City Schools Chancellor Richard Carranza announced that he would be stepping down.

"It has been the honor of a lifetime to serve as chancellor," Carranza added.

Mayor Bill de Blasio thanked Carranza for his service and promised that there would be "better days ahead."
EMBED More News Videos

Carranza actually drafted a resignation letter earlier this month but did not resign.

It is the second high-profile resignation that was apparently the culmination of a long-standing dispute with the mayor over the direction of the agency.

"Richard Carranza was a real partner in our efforts to open school safely. Too often he had to fight behind the scenes to keep the needs of students, staff and their families ahead of politics. We wish him well. He will be missed," UFT President Michael Mulgrew said in a statement.

The Department of Education announced Carranza will be replaced by Bronx Executive Superintendent Meisha Porter.

She is a New York City public school graduate, a 20-year veteran employee, who has led at every level in the system. Porter will be the first Black woman to serve in the role. She will begin as Chancellor on March 15, 2021.

"We have successfully partnered with Meisha Ross Porter on projects in the past, including the Bronx Plan and expanding community schools. We look forward to working with her in the future," Mulgrew said in a statement.

"To all the little girls out there, I'm saving a seat for you," Porter said while she gave a statement on Friday about accepting the position.