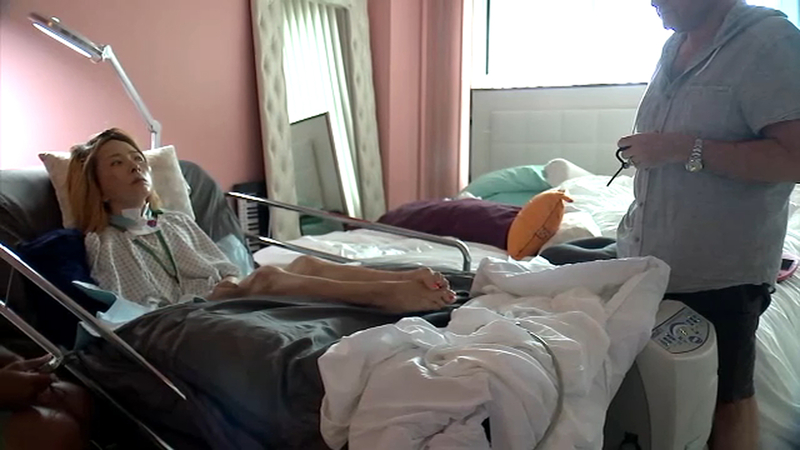 Patients say it gives them a right to die with dignity and to end their lives peacefully.

One couple in New Jersey has been contemplating the difficult decision.

Freddy Kalles found Katie Kim, the love of his life, in a grocery store. She was the pharmacist.

"I asked her out for coffee and I tried asking her out for four months and she kept saying, 'I don't date customers'", he said.

Freddy never stopped asking her out until she finally said yes.

"I'm doing my shopping and I hear an announcement, 'Freddy Kalles, come to the pharmacy', and she said, 'I changed my plans'", he said.

For the past few years, Freddy has had to come to terms with his wife's terminal illness. Multiple system atrophy is shutting down all of her muscles, internal and external.

And but for strong medications, she would be in constant, unbearable pain.

She says she doesn't want to live like this, and with the court allowing the law that lets patients administer life-ending drugs, she won't have to - her own wish.

"Katie's on fentanyl patches 24 hours a day and yet she still has pain," said Freddy.

The couple have been married 12 years. It was a life of trips across the world for fun. It became one visit after another after another to doctors.

Then medications, operations and medical equipment to simply keep Katie comfortable. She says she is at peace with her decision.

"I really believe that these people that are ill like Katie is, and are hurting like Katie, have a right to do what she's doing," said Kalles.

She says she doesn't want others to have to fight for their right to die. The couple is prepared to make the decisions with her doctor, and complete the required process.

Two doctors must sign off on the request for life-ending drugs under the law. And the terminally ill patient must be deemed an adult resident of New Jersey who can make such a decision and voluntarily expresses a wish to die.

The law mandates patients request the medication twice. At least one of the requests must be in writing and signed by two witnesses.

Under the law, patients must administer the drug to themselves. The patient's attending physician would be required to offer other treatment options, including palliative care.