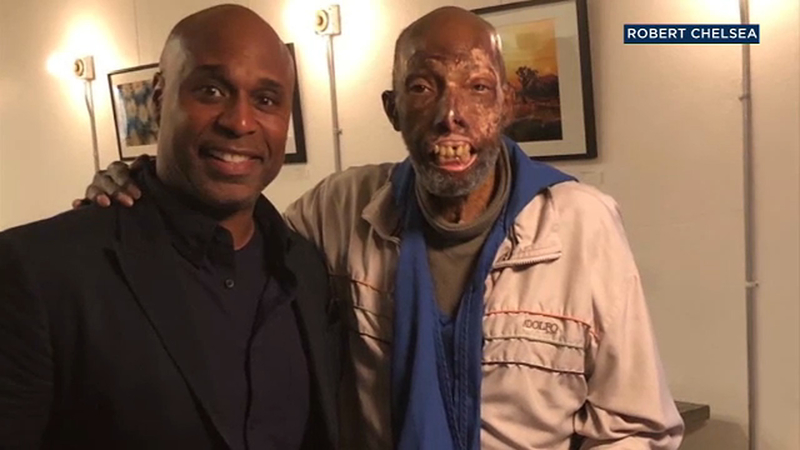 LOS ANGELES, California -- Robert Chelsea remembers his car flying into the air, coming down and blowing up -- with him inside it.

He's recalling the August 2013 accident that left him with third-degree burns over 50 percent of his body. A DUI driver slammed into Chelsea's disabled car that was stopped on the side of the 605 Freeway.

Chelsea was in a coma for six months and underwent 30 operations.

"This is cadaver skin," he said about his hands. "These are someone's else's fingernails."

But Chelsea isn't bothered by the disfigurement. He does, however, wish he wouldn't have to lay back to eat and drink, a complication from having had his lips burned off in the accident.

"There's a lot that looks like a mess, but it's mostly functional by God's grace," Chelsea said.

Chelsea will tell you he's at peace, that he feels close to God and no anger toward the man who changed his life. But now, Chelsea has the opportunity to become the first African-American in the country to have face transplant surgery.

At 67 years old, it would also make him the oldest person to undergo the procedure. It would also give him the ability to do the one thing he most regrets not being able to do now.

Chelsea is first in line for a donor now, but the surgery is expensive. His family set up a Gofundme page a few weeks ago, and while the donations are coming in steadily, they haven't reached their goal yet.

When the call comes, Chelsea has 24 hours to fly to Boston, where a doctor will perform the rare transplant surgery.

With all that he's been through, Chelsea's outlook is tremendously inspiring.

"Since the last five years, it's been a blessed experience for me," Chelsea said.