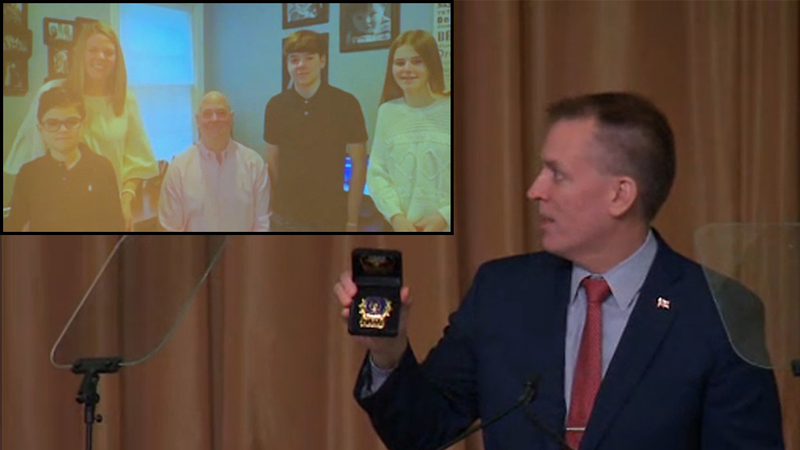 Officer Ross Dichter, weakened by surgeries and chemotherapy, is continuing to work from his Lynbrook home as a crime analyst for the NYPD's Office of Crime Strategies.

Shea said Dichter, a married father of three he described as a "crime analysis guru," is still able to crunch data and spot crime patterns as he works five hours a day from home.

During the Police Foundation's State of the NYPD breakfast, Shea asked Dichter, a self-described a numbers guy, if the numbers "7046" meant anything to him.

"I sat there and paused and started to sweat for a minute," he told Eyewitness News after the announcement. "I had to respond, 'I don't know what that number represent.'"

When he said no, Shea pulled out his new detective shield, with the number "7046."

Today, it’s my absolute honor to promote Police Officer Ross Dichter to the rank of Detective.

Ross, thank you for all your hard work and continued dedication to the people of this great city. https://t.co/YotwPRufGK pic.twitter.com/tseZrmvizJ

The room of dignitaries at the Pierre Hotel erupted in applause.

"My name is Detective Ross Dichter," he said. "Over the moon. Very excited, shocked."

Despite the surgeries, the chemo, and even as the disease continues to take a heavy toll on his body, it's a labor of love for Dichter.

"It's something I love," he said. "I wasn't going to let this sickness have me stop."

A lot of thought also went into Dichter's shield number, that each digit reflects the year his wife, Karen, and three kids, Michael, Emma and Benjamin, were born."

"It's all about my kids and wife," he said "That's what keep me fighting."