Why Americans should care about the Ukraine-Russia conflict

The risk of the conflict escalating beyond Ukraine is 'high,' one expert said.
ABCNews
By Meredith Deliso 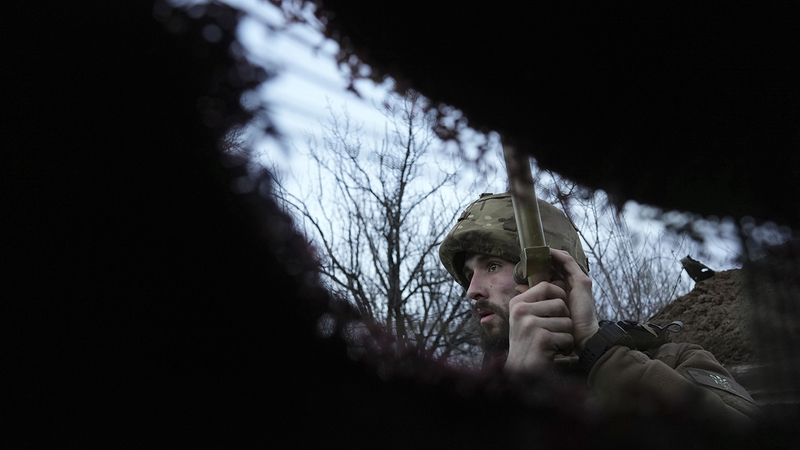 WASHINGTON -- After weeks of mounting tensions, United States officials have warned that a Russian attack on Ukraine could happen "any day now."

Russia has spent weeks building up military forces near eastern Ukraine, with more than 150,000 troops encircling Ukraine in Belarus and on the Russian side of the border, according to U.S. officials.

The Kremlin has denied warnings of an imminent invasion and claimed in recent days that it is withdrawing some troops, while U.S. and NATO officials have said -- and commercial satellite images have shown -- there have been no signs of de-escalation.

As global leaders continue to engage in diplomatic efforts to avoid war between Russia and Ukraine, a senior Department of State official told ABC News warned Thursday that this is "perhaps the most perilous moment for peace and security since the end of the Cold War."

As the conflict plays out on a global stage, Americans are somewhat mixed on how the U.S. should respond. In a new poll from Quinnipiac University, 57% of Americans said the U.S. should not send troops into Ukraine if Russia invades, and 54% support Biden's decision to deploy troops to support NATO allies.

Earlier this week, President Joe Biden addressed the American public and again made clear the U.S. will not send troops to support Ukraine. But he promised to defend "every inch" of NATO territory, already deploying several thousand more troops to Europe, and to support the Ukrainian people and their government with lethal defensive weapons, economic aid, and crippling U.S. and allied sanctions on Russia.

That high level of U.S. involvement is necessary, he said, because "this is about more than just Russia and Ukraine."

"It's about standing for what we believe in, for the future that we want for our world, for liberty, the right of countless countries to choose their own destiny. And the right of people to determine their own futures, or the principle that a country can't change its neighbor's borders by force," Biden said. "If we do not stand for freedom where it is at risk today, we'll surely pay a steeper price tomorrow."

President Joe Biden spoke to the nation Friday on the crisis with Russia over Ukraine.

To understand the United States' vested interest in the conflict, you'd have to go back to the Cold War, Craig Albert, an associate professor of political science and the director of Intelligence and Security Studies at Augusta University, told ABC News.
To counter Soviet aggression in Europe, the U.S. helped form the security alliance NATO, or the North Atlantic Treaty Organization, in 1949. In the years since, NATO has expanded several times, including adding three former Soviet republics.

Ukraine, a former Soviet republic that is bordered by Russia on the east, is not a NATO member, though in 2008 the alliance opened the door to membership. Russian President Vladimir Putin has demanded this not happen, as he seeks to limit NATO along Russia's border.

"Ukraine has attached itself to the West, to NATO," Albert said. "They still have military agreements, treaties, economic treaties, business treaties or relationships, even though there's no NATO treaty in place between Ukraine and NATO and the U.S."

The NATO members bordering Russia also present a concern. The potential impact of the Ukraine conflict on U.S. interests is considered "significant," by the Council on Foreign Relations, which said in part that the conflict "risks further deterioration of U.S.-Russia relations and greater escalation if Russia expands its presence in Ukraine or into NATO countries."

As Russia tries to "reassert itself into the great power game," the U.S. is seeking to maintain the balance of power in Europe and "protect Ukraine as a buffer against Russian-perceived aggression in Europe itself," Albert said, noting that Ukraine is "strategically important" for Russia, the U.S. and NATO.

What to know after President Biden says he's "convinced" that Russian President Vladimir Putin has decided to launch a further invasion of Ukraine.

NATO is "critical to U.S. policy in Europe," and supporting Ukraine for the past 30-plus years "has been integral to U.S. security policy for the European continent as a whole," Matthew Pauly, an associate professor of history at Michigan State University who is an expert on Russia, Ukraine and Eastern Europe, told ABC News.

"There's no doubt that the most eastern-facing NATO member states are quite rightly anxious about Russia's actions in Ukraine," Pauly said. "The United States obviously views it as its duty to oblige by the responsibilities of NATO membership to hold the line on the eastern front of NATO."

Indeed, the U.S. has already sent in troops amid the Russian aggression to support NATO's eastern flank.

"Make no mistake, the United States will defend every inch of NATO territory with the full force of American power," Biden said this week. "An attack against one NATO country is an attack against all of us."

The U.S. has sent thousands of additional troops to Central and Eastern Europe in recent weeks, though Biden has made it clear he won't be sending any to Ukraine to fight Russia and has stressed the importance of diplomacy toward achieving de-escalation.

In an interview with NBC News anchor Lester Holt earlier this week, Biden acknowledged the risk of further aggression. When asked what scenario could prompt him to send troops to aid Americans in Ukraine, Biden said, "There's not. That's a world war when Americans and Russia start shooting at one another."

"We're dealing with one of the largest armies in the world. It's a very different situation, and things could go crazy quickly," he said.

"It should be a concern to everybody," he said.

Another important dimension to U.S. involvement in the crisis has to do with its support of Ukraine as a democracy, Pauly said. Since 1991, when Ukraine declared its independence, the U.S. has offered "substantial" foreign aid, particularly in the 1990s, to help it emerge from the Soviet period, democratize and develop a free market economy, he said.

"Ukraine is a democracy, it's the only really functioning democracy of the few in the former Soviet space," Pauly said. "Although democratization has had sort of a challenging path in Ukraine, it's hard to argue that it is not a democracy."

"Democracy in Ukraine is worth protecting," he continued. "Democracy is our best guarantee against war and best assurance of peace."

The U.S., along with Western allies, has also voiced support for Ukraine maintaining its sovereignty and territorial integrity against Russian aggression.

Biden said the U.S. has been supplying Ukraine's military with arms, training and intelligence to help defend itself.

"Nations have a right to sovereignty and territorial integrity," the president said Tuesday. "They have the freedom to set their own course and choose with whom they will associate."

The exact impact of an invasion beyond the front lines remains unclear. Though Biden warned the American people that there would be "consequences at home" -- foremost an increase in energy prices as a result.

"I will not pretend this will be painless," Biden said Tuesday. "There could be impact on our energy prices, so we're taking active steps to alleviate the pressure on our own energy markets and offset rising prices."

Pres. Biden says a Russian invasion of Ukraine would “also have consequences here at home.”

“But the American people understand that defending democracy and liberty is never without cost.” https://t.co/D9IPWPkiUh pic.twitter.com/q8h2ISDDX7

In an incursion limited to eastern Ukraine, there could be a rise in the price of oil by $5 or $10 a barrel, according to Patrick De Haan of GasBuddy. Currently, a $1 per barrel rise equates to about a 1.5 cents per gallon rise in the national average price of gas. Should the U.S. and allies issue severe sanctions on Russia, it could retaliate by curbing oil exports, he said, impacting global markets.

If higher oil and gas prices cause the Federal Reserve to be more aggressive in its monetary tightening, that could also impact inflation, according to Mark Zandi, chief economist of Moody's Analytics.

Cyberwarfare also remains a concern. Last month, the Department of Homeland Security warned that the U.S. response to a possible Russian invasion could result in a cyberattack launched against the U.S. by the Russian government or its proxies.

There's also the impact on American troops, as more military forces are being deployed to support NATO countries.

"I think [Americans] should be paying attention to this because it could significantly affect strategic deployments of U.S. personnel," Albert said. "If nothing else, just people moving from where they are in their typical assignments right now, to move somewhere else, more strategically positioned against, perhaps, a Russian invasion."