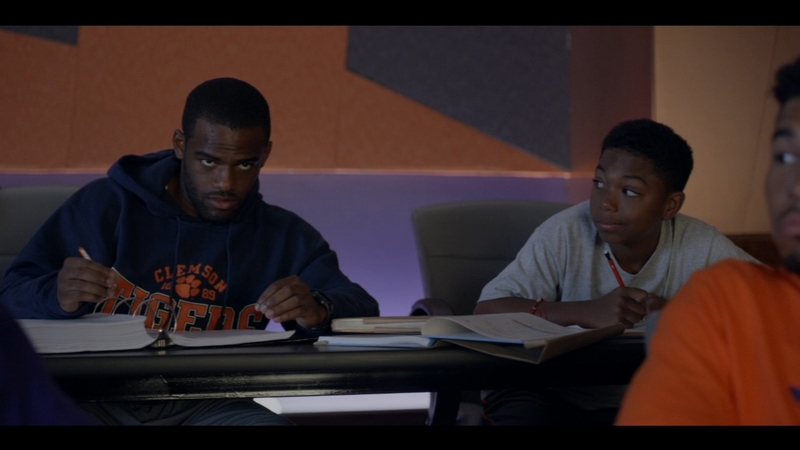 A new movie streaming now on Disney+ called "Safety" tells the true story of a college freshman who played football at Clemson University while taking care of his little brother back in 2006.

The title refers to the position he played but also references the security he provided for his younger sibling as their mother struggled with drug addiction.

"What does sacrifice mean to you? It means being selfless," those words spoken by a coach in the movie kick-off the trailer for "Safety."

Ray McElrathbey redefined the meaning of sacrifice and found-out just how selfless he could be after he had to bring his little brother to live with him on campus.
After his mother went to rehab, McElrathbey had to balance his responsibilities as a player, a student, and as a big brother.

"The lesson of the story I believe is family," Jay Reeves, who plays the lead role, said. "I feel like love and family and that whole feeling is what motivates Ray."

The real guy was on set throughout to keep the film real and help train the actors to play football believable on screen.

"He really helped build the family environment," co-star Hunter Sansone said. "And really brought another level of reality to what we were doing."

"Sometimes I can't even find words for it because I'm so elated, so humbled. it's wonderful," McElrathbey said.

Making it even better for all involved was the chance to shoot during half-time at an actual Clemson football game.

"No second takes. No do-overs," director Reginald Hudlin said. "And we got it all shot in seven and a half minutes."

Corinne Foxx, the daughter of actor Jamie Foxx, plays McElrathbey's love interest in the movie and says her father is a big football fan who was thrilled she got to make a sports movie.

"This is once in a lifetime, especially for the boys. When are they ever going to be on the field at a collegiate football game?" Foxx said.

Thaddeus J. Mixson who plays kid brother, Fahmarr McElrathbey, gets the last word on appearing before all those fans in the stands.

"It was just so fun, and just going down the hill like I say you just feel the energy," Mixson said.

That energy adds so much to the impact of this movie which is sure to bring tears to the eyes of many viewers.