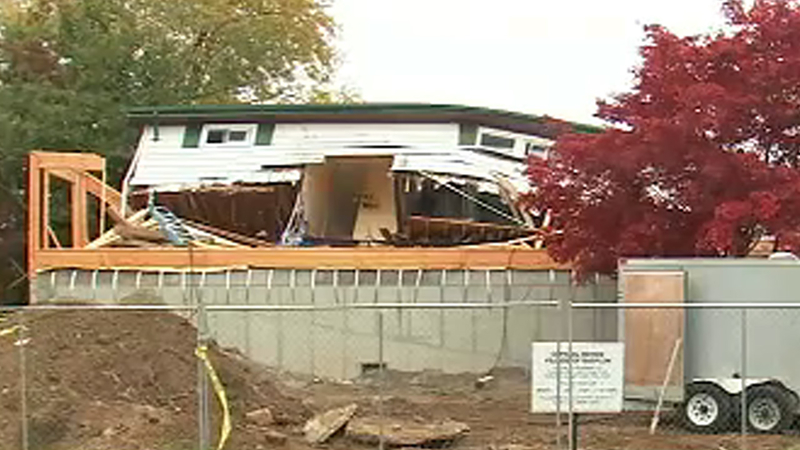 It happened on Coppertree Lane in Babylon around 9 a.m.

The house was damaged during Superstorm Sandy and was under repair, lifted on temporary risers. The collapse happened as workers were attempting to lower it from those lifts.

On the scene of a bad house collapse in Babylon. Coppertree Lane. Just like another we covered 2 years ago. These homes were still damaged from #superstormsandy, and now this. At noon. #sandydamage #suffolkcounty @ABC7NY pic.twitter.com/ZBnuSFuf4i

Neighbors say the residents moved out last May so the repairs could be made, and that this type of incident is particularly demoralizing so many years after the region was devastated by the storm.

Homeowners Mike Wisneski and his pregnant wife returned to survey the damage and see what's left of their home. They are religious, and for that reason, Wisneski said they can find strength to get through this.

"I don't know what happened, how it slipped off, that's kind of crazy," he said. "But things happen. But thank God, thank you Jesus, nobody was hurt. That's all that matters."

Six workers were inside the house at the time, and one of them suffered a fractured leg while he was on the second floor of the home.

"I looked outside my window, and sure enough, the workers were all running around everywhere," neighbor J.C. Beierle said. "There was one person up top, and I saw them running up and down the ladder trying to help the person that was up top. And I think he got hurt. I hope he's OK."

The injured worker was transported to Good Samaritan Hospital. The Contractor, PCCI out of West Islip, had no comment, nor did the lifting company, DRG out of Freeport.

But Wisneski says he felt they were reliable. His home, like so many others, was damaged during Sandy, and the foundation and second floor had been re-done.

"I think that's just horrible," neighbor Matthew Lauri said. "And I think people should be able to get their houses fixed right away so something this tragic doesn't happen."

The Wisneskis are just glad no one was more seriously injured. They have insurance, and they're renting a home in Amityville until repairs are complete.