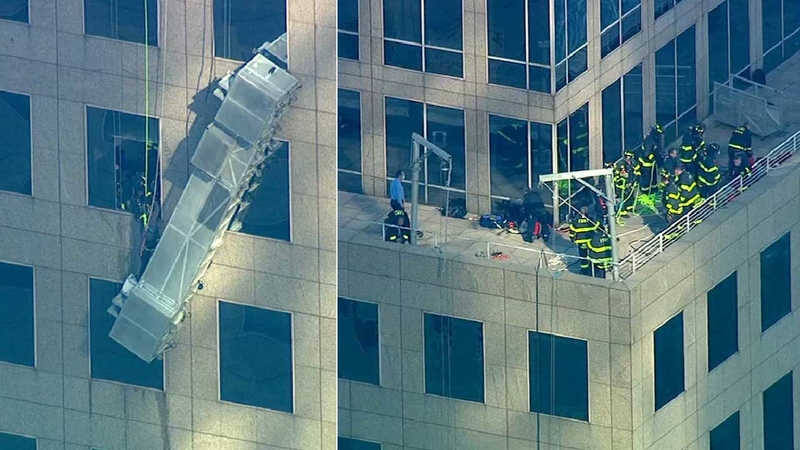 The FDNY said 911 calls came in around 9:10 a.m. of two workers hanging from a dangling scaffolding at 250 Vessey Street.

"First unit arrived on the scene found and a half minutes later to see what you see here, an off level with hanging workers attached to it," FDNY Deputy Chief Michael Ajello said. "We operated for approximately 40 minutes, we load safety lines to those two trapped workers, secured them, and we provided communication links with them. We cut the windows to remove them."

Video from Citizen App showed the scaffold angled down from the side of the building.
EMBED More News Videos

Video shared on the Citizen app showed 2 workers dangling from a scaffold after it collapsed in Lower Manhattan.

The two workers were wearing safety harnesses and were pulled into the 20th floor of the building around 10 a.m.

NewsCopter 7 was over Lower Manhattan as FDNY crews rescued two workers dangling from a collapsed scaffold.

"The first two companies did a phenomenal job getting rope on them to secure them, get them on the fire department rope," FDNY Lieutenant John Tobin said. "We checked rigging to scaffolding to make sure it wouldn't move any further."

There were no reports of injuries, and Ajello said both workers refused medical attention.

The cause of the incident is under investigation.