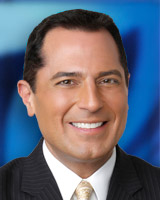 Shirleen Allicot has the story

TAMPA (WABC) -- A 10-year-old boy is being called a hero after stepping up when his school bus crashed into a lake. Witnesses say that once the bus hit the water, young Nicholas Sierra helped make sure all of his younger classmates got out safely.

"I saw him stepping on the brakes, but the brakes weren't working and then everyone started screaming," said Sierra after the crash outside Tampa Thursday afternoon.

The driver said he believes the brakes failed.

The bus took down a sign post and part of a tree before flipping on its side into the water.

"He said hold on tight and we figured out what he was trying to say as we were bumping like crazy, but it was too late," one of the students on the bus said. "We were going too fast."

Parents and first responders rushed to the scene, but all 27 students and the driver escaped through the rear emergency door. They all came out uninjured, thanks, in part, to Nicholas springing into action.

"I grabbed a kindergartener's arms and put her around my neck and brought her to land," he said. "And then I went back."

Witnesses are also calling the bus driver a hero. The 64-year-old man stayed on the bus until every child got out safely.

Investigators are now working to determine the exact cause of the crash.