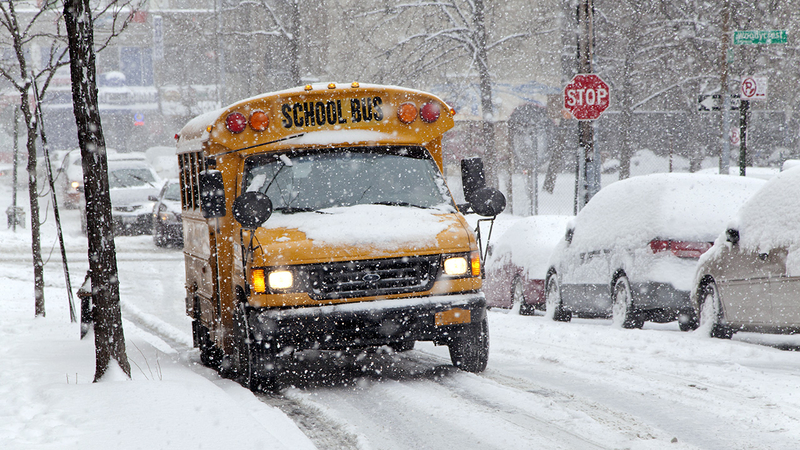 THE BRONX, New York City (WABC) -- Numerous school buses were stuck in traffic across the Bronx and New York City Thursday with children still on board., including one carrying children with special needs that was stuck into the wee hours.

All students were eventually reunited with their parents, thanks to NYPD and city officials working with the bus drivers.

One bus carrying preschool students with special needs from the Child Development Center in Harlem took eight hours to slowly snake through its rounds.

Five students were still on board at midnight, as the bus driver tried to get through gridlocked intersections.

One mother, Jennifer Reynoso, said she was driving by herself for hours, trying to find the bus.

She said they live 15 minutes from the Harlem school, and the bus -- run by Phillips Bus Company -- usually leaves the school at 2 p.m. and takes a route north to Kingsbridge before making its way back to Reynoso's home in Melrose.

When the driver was really late, Reynoso decided to get her son herself. And she did, six hours later, when she finally caught up with the bus and was reunited with her son.

The remaining students left on the bus all eventually returned home, thanks to City Councilman Ben Kallos -- who helped a mother track down the bus by calling the bus driver's cellphone -- and NYPD officers who eventually escorted the bus as it finished its rounds in the early morning hours.

Kallos' office has been pushing for legislation that will put GPS trackers on the buses, and on Friday, city officials said they'll be placing tracking systems on all of their buses.

In this case, the bus driver made calls on his personal cell phone until he was able to get free.

NYPD Chief of Department Terence Monahan detailed the difficulties police had with getting the buses around to make the rounds during a news conference.

"We had some incidents in the Bronx of school buses stuck with kids for hours," he said. "At 11 (p.m.), 12 a.m., we started getting direct contact with the buses. We got cops out to them and freed them."

Officials said Friday that the last students were finally home -- and safe, they stressed -- by 3 a.m.