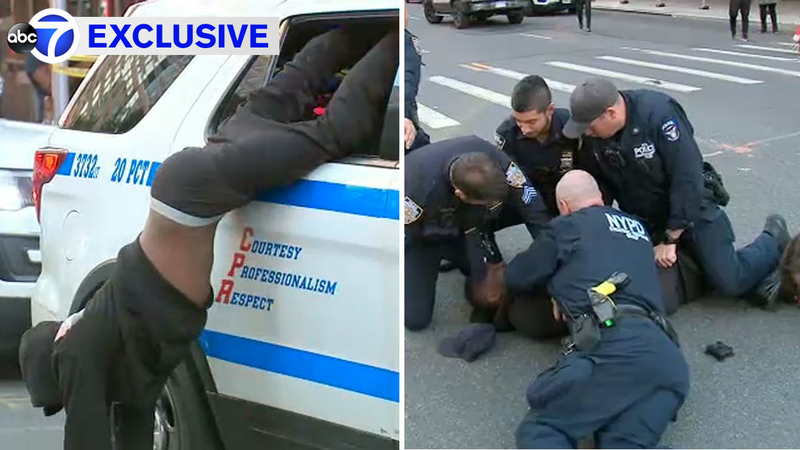 Man escapes back of NYPD car before being tackled by police

UPPER WEST SIDE, Manhattan (WABC) -- A chaotic scene broke out while police were on the scene after a person was shot on the Upper West Side of Manhattan.

The incident was reported Monday outside the Amsterdam Houses on West 63rd Street just after 4 p.m.

Officials say 27-year-old Joshua Wiley was shot at the location, but was taken to the hospital and is expected to survive.

During the course of the investigation, a number of people were taken into custody.

Raymond Johnson, 28, somehow escaped from the back of a police car while in handcuffs, but was soon stopped in the middle of the intersection and tackled to the ground by multiple officers.

Johnson struggled with the officers before being taken back into custody and literally carried away.

The officer caught on camera tackling the suspect was treated for a leg injury.

The victim, Wiley, allegedly picked up the gun and fired a shot as well. He's facing two counts of criminal possession of a weapon and reckless endangerment.

Jesse Miranda, 30, is charged with assault.

All four men will be arraigned later Tuesday.

An investigation is being conducted as to whether or not Johnson was rear cuffed, before his attempted escape.