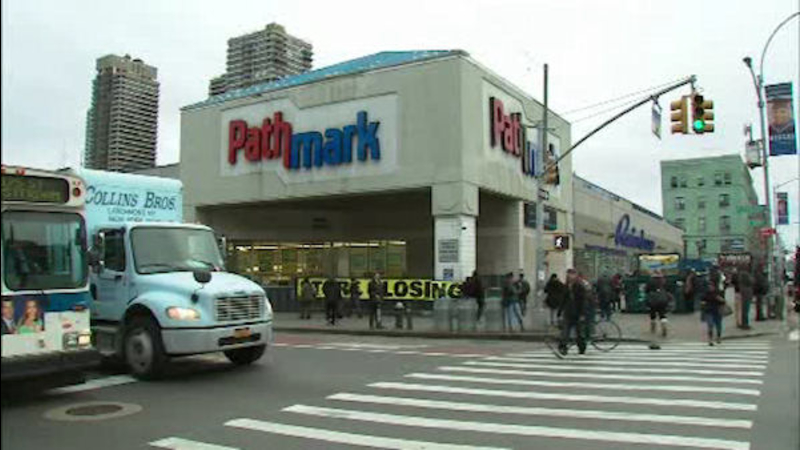 EAST HARLEM (WABC) -- There is controversy in East Harlem as the community's first supermarket, Pathmark, will close this weekend.

The block-long site has been sold. The market served 30,000 customers a week.

Back in 1997, Eyewitness News was there as crowds of smiling faces including Mayor Rudolph Giuliani celebrated the ground breaking of the Pathmark.

But now that picture of excitement has been replaced by the sign, "Store Closing".

What was once a bright spot in this community chronically under-served by supermarkets is now closing its doors.

"I would get my French-cut lamb chops here, different things that you can't buy in the local stores," said Asia Dogostiano, a customer.

She was among those who came to the supermarket for fresh, affordable food. The question they have, where do they go now?

"We have the regular corner stores but they don't sell what Pathmark carried, so it's not the same," said Kimara Brown, a customer.

East Harlem Abyssinian Triangle was majority owner of the property.

Last year they sold the building to a development company called Extell for $39 million.

Reverend Calvin Butts, head of Harlem's Abyssinian Baptist Church, and chairman of Abyssinian Development, says they had no choice.

"One of the partners decided that they needed their money, they had to pull it out and we had to give it to them according to the relationship," Butts said.

Rev. Butts wanted to make it clear, the sale is not the reason for the stores closing.

A & P, the parent company, filed for bankruptcy back in July. And as result, several of its grocery stores have been a casualty.

There is still no official word on what will replace the 68,000 square foot property, and that has advocates like Nicholas Freudenberg, a public health professor at Hunter College, concerned.

Dozens of people came to the meeting to hear what city leaders are doing bring fresh, affordable food to the neighborhood.

Mark-Viverito says they hope to another grocery store can take over the space.