7 On Your Side: Business owners scammed into paying for posters that are free 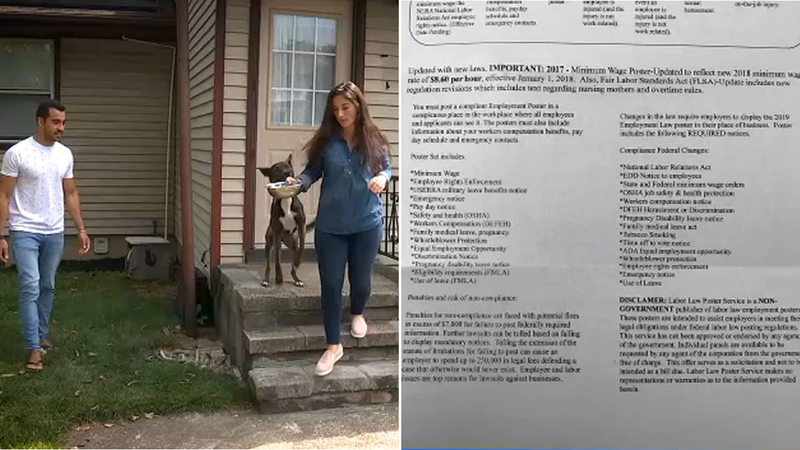 7 On Your Side: Business owners scammed into paying for posters that are free

BRICK, New Jersey (WABC) -- Hundreds of small business owners are getting official looking letters putting them on notice to shell out $100 or risk getting fined thousands by the government.

But 7 On Your Side investigated and discovered the urgent warning wasn't true.

Born out of love for her rescue pup "Piper" who was having digestive issues, Katherine Ernst decided to start marketing a healthy dairy-free, organic, frozen dog treats.

She started working on a way to market her dog treats, developed a website and registered her brand new business, "Bark and Bites," with the state. Within a week, she received an official looking letter complete with her new business ID.

"I thought it was from the Department of Labor," Ernst said.

The letter said federal laws would be violated if she failed to display a poster warning employees of labor laws. If she didn't comply, the fine could be $7,000.

"I was worried someone could come knocking on the door and if I don't have the proper setup, I could have a $7,000 fine," she said.

The solution was to mail a $105 check for the poster, but she paused before she paid and called the Department of Labor directly, where a man said he didn't know who the letter was from but the DOL would never mail it out.

Upon closer scrutiny, the solicitation stated it was from a "non-governmental publisher" and on the back it said you could get the posters from the government for free.

It's a similar scenario first-time home-buyers faced on Long Island when they received letters from the "Star Exemption advisor" charging excessive enrollment fees for what's free.

7 On Your Side fought to make the "advisor," Arie Gal, change his letter look and include warnings

Gal was charged with scamming thousands of homeowners and ordered by the New York State Attorney General to pay back almost $1 million and dissolve his company.

We tracked down the owner of company who sent Ernst the letter. The return address is in Princeton, but it turns out the young entrepreneur, named Ceazer Estevez is from Florida. He said he sent out 300 mailings, targeting only new businesses in New Jersey he got off the state registry, and got back 70 checks -- a total of $7,350 for something that should be free.

"I wanted to warn others, just double check, make phone calls, trust you gut instinct," Ernst said. She also learned that because she has no employees and works out of her home, she doesn't even need to post labor law posters.

The owner apologized for the misleading mailing and said he would re-work the wording to put information on how you can get posters for free on the first page.

And he promised to send out letters to the 70 businesses who paid and offer refunds.