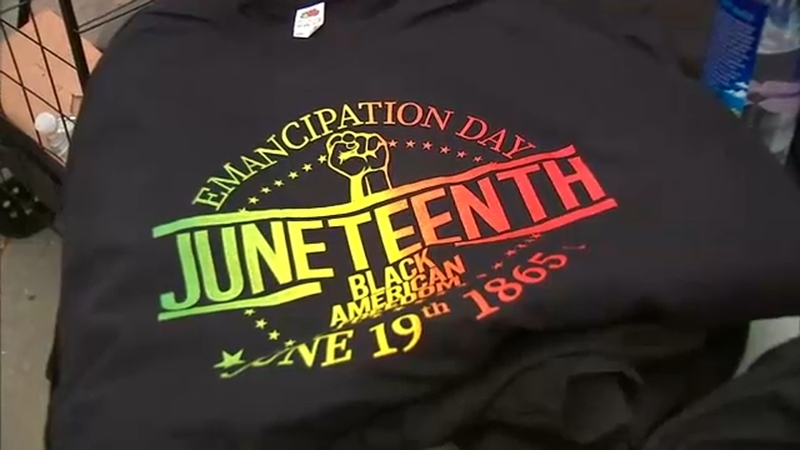 NEW YORK CITY (WABC) -- Across New York City and the Tri-State area, celebrations on Saturday marked Juneteenth - the emancipation of enslaved African Americans - including events in Times Square and in Harlem.

Juneteenth was officially declared a national holiday this week, and people have quickly pulled out all the stops to mark the huge occasion.

Broadway brought the stage to the community to commemorate the end of 400 years of slavery in America with a 90-minute performance in Times Square.

The Broadway League organized its inaugural Juneteenth event as part of its 'Black to Broadway' initiative - an effort to make broadway more accessible to everyone.

"Broadway League wanted to at the forefront of celebrating Juneteenth now and we're very, very grateful for it to bring all the people of Broadway - Black, brown, white, short, tall - all together to unite and enjoy," Brian Moreland of Broadway League said.

The social unrest and recognition by New York last year inspired many like the Broadway League to commemorate this historic day, but Juneteenth has been part of the fabric of many Black communities for years.

"Juneteenth for me has been a time for me to reflect, to connect to my ancestors," Athenia Rodney, Chief Event Officer of Umoja Events, said.

This is the 12th year that Rodney has put on the Umoja Events' Juneteenth celebration.

This year's event was bigger than ever at Herbert Von King Park in Brooklyn with an estimated 2000 people in attendance.

"Juneteenth growing in this expansion is a start of what we know what can happen in the world but we need to do more," Rodney said.

Organizers hope juneteenth continues to unite the community and bring about positive change.

Governor Andrew Cuomo announced 11 landmarks across the New York state would be lit in red, black, and green in celebration of Juneteenth.

"New York is proud to join the entire country in our first national commemoration of the emancipation of enslaved African Americans," he said. "While Juneteenth may be our newest federal holiday, the ethos we observe today - that independence, equality, and liberty for all are only guaranteed when we march as one towards those ideals; that the arc of the moral universe only bends towards justice when we work together to bend it - has always been the foundation of our national identity. I was proud to make this a state holiday last year because New York has always, and will always, stand with and support all those working to help our country live up to its founding ideals. Our thoughts are with all those who worked so hard and for so long to bring today's national celebration to fruition."

The holiday observes June 19, 1865, when a Texas general told enslaved African Americans they were free.

The Emancipation Proclamation was passed a few years before then, but slaves weren't freed until the end of the Civil War.

Many have made a strong push to make Juneteenth a holiday, and it has finally happened.

In honor of Juneteenth, we're telling stories of what Black freedom means today, from a 94-year-old's quest for a national holiday to the fight for reparations to cultural celebrations. Click here for more stories from your city and around the country.