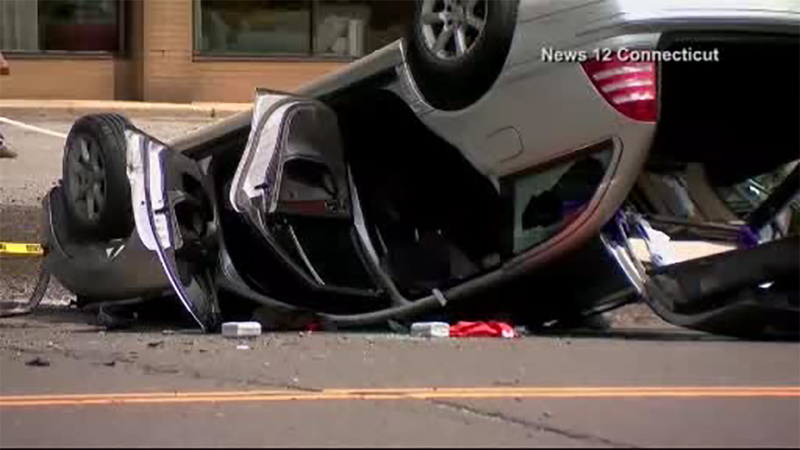 WESTPORT, Connecticut (WABC) -- A former prisoner passed up a job interview to save a stranger's life, and now, a Connecticut community is rallying behind the good Samaritan.

Aaron Tucker was en route to his interview when he saw an overturned vehicle and rushed in to help the hurt driver out of his vehicle.

"Someone needed my help, and that's what I did," he said. "I helped them."

Tucker is humble, soft spoken and doesn't want to be called a hero, though many would disagree. Tucker was on a public bus traveling through Westport Wednesday when it came upon the overturned car on Post Road. He sprang into action.

"I asked the bus driver, 'Are you going to help?'" he said. "He said, 'No, and if you get out, I'm going to leave you.' I seen the car smoking up, and the bus driver was still talking. The car started smoking, so I just ran out."

He showed no hesitation, though there were potential consequences. Tucker was on his way to a job interview in Stamford, something crucial to turning his life around after the 32-year-old served nearly two years in prison on a weapons charge. Since June, he has been living at a halfway house in Bridgeport.

He and two workers from a nearby auto repair shop extricated the 61-year old driver, who may have suffered a medical emergency.

"What I did was I got inside the car as quick as I could and helped him get the guy out," said good Samaritan Paul Szegedy, one of those repair shop employees. "The biggest problem was getting his legs out."

Tucker was happy he could help.

"It's all right to hear people saying I'm a hero, that's their point of view," he said. "But to me, if it happened again, I'm going to continue to do it, because it's the right thing."

"It was amazing," resident Karin Dale said. "He had places to go. He had a job interview, and he stopped and helped when he didn't have to."

She decided to help, starting a GoFundMe page that has already raised more than $15,000.

"He's just a nice guy who just wants to be a good dad for his son," Dale said. "When he talks about his son, you can hear him beaming through the phone."

The experience has been humbling for Tucker.

"I feel that they're better people than me, taking the time out to help me and my son," he said. "I appreciate that."

Tucker insists he's not a hero, but he does want to be one to his son. He is promising to use some of the money raised to start a college fund.
Report a correction or typo
Related topics:
societywestportgood samaritanaccidentcrash
Copyright © 2021 WABC-TV. All Rights Reserved.
More Videos
From CNN Newsource affiliates
TOP STORIES