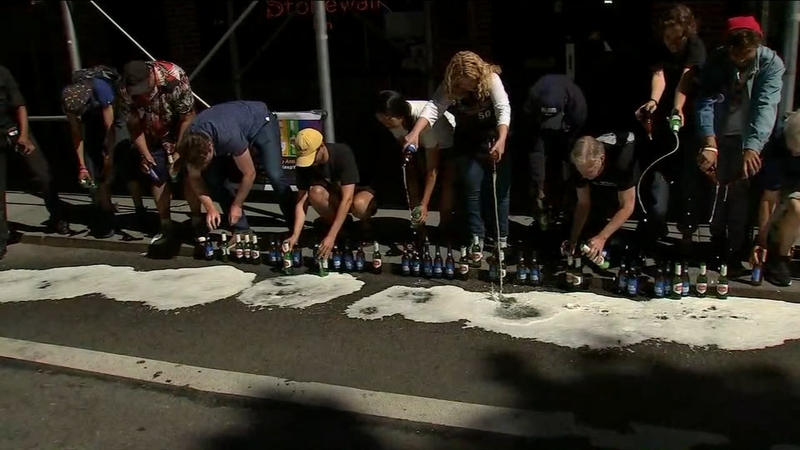 GREENWICH VILLAGE, Manhattan (WABC) -- LGBT activists poured out cases of Anheuser-Busch beers into the gutter outside of the historic Stonewall Inn Wednesday in protest over the company's donations to certain lawmakers.

Stonewall co-owner Stacy Lentz says that since 2015, the company has given more than $35,000 to politicians who have supported bills that are clearly anti-transgender youth.

As a result, the company's products will be banned at the Stonewall until it stops donating to these legislators.

When Yvonne Ritter was 18, she celebrated her birthday at the Stonewall Inn on the night of the riots.

"You can't say that you support the LGBT community in one breath and then donate to people who are against us in the other breath," Lentz said. "It's not right, and we at the Stonewall Inn had to take a stand on behalf of our community."

Lentz says there is an opportunity for Anheuser-Busch to change and open a dialogue with the LGBTQ community.

She says the company could also help lobby for the Equality Act, which would give federal civil rights protections to LGBTQ people.

Through its nonprofit arm, The Stonewall Inn Gives Back Initiative, Stonewall recently launched the Safe Spaces program, which identifies and certifies entertainment venues, food and beverage locations, stores, businesses, and other public venues as Safe Spaces for LGBTQ people.

Under its criteria for certification, businesses that donate to anti-LGBTQ lawmakers do not qualify for designation as a Safe Space.

Anheuser-Busch released a statement in response to the protest.

"Our company and our brands are focused on making a positive and lasting impact when it comes to issues of equality," it read. "We're proud of our 22-year partnership with GLAAD, an organization working to shape the narrative and encourage dialogue around LGBTQ+ acceptance, and we are proud to have received a perfect 100% score from the Human Rights Campaign's Corporate Equality Index for LGBTQ Equality. We support candidates that support the beer industry and the millions of jobs that it creates."

Marcus Solis reports on the vandalism from Rye.