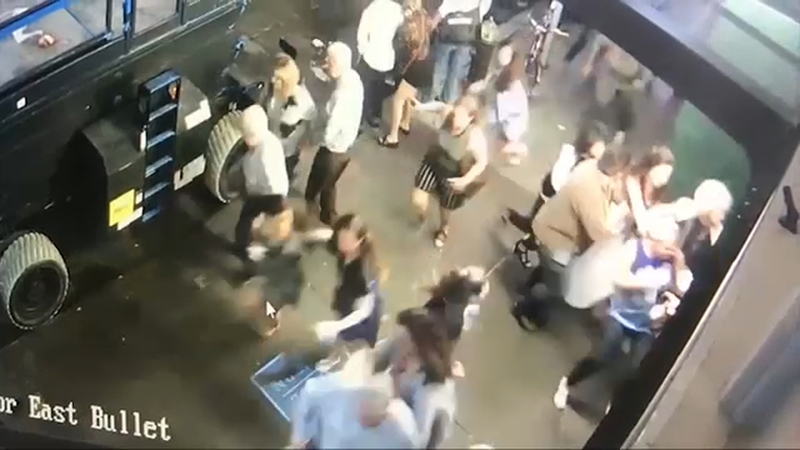 TIMES SQUARE, Manhattan (WABC) -- The FDNY says nine people were treated for minor injuries after the loud backfiring of motorcycles caused quite a scare in Times Square on Tuesday night.

The incident just before 10 p.m. led people to believe gunshots had been fired.

People began to run and even shelter in stores.

There were no shots fired but the loud noise did cause a great deal of alarm following the mass shootings over the weekend in El Paso and Dayton.

"All of a sudden I heard this kind of muffled pop and said what was that, and I looked over and there was just a sea of people running," said witness Dylan Probert. "I had one or two seconds to think, is this really happening?"

The NYPD received multiple 911 calls but tweeted that there was no active shooter, saying "Please don't panic. The Times Square area is very safe!"

There is no #ActiveShooter in #TimesSquare. Motorcycles backfiring while passing through sounded like gun shots.

According to a customer, the Disney store directed customers to the back as a precautionary measure.

At the Disney Store in Times Square when a backfiring motorcycle was mistaken for gunfire. Staff kept all customers safe and were clearly well prepared. pic.twitter.com/e4A38Fzjw6

Of the nine injured, ranging in age from a 12-year-old girl to a 79-year-old woman, the most serious injuries were a broken wrist and fractured kneecap

Police will continue to look for the motorcyclists through the use of cameras and license plate readers. But the NYPD legal department advised detectives it is unlikely the motorcyclists could be charged in connection with the crowd reaction.

On Wednesday, the NYPD said the incident "was not a bad thing."

"To the untrained civilian and with the 24-hour news cycle that goes on and the tragedies in Dayton and in El Paso this is on everybody's mind," said NYPD Chief of Counterterrorism James Waters.

While the ensuing panic caused a few minor injuries Waters told ABC News the public did the right thing.

"They correctly ran," Waters said. "Run and put distance between themselves and those sounds."

The police department has been imploring the public to be aware of their surroundings.

"Awareness of the public is something we've been striving to achieve for a very, very long time," Waters said. "People hear those noises, have the psychological concerns of 'Are we in the middle of an active shooter?' They did exactly what we train them to do: run. If you can run, run. If you can't, hide and if all else fails, fight and fight for your life because that's what it will be about."

Surveillance video obtained by Eyewitness News showed people running for their lives into a restaurant on West 47th Street, convinced there was an active shooter.

In exclusive footage from O'Lunney's Pub, manager John Galgey is seen out front, helping people get inside.

"People were like, maybe a shooter or something like that, there was a lot of people running frantically," said Galgey.

He said one woman holding a little girl was terrified. "I told her to go in the back and take as long as she wants, the little girl had a lot of anxiety," he said. "Others stayed longer, tried to contact friends they had lost."