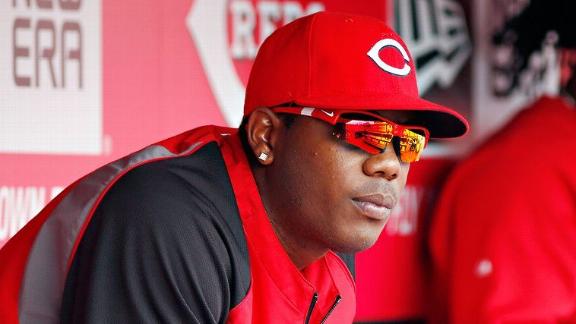 Cincinnati Reds closer Aroldis Chapman, who has been on the disabled list since being struck in the head by a line drive on March 19, faced live hitters Wednesday for the first time since the incident.

Chapman, who suffered fractures near his eye and to his nose along with a mild concussion after being hit by a drive off the bat of Kansas City's Salvador Perez, threw 27 pitches during early batting practice from behind a protective screen.

The next step is for him to throw batting practice without the screen sometime this weekend when the Reds visit Atlanta.

"I felt pretty good," Chapman told reporters. "I didn't feel anything out of the ordinary. I just felt very good."

Brayan Pena was one of the batters to face Chapman.

"He was attacking the strike zone," Pena said, according to the Cincinnati Enquirer. "His fastball was electrifying. It was exciting to see him go back there. His confidence was very good. That was a great sign."

Jonathan Broxton has taken on the role of closer in Chapman's absence and has registered three saves while not allowing a run in four innings of work.