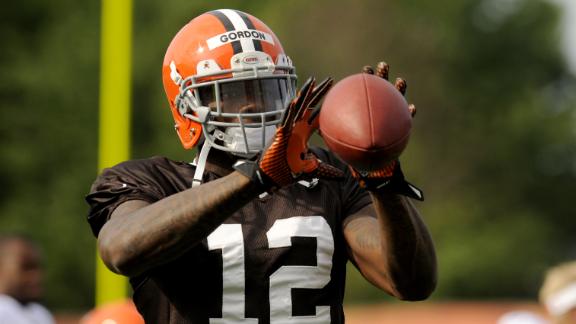 "I'm not exactly sure of his exact itinerary there, who he's meeting with," coach Mike Pettine said Friday.

No decision on Gordon is expected for several days.

NFL commissioner Roger Goodell was not at the hearing but said he'd be happy to meet with Gordon if needed.

"You've got to deal with the facts, OK?" Goodell said. "Now, when we have a drug program that's collectively bargained, and it has a step process, it takes four incidents before you actually reach a suspension in a drug-related case.

"If it's their first offense, someone who has had a strong background of being very responsible in the community and doing the right things and not violating either policies or anything else that would reflect poorly on the NFL, then we take that into account. When there's a pattern, we also take that into account on the other side."

Gordon faces the ban for a positive marijuana test in the offseason, a test Gordon's side contends was barely over the limit with differences in numbers among urine samples caused by secondhand smoke.

The Browns have practiced without Gordon for two days. Pettine wouldn't say if Gordon would be back for Saturday's intrasquad scrimmage at the University of Akron.

"I'm being 100 percent honest when I say we really haven't been thinking about it," receiver Andrew Hawkins said. "There are so many other things to worry about at this point. I'm wishing for the best for Josh. Obviously, we'd love to have him and that's what we're hoping for. But we got so much work to do. I got these plays to figure out and getting this offense, so it's kind of like in the back of my mind."

Despite being suspended without pay for two games and losing two additional game checks last season for an earlier violation of the league's drug policy, Gordon led the Browns with 87 receptions and had nine touchdowns. He led the NFL with 1,646 receiving yards and became the first player with consecutive 200-yard receiving games.

Gordon had drug-testing problems in college as well. He was dismissed from the team at Baylor after being suspended twice for marijuana use. He transferred to Utah but didn't play there after failing another drug test.