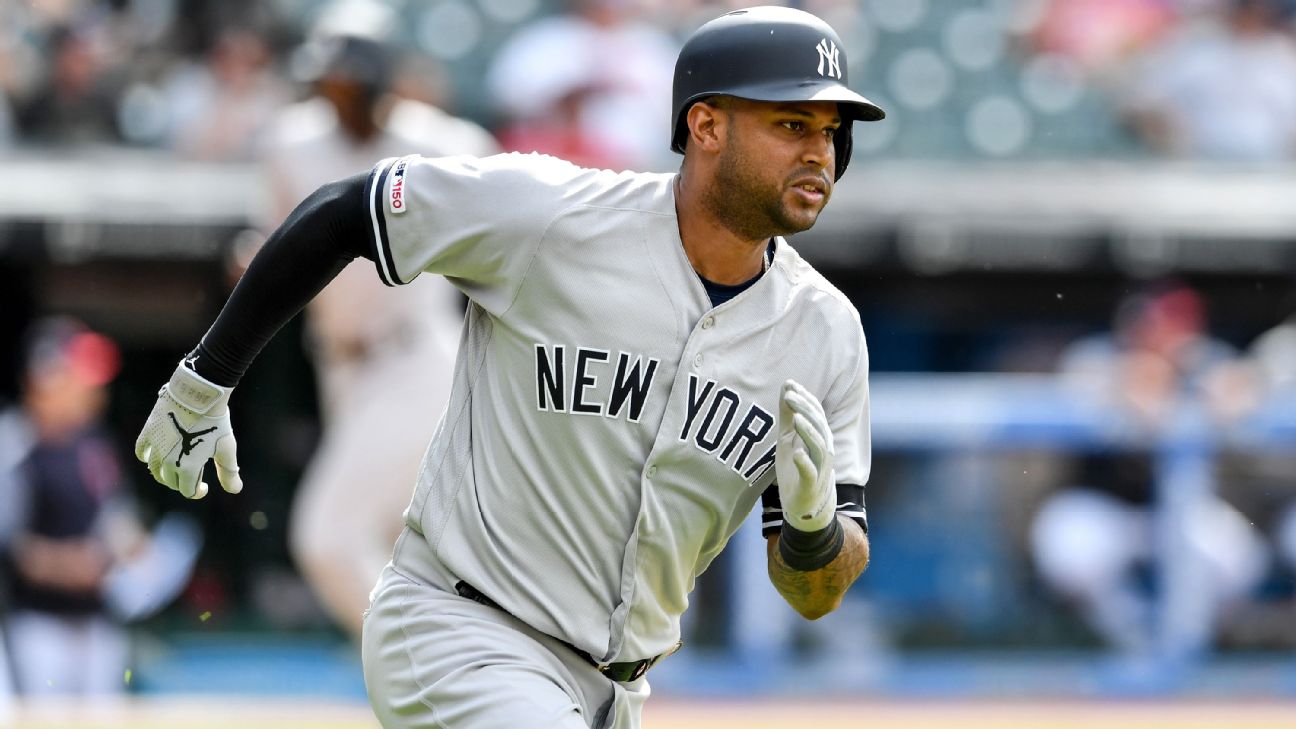 The normally reliable bullpen was shoddy. The clutch hits that had become a major part of the Bronx Bombers' identity in May suddenly were nonexistent as June began.

So Sunday in Cleveland, as they went into their final game of the trip and prepared to head home with one of the biggest interleague series of the year looming, the Yankees were hell-bent on giving themselves something to smile about during the hour-and-a-half flight back to the Big Apple.

There were grins galore in the Yankees' clubhouse after they gritted out a tough 7-6 win-- a seesaw game that might be one they look back on later in the year.

In the short term, the victory, though by no means an easy one, comes as a relief. It took extra innings, a lost five-run lead, a pair of hard-hit drives to the wall and one player's career first in order to make it happen.

"These are games that you need throughout a season to kind of keep it to where you still have a fight," center fielder Aaron Hicks said. "When you play a team that has a fight, it really shows what kind of character you have as a team and it just helps you in the long run."

Weather permitting, Hicks' squad may be in for another two dogfights Monday and Tuesday, when the New York Mets cross boroughs to visit Yankee Stadium. The Mets are not having as good a year as the Yankees, but these series are typically must-see TV.

The forecast is calling for a near-100 percent chance of rain both days. But assuming the first edition of this year's Subway Series goes off as planned, Yankees manager Aaron Boone is anticipating a natural segue from Sunday's contest, which he said left him "proud" of his team.

"It's something different that in a way can get your juices flowing a little bit, knowing you're playing the other team you share the city with," Boone said. "Those kind of series and games in the course of a long season are fun to be a part of. You can tell in those games, and you can feel in those games, that it does matter to a lot of people and those are fun things to be a part of."

Fun is something the Yankees weren't having a whole lot of this time a week ago.

Fresh off a Sunday night loss to the Boston Red Sox that hinged primarily upon three error-filled outfield plays, the attention going to Toronto last Monday and Tuesday was on Clint Frazier's miscues and his decision to avoid speaking to reporters about them. Then, when he did finally talk, the focus turned to the fallout of an interview session in which he lamented the way he had been covered in the past.

While the players and coaches might say the off-field storylines had no bearing on their play, there's no denying the 180-degree turn they took, beginning with last Sunday's loss. After winning 32 of 43, mostly with a beat-up team of backups, the Yankees dropped four of the six games they played in Toronto and Cleveland -- a stretch so bad Brett Gardner needed stitches after throwing his helmet in the dugout and having it bounce back and hit his lip.

That made this Sunday's win all the more satisfying.

"This was a very hard-fought game," Hicks said. "That was what we needed. We needed a win to end this road to trip and to head back home."

It was Hicks' 10th-inning double to the base of the wall in left-center that gave the Yankees their crucial seventh run, the eventual game winner. The hard-hit liner plated Cameron Maybin, who had reached scoring position by scorching his own double to the wall in center with a similar 100 mph-plus exit velocity.

A half-inning later -- with closer Aroldis Chapman burned after a blown save that featured shortstop Didi Gregorius uncharacteristically booting a ball on what should've been a game-ending, ninth-inning putout -- the Yankees were forced to turn to 26-year-old lefty reliever Stephen Tarpley. Called up Sunday morning for just the second time of his young career, Tarpley was in line for his first career save.

With three straight strikeouts, including one in a full count against Carlos Santana, Tarpley got it.

"When he needed to make a pitch, he was able to do it," Boone said. "Obviously thrown in about as tough a situation as you can be in there, and for him to be able to come in and make a 3-2 pitch and execute a slider to Santana to get him."

As soon as the game-ending 80.7 mph inside slider to Cleveland's Jordan Luplow settled into catcherGary Sanchez's mitt, Tarpley let out a yell that energized his teammates as they came running up to him.

"Everything kind of went dark there right afterwards," Tarpley said. "I jumped up and everybody disappeared."

Around 10 the night before, Tarpley got the call that he would be coming up to replace injured starting pitcherDomingo German, who went on the injured list with a hip injury. By 4:30 a.m., a car service SUV dropped off Tarpley at the Yankees' team hotel. Before arriving at Progressive Field a few hours later, Tarpley had about 3-4 hours of sleep.

"Wasn't feeling a bit tired when I was out there [pitching]. I can tell you that much," Tarpley said.

After recording the final out, Tarpley returned to the clubhouse, where teammates handed him the wrestling-style championship belt bestowed upon the player of the game.

"Everybody was dapping me up like, 'Hey, that's what we're talking about,'" said Tarpley, who had a 10.38 ERA in his previous big league stint this season, which followed a dominant spring training. "It was like everybody was really happy to see where I was at last year and [back] the way I was performing in spring training.

"I was like, 'Hey, I'm back and I'm not playing around anymore.' That first month I was kind of finding my feet out there, and whatever happened, happened. But that's in the past. Now we can get rolling."

Last week, too, is now in the past. Frazier, who has hits in six of his past seven games, nearly became the story of Sunday. His seven-day arc of goat to hero ended with a bases-loaded, ninth-inning sacrifice fly that, had it not been for Gregorius' error, would have put New York on top for good.

Gregorius was playing in just his third game of the season. His error was the only real blemish on the Yankees' day, but his teammates and manager were quick to pick him up, much the way they did for Frazier last Sunday.

"No one we'd rather have the ball hit to," Boone said. "I was telling somebody, if we had a nickel for every time we say, 'Hit it to Didi, hit it to Didi,' over last year and this year, I'd have a lot of nickels. So I look forward to it being hit to him again."

Gregorius will have his share of chances to prove Boone right this week and beyond, starting -- weather permitting -- with his 2019 Bronx debut against the rival Mets. 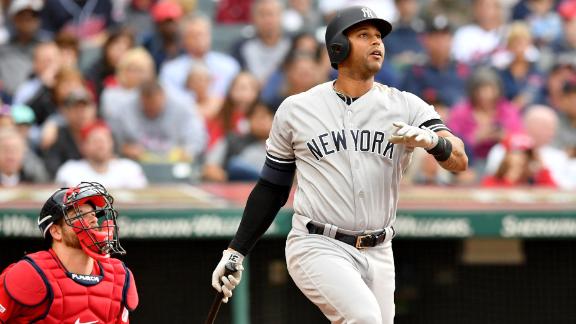 Hicks doubles in extras as Yankees defeat Cleveland
Aaron Hicks hits a go-ahead RBI double in the 10th inning to give New York a 7-6 lead over Cleveland. 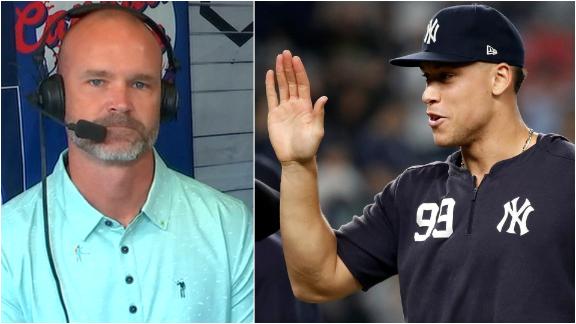