Chris Froome drops out of Tour 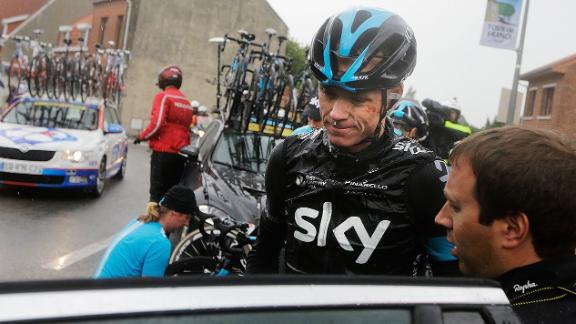 ARENBERG, France -- Defending champion Chris Froome quit the Tour de France on Wednesday after crashing twice as a nervous pack neared seven patches of bone-jarring cobblestones in the rainy and slick fifth stage of the race.

The withdrawal of the 29-year-old Team Sky leader, the favorite to win again this year, leaves the three-week race wide-open. Froome's tumbles were but two on a day when many riders skidded out of control and crashed, including overall race leader Vincenzo Nibali of Italy.

Froome addressed his withdrawal in a series of tweets Wednesday.

Devastated to have to withdraw from this years TDF. Injured wrist and tough conditions made controlling my bike near to impossible.

- Chris Froome (@chrisfroome) July 9, 2014Thanks to the team & support staff for trying to get me through today. Wishing @richie_porte & @TeamSky the best for the rest of Tour!

- Chris Froome (@chrisfroome) July 9, 2014Race organizers, sensing the dangers even before the stage began, scrapped two of the planned nine cobblestone patches that the peloton was to cover and reduced the total length of the stage by 3 kilometers (1.9 miles) to 152.5 kilometers (94.8 miles), as a result.

Aside from Nibali and Froome, an array of big-name riders went down but kept going. They included Americans Andrew Talansky and Tejay van Garderen, Jurgen van den Broeck of Belgium, Alejandro Valverde of Spain and German Marcel Kittel, winner of three of the first four stages so far.

The chaos was likely to raise questions about racing on the course in such poor conditions, even with two of the cobblestoned sections cut.

Froome began the day already nursing pain in his left wrist from a crash a day earlier. He went down again early in the route from the Belgian town of Ypres to Arenberg-Porte du Hainaut in France, scraping his right side.

Then, just before the first patch of cobblestones about halfway through the treacherous stage, the Kenyan-born Brit took another spill. With a cut under his right eye, he limped over to a team car, climbed in and left the race.

"It's devastating for Chris and for the team," Team Sky boss Dave Brailsford said. "We really believed in Chris and his ability to win this race. But it's not to be this year.

"When you have a day like today, when you have a setback, you have to roll ahead and go again, you have to recalibrate your goals. Richie Porte came on the Tour to be the team leader No. 2, and he showed great ability to ride the cobbles the way he did."

According to French cycling-statistics provider Velobs.com, the last time a defending Tour champion abandoned the race during his title defense was five-time champion Bernard Hinault of France in 1980.

Froome had said before the stage that the biggest concern about the seven cobblestone patches on Wednesday's route was not riding over them, but the nervousness of the pack as riders jockeyed to get up front, which is considered the safest place to be.

"We have to be calm. The road to Paris is very long," he said. "Cycling is made of crashes, and we have to take that into account."