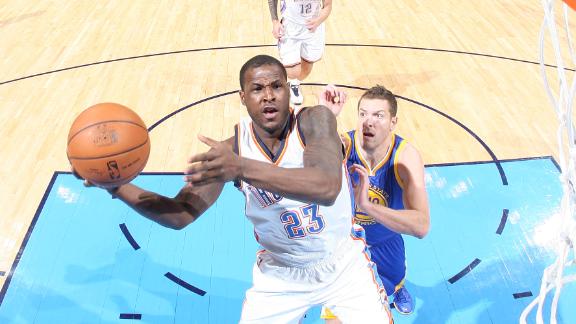 CLEVELAND -- Less than two weeks after being traded to the Oklahoma City Thunder, Dion Waiters was back in Cleveland on Saturday, preparing for Sunday's game against his former team.

While LeBron James acknowledged shortly after the trade, which ended up netting the Cavaliers J.R. Smith and Iman Shumpert and a first-round pick it then used to acquire Timofey Mozgov, that it "didn't work out" with Waiters in Cleveland, the third-year guard doesn't consider himself a scapegoat for the Cavs' early-season struggles.

"That's what comes with it, man," Waiters said after going through drills at Quicken Loans Arena on Saturday. "I've been through more fire than that before. I've been through tougher times than that. So, that's nothing to me.

"I ain't really care what nobody say. It ain't affect me. I slept good every night. I slept good every night. So, I mean, that's what comes with the territory. That's what comes with it when you got somebody like LeBron who brings all that attention around the team when we wasn't used to having that. So the littlest things that you do, they be like the biggest. It's so crazy. But it is what it is. I'm not in that situation anymore. Over here it's still the same situation, but it's different. I'm happy, I'm comfortable already two weeks in and I feel like I've grown. I've grown in a short period of time as a player and off the court."

The difference is in the win-loss column. The Thunder are 5-3 since acquiring Waiters. The Cavs are on an upswing as well, winners of five in a row.

Waiters called Sunday's matchup a "regular game." He said he could see the trade coming and added he didn't have any hurt feelings about being dealt by the team that drafted him No. 4 overall in 2012, other than the timing of it occurring when he was about to start for Cleveland in his hometown Philadelphia.

"I didn't really care about being traded," Waiters said. "I just wanted to play at home in front of my family and friends, go out there and have fun for the last time (with the Cavs), and I couldn't get a chance to do that. That's the only thing that I ain't like. But everything else, I was fine with."

Waiters said he has kept in touch with former teammates Tristan Thompson and Kyrie Irving since the trade but hasn't heard from James.

"Sometimes things happen for a reason," Waiters said. "I ain't a guy that's going to sit back and dwell on it or say, 'I wish I would have done things like this.' Sometimes things happen for a reason. And that's the only thing I can honestly say. You got to keep it moving, keep it pushing and just wish the best for everybody in situations like that. And I think in certain situations like this, it helps you. It helps you grow, mature and just to get a chance to see different things -- a different city, different fan base.

"Like I said, I'm blessed because I went from a great organization to another great organization where I know I can learn, become a better player. I already think I became a better player. I got a coach that lets me go out there and just play my game and I don't got to think, I don't got to second guess myself. He's a guy that wants me to be aggressive. He wants me to attack, things like that. So I think it worked out for everybody."

"Dion's been great," Brooks said. "I've enjoyed getting to know him the last two weeks. He's a quick learner. He still has things that he's going to have to work through with our team. I'm going to have to continue to explore different ways that we can utilize him, but I like his competitiveness. He's been great. We've only had a few practices ... but during those practices I liked what he was doing. His habits were good. He was getting after it. He was making plays. But as this season goes, his role has been very important for us."

While Brooks said Waiters has willingly accepted coming off the bench -- something he sometimes balked at in Cleveland -- Waiters did already cause a bit of a stir when he compared his Thunder teammates to his time with the Cavs to the Oklahoman newspaper. "Listen, they give me the ball," he was quoted as saying. "Like, I touch the ball. Like, I actually, like, you know, touch the ball."

When asked about the statement Saturday, Waiters claimed he was misquoted, an excuse that he was known for using during his time with the Cavaliers.

"They blew that out of proportion, like 'I actually touch the ball.' I didn't say it like that," Waiters said. "I said, 'I gets the ball, you know, I get to feel it. I get to feel a game out.' Things like that. That's what I said. You know, they took it and they twisted it around a little bit. It happens. I guess they knew I was coming back home. We needed a story to talk about."

Waiters attributed the Cavs' slow start to unrealistic expectations for such a new team.

"I think everything just happened so fast," he said. "I don't think as far as like the media and expectations, it happened so fast. And with that pressure and things not working out, I think everybody expected us to go 40-0. It was unrealistic because you got a whole new group of guys who have never played together before. We knew it was going to take time. We knew that we needed practices and things like that so we could all mesh."

While his relationship with James has apparently ended, Waiters explained why reigning MVP Kevin Durant has embraced him.

"From the outside looking in, he probably saw how things were looking or how I'm always the odd man out and things like that. How it was going, how my name was always in something and half the time it probably never was me," Waiters said. "I was that guy who you point the finger at, but I was fine with it. I could take it. I didn't have no pressure on me. I didn't have no pressure on me. My job is to go out there and play basketball, get as many wins as we can as a unit and unfortunately, it didn't work out. And I think the organizations made great decisions on the moves and it's helping both teams."