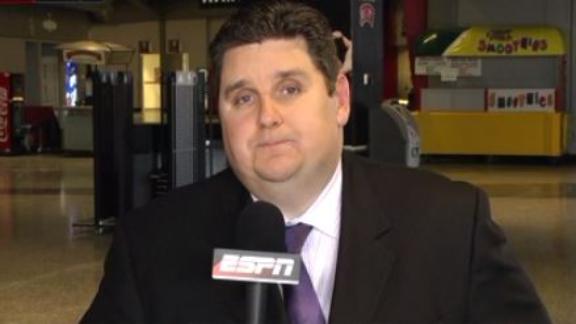 After the NBA moved the 2017 All-Star Game from Charlotte, North Carolina, because of the league's objection to the state's House Bill 2, the league issued a statement supporting theHornets. However, one of the team's owners is not ready to praise the league.

"It is also important to stress that the City of Charlotte and the Hornets organization have sought to provide an inclusive environment and that the Hornets will continue to ensure that all patrons -- including members of the LGBT community -- feel welcome while attending games and events in their arena," the league said.

The Hornets and chairman Michael Jordan even issued a statement on Thursday saying "we understand the NBA's decision" and are "pleased that the NBA opened the door for Charlotte to host All-Star Weekend again as soon as an opportunity was available in 2019."

Later, however, Hornets co-owner Felix Sabates sent an email to the ownership grouping blasting the league and the Charlotte City Council.

"Shame on those responsible for such a short sighted decision to take the NBA All Star away from Charlotte I always thought this was country that ALL peoples not just a few can determine our future," he wrote in the email that was obtained by the Charlotte Observer.

HB2 reversed a Charlotte ordinance that added gay and transgender people to the list of classes of people protected against discrimination in the city.

"Our Mayor opened a can of worms, who knows why?" Sabates wrote. "One Our city council is the one to blame for our losing the NBA All Star game, none of this would have happened if not for a very few minority forcing our supposed city leaders into creating a problem that never really existed, there will always be another election, they better pray a very few can get them re-elected."

"What is wrong with a person using a bathroom provided for the sex the were born with, if you want to change your gender so be it, we are a free county, but don't force 8 years old children to be exposed to having to share bathroom facilities with people that don't share the organs they were Bourne (sic) with, this is plain wrong, this could cause irreparable damages to a children's that don't understand why they have to see what God did not mean for them to witness, we have some very confused business as well as political humans that frankly have made this a political issue rather then (sic) moral issues, SHAME ON THEM."