How Spencer Dinwiddie created his own footwear path 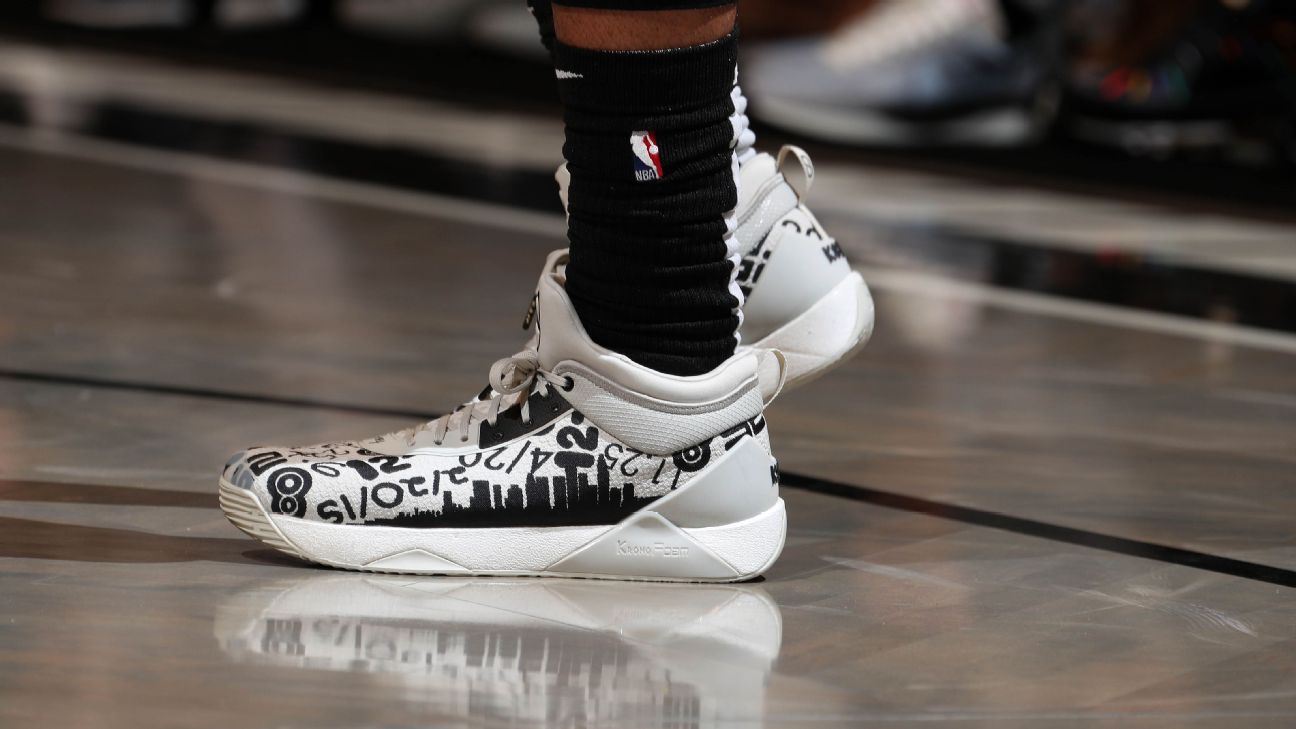 There are 16 active NBA players with their own signature sneaker, and three of them call Brooklyn home. Kevin Durant and Kyrie Irving have high-profile Nike lines, with regular releases of new models and colorways that drive millions of dollars in sales. Players around the NBA and at every level of basketball wear some version of the KDs or Kyries.

Two years ago, with no sneaker company clamoring to sign him, the former second-round pick decided to create his own signature shoe from scratch. He then used the proceeds from auctioning off his own game-worn sneakers last season to help pay for the college educations of two students.

"I used to draw shoes as a kid," Dinwiddie said. "It led me down the path of being creative and just wanting to do something new and have a little fun with it."

A conversation with his father in January 2017 served as the starting point for what turned into Dinwiddie's unique footwear path.

"You can do anything you want to do," encouraged his father, Malcolm.

"He told me the same thing that he's always told me in life," Dinwiddie said. "He's said that to me since I was born, whether I wanted to be president, or I wanted to be in NASA. Although I think they have a height requirement, so that was maybe kind of a lie on his part."

The 6-foot-5 guard -- yes, one inch too tall for NASA astronauts -- began working on sketches, concepts and updates, betting on himself. He partnered with Project Dream, a boutique production agency that helped provide the manufacturing infrastructure and factory access he was looking for.

Dinwiddie likes to point out that he had the idea before the spring 2017 launch of Big Baller Brand. The similarly self-created signature shoe company dreamed up by Lavar Ball and built around Lonzo Ball infamously introduced its first basketball shoe at a $495 price point, but its future is now marred in uncertainty. Lonzo recently joked that his ZO2 prototypes "just like, exploded" once he took them to the court during his Summer League debut.

For Dinwiddie -- who takes pride in his creative business endeavors -- creating his own shoe was never about the money.

"I wanted to push the limits of performance," he said.

"I've always loved shoes in general, and then I always love trying to boost my performance in whatever way possible," he continued. "With basketball being my passion, the most critical piece of equipment we have is shoes ... so I wanted to make a performance statement with it."

Historically, sneaker brands have turned to ancient Greek mythology or Latin phrasing for naming inspiration. Nike stems from the Greek "Goddess of Victory," while Asics speaks to a quest for "a healthy mind in a healthy body."

Dinwiddie went down a similar path, bridging the Greek word "Kairos," representative of "the convergence of optimal timing and maximum effort," with his jersey number 8 in place of the letter "a."

His grandmother and brother were both born on Dec. 8, the same day he signed his first contract with the Nets. He was also the eighth player drafted in the second round, which he uses as motivation to push himself toward a long career after being cut multiple times and spending time in the G League. The logo alongside the shoe merges his initials and number into one character. He first started sketching sneaker designs, fittingly, when he was 8 years old.

"I draw the shoe itself and the traction pattern, and then sit down with an industrial designer to put things together," he said.

For Dinwiddie, part of the appeal of the K8IROS project, as opposed to a traditional sneaker deal, was his thirst for more input, more knowledge and more understanding under the hood.

"There was no way I was going to build a shoe and not be hands on with it," he said. "I had to at least know most of what goes into it."

He instantly veers into a tech-heavy breakdown of his shoe's "high quality foam" dubbed "Chronofoam."

"Our foam midsole is actually made out of a special formulation of Pebax," he said. "It's about 50% lighter than expanded thermo polyurethane, or eTPU, which is [Adidas] Boost, with roughly 30% more energy return. The best foam on the market, or what a lot of people think, is Boost. Mine is far and away better."

This season, Dinwiddie is wearing a slightly updated version of his initial K8IROS design. The first version featured an elastic support band at the forefoot and a low-top silhouette. The new K8IROS 1.5 sticks with the same cushioning and traction platform, with a more plush sleeved tongue and a heel counter for added lockdown.

The shoes are purposely an open canvas, allowing Dinwiddie to showcase a variety of custom artwork on the upper side over the course of the year. Last season, he partnered with Los Angeles-based Troy Cole, aka "Kickasso," to develop 82 different custom looks, honoring everything from musicians to civil rights pioneers to Dinwiddie's favorite basketball players and even comic books.

"Iron Man and Black Panther are my two favorite superheroes," he said. "They're genius guys, and they're better than the average person because of their intellect. They're not aliens or something completely otherworldly. They have that humanity aspect, but what makes them special is their mind, more than anything else."

With the Nets' schedule in hand months before the season began, Dinwiddie strategically mapped out each game. He opted for a Harriet Tubman tribute in Washington D.C. and a Rosa Parks pair in Detroit, while also honoring Oprah, Barack Obama, Muhammad Ali, Martin Luther King and Langston Hughes along the way.

"A lot of it was to draw some attention to black history and black culture," he said. "I wanted to do something different and a departure from cartoons and tell a story. Hopefully there was one kid that I was able to inspire [to learn about them.]"

Each game-used pair was auctioned off on the Project Dream website afterwards. Most fetched an average of around $400, with the $760 Brooklyn city edition, $650 Stan Lee tribute and $630 Nipsey Hussle commemoration earning top dollar. The proceeds were used to launch the Dinwiddie Scholars program, which partnered with the United Negro College Fund to help provide educational opportunities to low-income students.

"My family has always been pretty charitable," he said proudly. "My great grandfather started a scholarship program at my church. My mom has a Ph.D in English, taught at USC and now owns a preschool. Children and education are huge core pillars of my family. I'm trying to just continue the Dinwiddie name in a proper way."

By season's end, the custom sneakers had tallied a nearly $30,000 total, helping to send one student each from Los Angeles and Brooklyn to college.

"That's special," said Dinwiddie. "Especially for someone that's not a LeBron-level player, where he can send a statement to the media and everyone will donate. For me to have that grassroots following ... being able to send a kid to college with that was pretty cool."

As he enters the second season of wearing his K8IROS sneakers on the uniquely hued hardwood of Barclays Center, Dinwiddie is raising the expectations for both his team, himself and his sneaker game.

"As a group, we've built one of the more technically advanced products on the market," he said. "It was more so about knowing that and trying to put our best foot forward to create something special, than caring too much about the critics saying, 'Ah, it's not Nike.'"

"Sometimes it's just about being comfortable," he continued. "At some point in time, you have to free yourself from that, and do whatever is fun and dope for you."
Report a correction or typo
Related topics:
sportsespnculturenbabrooklyn netsspencer dinwiddie
Copyright © 2022 ESPN Internet Ventures. All rights reserved.
TOP STORIES
Winter Storm Update: Tracking the nor'easter
Show of support at vigil for fallen NYPD officers Rivera and Mora
College student from NYC busted for selling dozens of illegal guns
Amy Schneider's historic 'Jeopardy!' run comes to an end
'Phantom of the Opera' makes history with 1st Black leading actress
Iconic White Castle in Queens closing after more than 8 decades
AccuWeather: Cold calm before the storm
Show More
Actor's viral video shines light on NYC shoplifting problem
Kathryn Kates, 'Orange is the New Black' actress, dead at 73
17-year-old arrested for carrying gun on subway train in NYC
2 juveniles arrested for fire that shut down major highway in NJ
Exclusive: OCME details painstaking effort to ID Bronx fire victims
More TOP STORIES News