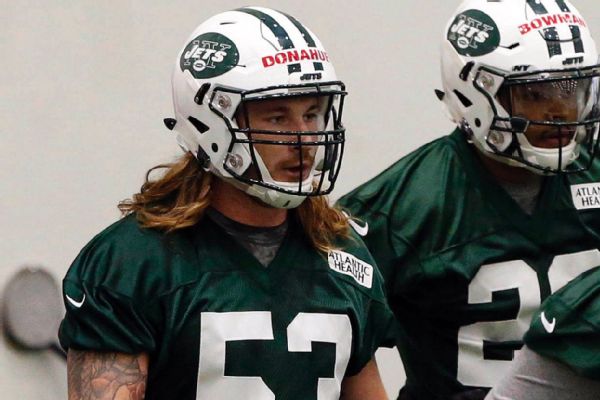 On Friday, Donahue received a three-month suspended sentence and a $1,000 fine for a DUI crash in his hometown, Billings, Montana. It stemmed from a May 9, 2017, arrest in which his blood alcohol level was 0.137, above the state's legal limit of 0.08.

That incident occurred 10 days after he was drafted by the Jets.

Donahue was arrested again in February, this time after a wrong-way crash in the Lincoln Tunnel. On Wednesday, he pleaded guilty to that DWI charge in Weehawken, New Jersey.

Donahue practiced with the Jets on Wednesday and Thursday. He now awaits discipline from the NFL, which likely will result in a suspension.

"I can't say it hasn't [weighed on my mind]," he said Thursday after practice. "It was a pretty big deal. It's something I'm not proud of, obviously."

Donahue voluntarily entered a treatment facility in Jacksonville, Florida, after the second arrest. He said he hasn't had "a drop of alcohol" since then. At the time, the organization said it supported his decision to seek treatment and promised a "full support system" when he returned.

Weeks ago, Donahue's Montana-based attorney filed two motions to suppress evidence, but Donahue changed his plea to guilty. As part of the plea agreement, he must abstain from alcohol, drugs and mood-altering substances. He was permitted a restricted probationary license.

In New Jersey, his license was suspended for three months, and he must drive with an ignition device for a year.

In Montana, City Attorney Teague Westrope advised the court that Donahue had completed an inpatient rehab program, also noting that he had publicly accepted responsibility and apologized for his behavior.