Keenum gets nod over Thad Lewis 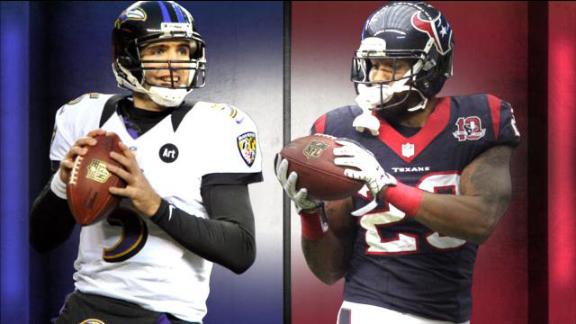 Recently signed quarterback Case Keenum is expected to start for the Houston Texans against the visiting Baltimore Ravens on Sunday, according to a league source.

The main reason the coaches are leaning toward starting Keenum is that he has a better knowledge of the offense than quarterback Thad Lewis, who signed with the Texans three weeks ago.

Keenum, who signed a one-year deal that takes him through the end of the regular season, was signed off the St. Louis Rams' practice squad earlier this week.

Keenum spent the entire offseason, training camp and preseason with the Texans. He beat out quarterbackT.J. Yates for the No. 3 job but was released after the team traded for Ryan Mallett.

The Texans have lost two quarterbacks due to injury -- Mallet to a torn pectoral muscle andRyan Fitzpatrickto abroken leg -- and rookie Tom Savage (knee) will not be available for this week's game.

Inside Edge: Ravens-Texans
ESPN NFL Insider Mike Sando delivers stats to help you make a pick for Baltimore at Houston.