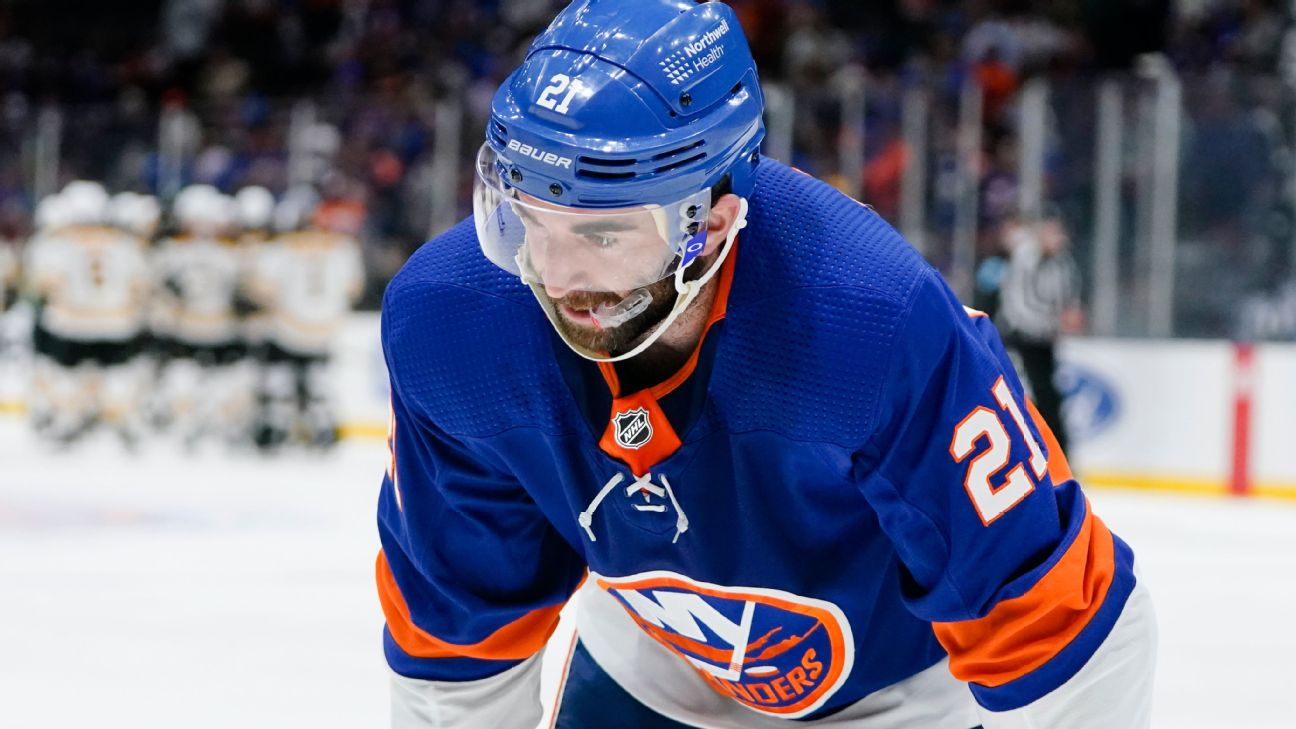 After being conspicuously quiet for most of the summer,Lou Lamoriello completed most of the New York Islanders' offseason work Wednesday by signing trade-deadline acquisition Kyle Palmieri and three other players to multiyear contracts.

Palmieri, a veteran forward who came over from the New Jersey Devils and had a solid postseason after struggling in the regular season, agreed to a four-year, $20 million deal. Palmieri was part of a package that cost the Islanders a first-round draft pick this summer, so keeping him in New York was a priority.


The other three signings are players who started last season with the Islanders, and their agreements help reinforce the core that made it to the semifinals of the Stanley Cup playoffs last season.

"It's exciting what we're doing right now," Cizikas said. "We're gearing up for another big year."

Palmieri, 30, posted nine points in 19 playoff games, and knew right away he'd like to stay. It didn't hurt that Lamoriello knew Palmieri well from their time together with New Jersey, when Lamoriello ran the Devils.

"Obviously it was a place I wanted to be, and I think the belief was that that was mutual," Palmieri said. "I had a good feeling it was going to work itself out."

The Islanders' only other signing of the summer was defenseman Adam Pelech on an eight-year, $46 million dealin early August. Lamoriello traded defenseman Nick Leddy to Detroit in a salary dump, forward Jordan Eberle went to Seattle in the expansion draft and yet the rest of the team is still together for another pursuit of the Stanley Cup.


"We have a lot of unfinished business," said Cizikas, who wants to play his entire career with the Islanders. "The way that the season ended wasn't ideal, but we know we have more. We know we can go further, and ultimately we want to do this with the same group."

As positive as the vibes are, until this group reaches the Stanley Cup Finals, the team's offensive firepower remains a question mark. New York has stability in net and defensive balance, but is there enough up front to win in the third round and beyond? In Game 7 of the semifinals last season vs. the Tampa Bay Lightning, the Islanders were shut out, 1-0.

Free-agent forward Zach Parise, 37, might help that push. Later Wednesday, according to The Athletic, Parise, bought out by the Minnesota Wild earlier this summer, said that he had reached an agreement with the Islanders earlier in the free-agency signing period, and that he'd be in New York in time for training camp. Perhaps Lamoriello will make that official this week, as well. Parise has several ties to the organization, as his father, J.P. Parise, also played for the Islanders, and Lamoriello drafted Zach Parise while with New Jersey.

Wednesday's moves put New York over the $81.5 million salary cap, though the club can go $6 million over by using long-term injury relief for Johnny Boychuk's salary, since Boychuk has since declared his playing days over. So, there is potential maneuvering available for additional roster changes, perhaps even into the regular season.

Cizikas and Beauvillier praised Lamoriello, the reigning general manager of the year, for doing his best to bring the core back for another run. There may not be room for Travis Zajac, who came over from the Devils with Palmieri at the deadline, but don't count anything out with veteran training camp still three weeks from opening.

Sorokin, 26, should have many years ahead on Long Island after putting up a 2.17 goals-against average and .918 save percentage in his rookie season. The Russian netminder will count for $4 million against the cap through the 2023-24 season.


Like Sorokin, Beauvillier, 24, was a restricted free agent who wasn't going anywhere. The 2018 first-round pick has 155 points in 333 NHL regular-season games, all with the Islanders.

"There's nowhere else I'd rather play," he said. "I knew it was going to get done."

Cizikas, 30, has already played 10 seasons with the Islanders, and didn't even consider signing elsewhere despite being an unrestricted free agent.

"There was no doubt," he said. "Long Island's my home and it'll always be my home."