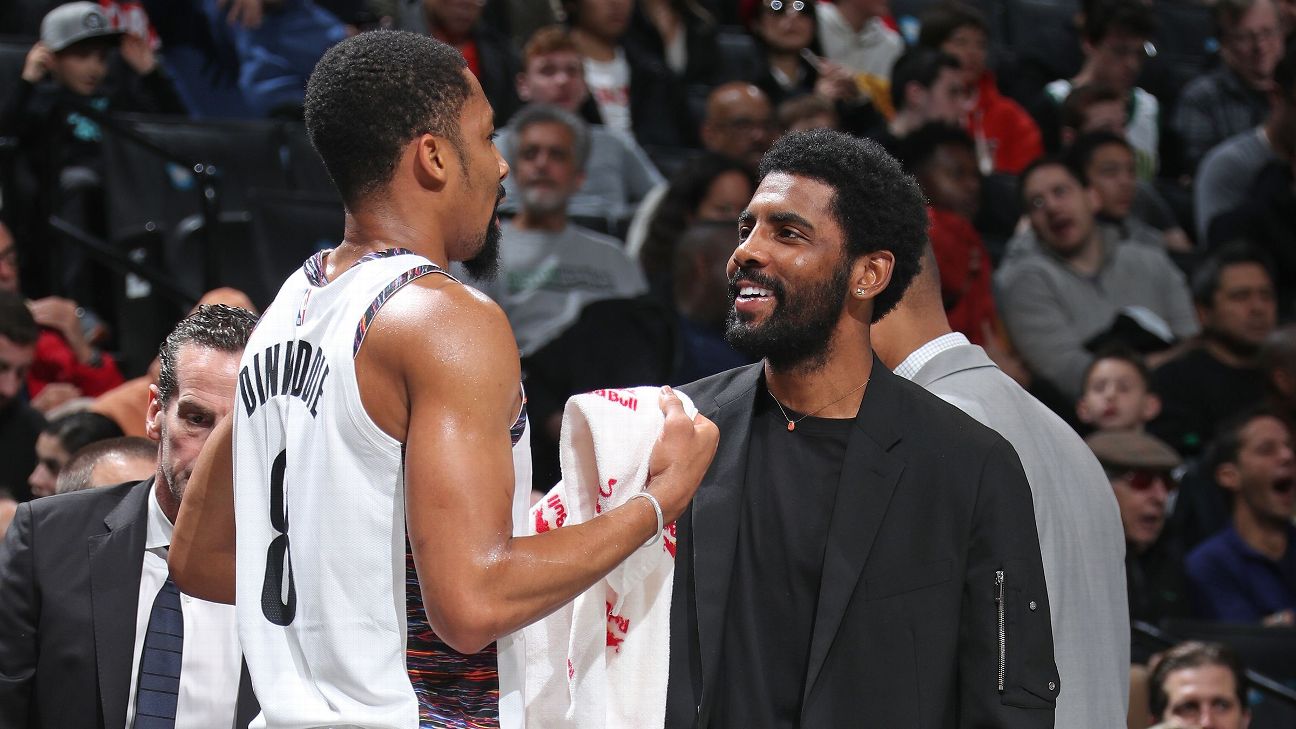 NEW YORK -- Kenny Atkinson climbed the stairs of the rostrum in the Barclays Center press room, stepped in front of a black and white backdrop and behind the podium to face five rows of reporters. It was only a matter of time before the question came.

What is the update on Kyrie Irving?

It was Sunday, one hour and 45 minutes before opening tip between the Brooklyn Nets and Philadelphia 76ers, and by this point in the season, the Nets head coach was on autopilot when it came to responses about his All-Star point guard.

"No update, no timetable," Atkinson said.

It marked the 15th consecutive game missed for Irving, who continues to be hindered by a right shoulder impingement injury suffered in mid-November.That number will grow to at least 17 games, as Irving did not accompany the team on its road trip to New Orleans and San Antonio this week.

The stretch is tied for the second-longest absence in Irving's career (the longest string of games came in 2015, when he missed 24 games with the Cleveland Cavaliers after having left knee surgery).

When Irving elected to team up with Kevin Durant and sign with Brooklyn, it sent shockwaves throughout the NBA. Now, the All-Star guard's unclear injury status is raising questions about when he might return to the court.

What has made Irving's injury absence so perplexing? How have the Nets stayed afloat without him? What will become of the red-hotSpencer Dinwiddie when Irving returns?

Let's answer some of the biggest questions around Irving, Dinwiddie and the Nets as Brooklyn eyes a third straight win Thursday night.

OK, so when did everything start for Kyrie?

The first mention of right shoulder discomfort was on Nov. 13, one day after Irving played nearly 37 minutes in the Nets' road loss to the Utah Jazz, dropping a team-high 27 points on 10-of-30 shooting (2-of-12 from the 3-point line).

The next day, Irving was listed as questionable with right shoulder impingement for Brooklyn's road game that night against theDenver Nuggets. Irving would end up playing 35 minutes and scoring 17 points (8-of-20, 1-of-5 from deep). He spoke postgame about the discomfort in his right shoulder and has not done a press conference since.

Let's back up. What exactly is shoulder impingement?

Shoulder impingement refers to any pinching in the shoulder when the arm is elevated away from the body. Difficulty with overhead movements (i.e., shooting a basketball) is a common complication that comes with this injury.

"There is a very small space at the top of the shoulder where several structures intersect," ESPN injury analyst Stephania Bell said. "If there is inflammation or tissue damage to any of the structures in the area ... the pinching, or impingement, that results when the arm goes through elevation can cause pain.

"For a basketball player who has this in his dominant arm, the most obvious limitation would occur anytime he elevates his arm to shoot the ball, but it can be equally problematic when trying to play defense or anytime there is even incidental direct contact."

According to Bell, there are likely several matters that need to be addressed by the Nets before Irving could make a return to the court: eliminating inflammation, restoring normal, pain-free motion and making sure the muscles are stabilized.

"These things can be addressed simultaneously," Bell said. "The trick is to balance the strengthening and returning to activity with proper loading to not trigger a renewed inflammatory response.

"While this may sound easy, there is no simple formula."

Early in Irving's absence, Atkinson said that he met with Brooklyn's training staff in order to better understand the intricacies of this type of injury. In the first week after Irving was initially diagnosed, Atkinson said his "hope is that it's a short-term thing."

"I will say this -- just from my personal opinion, shoulders are tough," Atkinson said on Nov. 18. "Those aren't easy to deal with. Listen, I know he's working diligently to get back on the court. I know he wants to be out on the court bad."

How close has Kyrie gotten to a return? Any setbacks?

On Dec. 8, it seemed Irving was about to turn a corner. After being unable to do any on-court work for weeks, Irving was finally able to complete shooting drills.

At that point, Atkinson said the plan for Irving was to "ramp up individual on-court work" in the coming days and then start "to integrate him in the next week or two into team practices."

But one week later, while the on-court work had increased, Irving had yet to do any of the important "contact work" stressed by Atkinson. Since the injury, Irving has not participated in any team practices.

Atkinson has been adamant that this shouldn't be considered a setback for Irving, adding the recovery process is just slow and murky. Atkinson said Irving and the training staff have to manage Irving's pain and ensure he doesn't have any range-of-motion issues. But because of the nature of the injury, Irving's level of discomfort can change from day to day.

"I think the timeline for his recovery is somewhat up to him," Nets GM Sean Marks told Yahoo Sports last week, "but also up to his body and how that progresses. It could happen quickly or it could take some time.

For the most part, Nets brass has been notoriously tight-lipped about Irving's injury status.

"I've had my moments of frustration because I want him back so bad," Atkinson said in early December. "You hear our performance staff and then you talk to Kyrie... and then you get your mind to a place, like, 'OK, this is the smartest thing to do.'"

Not only has Irving missed well over a dozen games, but he did not even travel to a highly anticipated matchup against the Celtics, his former team, on Nov. 27. Sitting that game out, even though he was injured, opened the all All-Star point guard to intense scrutiny.

With Kyrie on the mend, how have the Nets been winning?

Brooklyn is 11-5 since Irving went down -- the Nets started the season 4-7 -- and the team has stayed alive in a suddenly deep group of East contenders.

Dinwiddie has been the prime benefactor of increased playing time. In fact, he's been a revelation for Brooklyn in Irving's absence, putting up numbers worthy of All-Star consideration in the Eastern Conference: 24.3 points, 7.4 assists and 3.1 rebounds over his past 16 games.

And since moving into the starting lineup on Nov. 16, Dinwiddie's clutch-time numbers (when the score is within five points in the final five minutes of regulation or in overtime) have been eye-opening. Per NBA.com/stats, only Houston Rockets guard James Harden has scored more clutch-time points per game than Dinwiddie's 4.8 since he's been thrust into the starting lineup.

"Right now Spencer is our best player on the court," Nets shooting guard Joe Harris said. "We live and die with him making plays down the stretch."

The Nets are also without young guard Caris LeVert, who underwent surgery on his right thumb on Nov. 14 and is expected to miss six weeks. When they were healthy, both Irving and LeVert were starting alongside Harris, Taurean Prince and Jarrett Allen, with Dinwiddie in a sixth man role.

In the absence of both LeVert and Irving, Garrett Temple has also been inserted into Brooklyn's starting lineup and is at or near career-highs across the board in his 10th season.

Temple was signed largely to be a veteran presence for Brooklyn. In the offseason, Brooklyn lost Ed Davis, DeMarre Carroll and Jared Dudley to free agency. The Nets' injuries have forced Temple to bounce around from role to role.

"That's what they pay me for," Temple said. "Part of the reason I was here was to be a mentor as well as produce on the court. I've been in so many different roles in my entire career.

"Fifteenth guy, to not dressing, to starter playing 40 minutes a game."

So they are better without Kyrie? Got it.

Yes, Irving had a history of locker room friction in Boston and Cleveland, but he is still one of the most talented superstar guards in the league. The Nets have adamantly disputed any reports that Irving has been anything but a positive force in Brooklyn's locker room.

And before he went down, Kyrie was a clutch-time monster.

Pre-injury, Irving led the NBA with 51 clutch-time points, per NBA.com/stats, and he still sits at No. 7 in the league despite missing 16 games (that number is aided by the fact that nine of Irving's 11 games this season were within five points in the final five minutes or overtime).

During each of his two years in Boston, Irving ranked fourth in clutch-time points per game among players with at least 30 qualifying games.

That is all a fancy way of saying: Throughout his career, when the games have been tight late, Kyrie will get you buckets.

The biggest difference seen during Irving's absence has been Brooklyn's ball movement. With Irving watching from the bench, the ball just isn't sticking as much.

Dinwiddie's been great, but what happens to him when Irving returns?

Dinwiddie's play absolutely presents Atkinson with a lineup Rubik's cube to solve when Irving finally does make it back to game action.

Atkinson has repeatedly punted questions about how he plans to structure the starting lineup when Irving is back. "We will cross that bridge when we get there," Atkinson said.

Early on in the season when a healthy Irving was starting, Dinwiddie would come off the bench. Dinwiddie, a former second-round pick who had a long road to Brooklyn that included a G-League stint, said he will accept any role he's asked to take on -- even if that includes going back to a reserve role.

"You just take what's given," Dinwiddie said. "You just try to roll and get as many wins as possible without [Irving] and just understand we will be that much better as a team when he does return."

Atkinson hasn't ruled out the possibility of Dinwiddie sticking in the starting five while Irving gets back up to game speed. It's been a small sample size, but pairing Irving and Dinwiddie in the same backcourt has worked well for Brooklyn's offense this season.

According to ESPN Stats & Information research, when Irving and Dinwiddie have shared the court -- 138 minutes -- the Nets boast a 118.9 offensive rating; that is the 14th-best offensive duo in the league with at least 130 minutes on the court together.

It is likely, though, that Dinwiddie returns to being Brooklyn's sixth man when Irving returns. For Atkinson, it might be a good problem to have -- a proven scorer and ball handler running the second unit as the Nets jockey for playoff positioning.

"You learn how to adapt and be flexible," Atkinson said. "The players are amazing. They are more resilient than the coaches. We will complain, 'This guy is in, this guy is out.' The players look at it as an opportunity.

"They love their teammate, and they know we'd be a better team with him there, but it's also like, 'Man, this is my chance to step up.'" 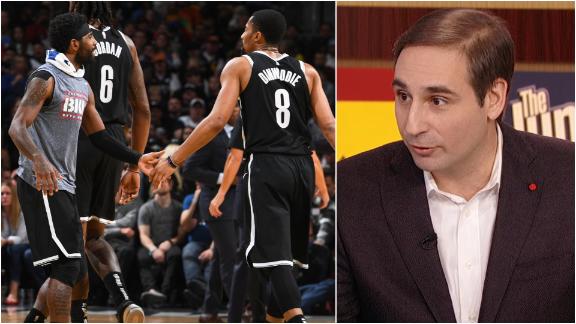 Lowe: Dinwiddie should come off the bench when Kyrie returns
Zach Lowe and Paul Pierce discuss how the Nets manage playing time between Kyrie Irving and Spencer Dinwiddie. 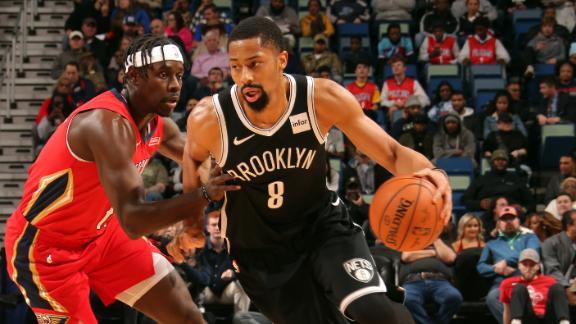