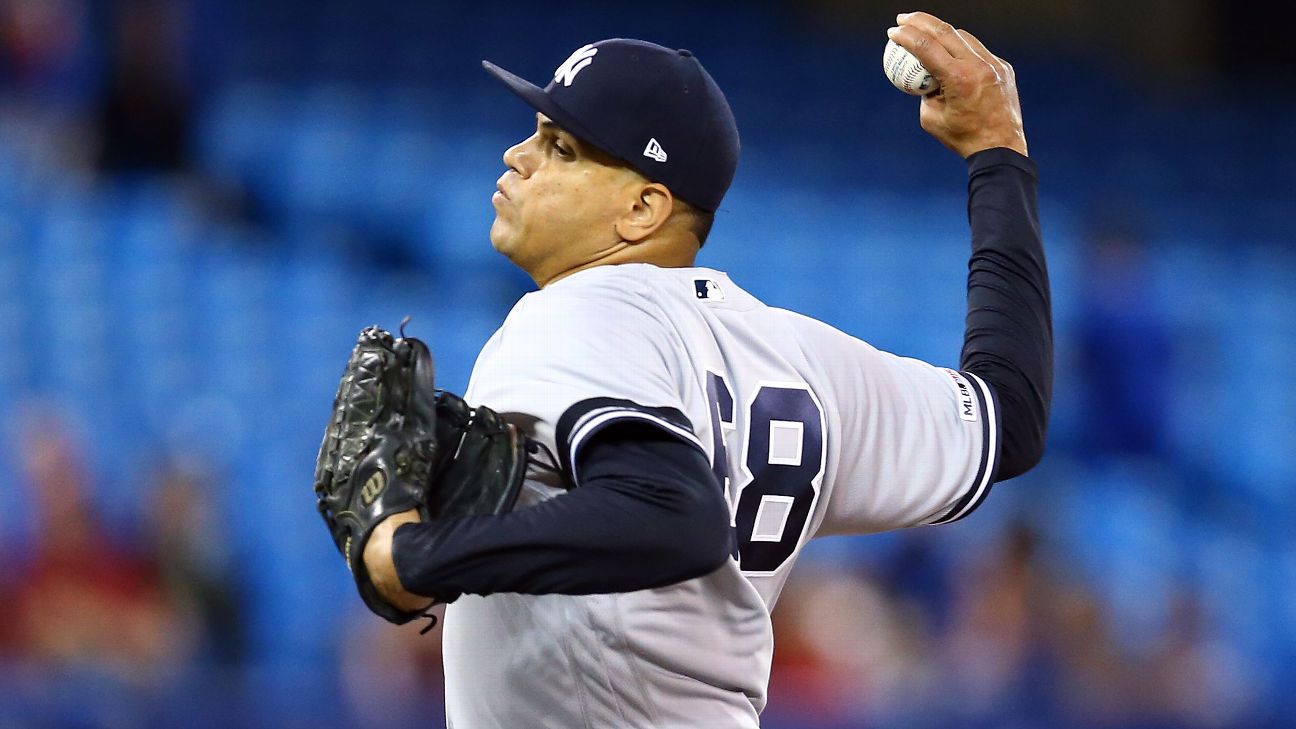 NEW YORK -- This is the next stop on Dellin Betances' subway ride around New York.

After spending his first eight seasons in the majors with the crosstown Yankees, the New Yorker joined the Mets on a one-year contract with a player option for 2021. The deal was announced on Christmas Eve and guarantees the towering right-handed reliever at least $10.5 million.

"This past week-and-a-half has brought a lot of excitement to myself and my family," Betances said during his introductory news conference Thursday at Citi Field, where he was joined by more than two dozen family members. "Christmas, in fact, came a little bit early as we celebrated our signing with the New York Mets."

Betances' journey has taken him through all five of New York City's boroughs. Born in Manhattan's Washington Heights neighborhood, the four-time All-Star grew up on the island's Lower East Side.

The Yankees drafted Betances out of Brooklyn's Grand Street Campus High School in 2006. A year later he suited up for Low A Staten Island, eventually making his big league debut at Yankee Stadium in 2011

"I feel like we've been spoiled throughout our career," the 31-year-old Betances said about playing in the city in which he grew up. "I was definitely excited to stay home. I think the rest of my family were excited, so I think it worked out perfect."

This Big Apple baseball tour culminates with his new team in Queens, where Betances will be counted on to play a key role on a club managed by a former teammate and close friend.

"He's probably one of the players that I would say is just hungry for baseball," Betances said of rookie manager Carlos Beltran. "Obviously, him being the manager here definitely helped out. I know how much a lot of the players are going to be excited to play for a guy like that, a future Hall of Famer."

Beltran influenced Betances' decision to sign with the Mets, as did several others in the organization, including veteran second baseman Robinson Cano, who had multiple FaceTime video calls with the reliever.

"I think Carlos had a relationship with Dellin and the fact that both were here in New York presented opportunities for them to be in communication," said Mets general manager Brodie Van Wagenen, noting that several teams were interested in Betances. "Cano, he got involved closer to the end, and Carlos again had a conversation late in the process. But Carlos more regularly and then Robbie more actively."

Listed at 6-foot-8 and 265 pounds, Betances strikes an imposing presence on the mound. He can throw in the high-90s, his fastball coupled with an effective knuckle curve. He appeared in 358 regular-season games with the Yankees, posting a 2.36 ERA.

"He's got size, he's got strength and he's got swagger when he takes the mound," Van Wagenen said of his club's newest acquisition. "His power stuff can overmatch and overpower, and ultimately he can intimidate his opposing hitters."

Opponents have hit just .170 against Betances during his career, the third-lowest mark among active players with at least 300 innings pitched.

Betances was the first reliever in baseball history to strike out 100 or more in five consecutive seasons (2014-2018), striking out 40% of batters he faced during that span.

He was sidelined since spring training with a strained lat before making his 2019 debut in mid-September, an outing that lasted just eight pitches. Betances tore his Achilles tendon during that appearance and has not pitched since.

"His health is something that we got comfortable with throughout the process. He did his rehab here in New York," Van Wagenen said. "From our standpoint we expect him to be fully on track for the start of spring training."

Betances has been long tossing and plans to throw off of a mound in about a week.

"Normal offseason as far as throwing-wise and preparation," he said. "The only thing is that I have to work a lot harder now to try to gain some of that strength that you lose when you have to wear a boot for six weeks."

A weak spot last year, the Mets' bullpen has plenty of potential heading into 2020. The 4.95 ERA ranked 12th in the National League, and the bullpen converted a paltry 38 saves in 65 opportunities.

The biggest disappointment was former All-Star Edwin Diaz, whose ERA ballooned from 1.96 in 2018 to 5.59 in his first year with New York. The embattled closer has been working with new pitching coach Jeremy Hefner, and the GM is encouraged.

"First and foremost, he's healthy. Secondly, even in his difficult time last year he still struck out 99 batters over the course of the year," Van Wagenen said of Diaz. "Then we know the work that he's putting into his training -- from a nutrition standpoint, strength and conditioning as well as nuts and bolts mechanics."

If Betances is truly healthy and Diaz can return to his previous form, Van Wagenen's optimism may be warranted.

"I've talked many times this offseason and in the past that our goal is to increase the floor of our projected win total. This signing's different," he said about adding Betances. "This signing was intended to blow the cover off of our ceiling. We believe that a healthy and dominant Dellin combined with Edwin Diaz and Seth Lugo and Justin Wilson, Jeurys Familia, Brad Brach, Robert Gsellman. This collective group has the potential to be one of the best bullpens in baseball."

A lot has to go right for that to happen. For now, however, at least the pieces are in place.
Report a correction or typo
Related topics:
sportsespnnewsnew york metsdellin betances
Copyright © 2021 ESPN Internet Ventures. All rights reserved.
More Videos
From CNN Newsource affiliates
TOP STORIES