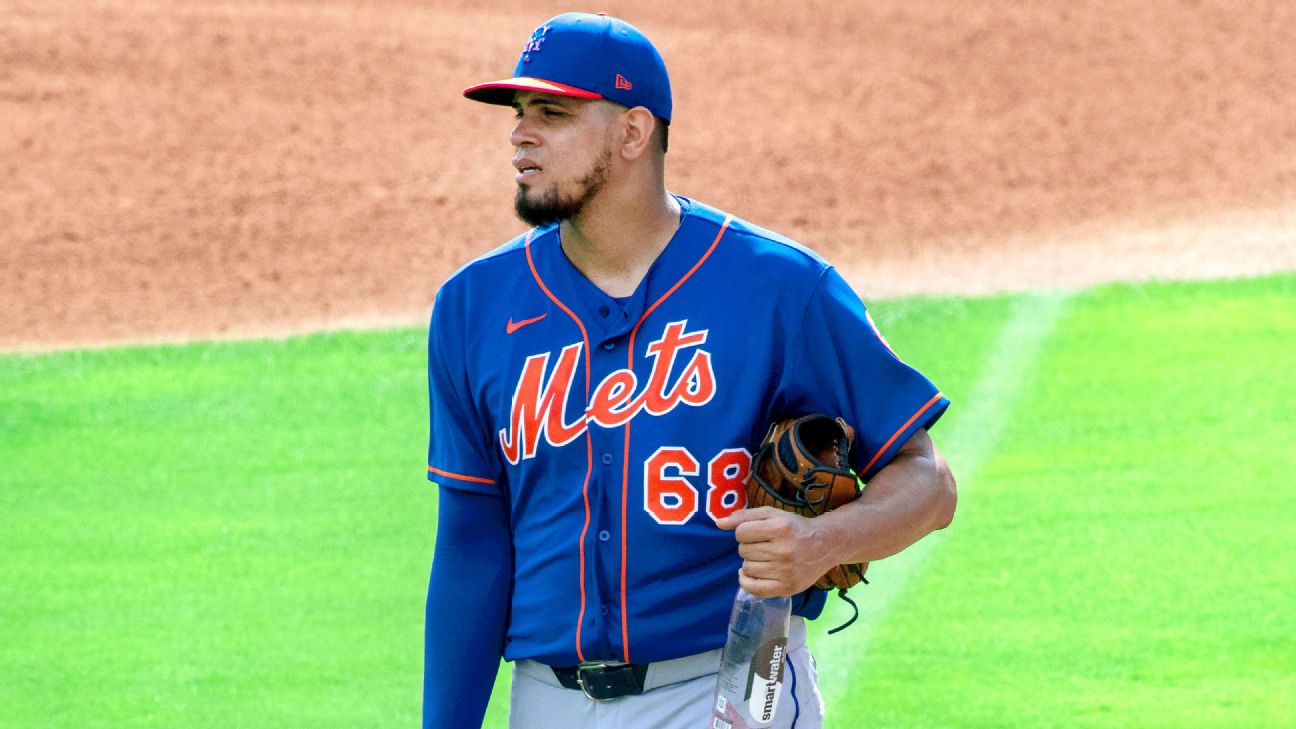 If there was one point in time when New York's own Dellin Betances made it clear that he was in Major League Baseball to stay, it was on May 15, 2014 at Citi Field. As a 26-year-old reliever for the New York Yankees, Betances baffled New York Mets hitters Daniel Murphy, David Wright, Curtis Granderson, Chris Young, Lucas Duda and Ruben Tejada, striking out all six of them in a row to finish 2 perfect innings in a 1-0 Yankees win.

Betances' long road to the big leagues in the Bronx had taken him through Washington Heights, where he grew up; the Lower East Side, where he was raised; and Brooklyn, where he learned how to play baseball. And now that path is leading to Queens, still in the majors, but now with the Mets.

It wasn't until the spring of 2014 that Betances showed the consistency necessary to secure a spot in the Yankees' bullpen on the Opening Day roster. That in itself was a breakthrough -- once a highly touted pitching prospect, Betances' stock declined between his debut in 2011 and 2013, folding in a shoulder injury around pedestrian pitching. But that wasn't his only breakthrough in 2014, as Betances joined teammate Masahiro Tanaka to become the first pair of rookie pitchers to earn spots on the All-Star team for the Yankees since 1947.

Betances led all major league relievers in strikeouts (135 in 90 innings) that season, breaking Mariano Rivera's franchise record for strikeouts by a reliever (130 in 1996). He finished second in Rookie of the Year voting, losing to Cuban phenom Jose Abreuof the White Sox.

That was then. Now Betances hopes to create new memories on the mound at Citi Field, having shed his pinstripes to join the list of former Yankees who crossed town to play for the Mets. Many of the friends that he grew up playing baseball with at Grand Street Campus High School in Brooklyn are delighted to know that he is no longer a member of the "Evil Empire."

"I played a lot of ball in Brooklyn and there were a lot of Mets fans, and a lot of them are definitely excited to see me cross over to the other side," Betances said. "I grew up in Washington Heights, so Yankee Stadium was a lot closer and I went to a bunch of games there. But I was always the odd kid, as the Yankee fan.

"[Now] for me it's about building a new fan base. Obviously, I spent a lot of time with the Yankees and I was able to get the respect from fans there. Now it's kind of like starting a new chapter in my career and I am definitely excited."

Betances got his first taste of the business side of baseball after a bitter arbitration process with the Yankees in 2017, when a panel of arbitrators determined his salary would be $3 million, not the $5 million he and his agent, Jim Murray, had sought. After winning the arbitration case, Yankees team president Randy Levine made unfavorable comments against Betances and his agent, which did not sit well with the reliever.

Nonetheless, Betances says there is no ill will toward the Yankees organization, where he spent more than a decade of his professional career, now that it's in his rear-view mirror.

"I hold no grudge. I am over it. I feel like that happened a long time ago," he said. "I was bitter at that point in my career and it taught me a lesson that this is a business. You open your eyes a little more. But I am long over it. I am very thankful to the Yankees and my many years there, I have many friends there, and especially for the fans who supported me throughout my career."

In 2019, only one year before he reached free agency, injury problems kept Betances away from the mound almost the entire season. He suffered an impingement in his pitching shoulder during spring training and had a setback in his rehab after straining his right lat muscle. The day he came back to finally pitch in the big leagues at the end of the 2019 season, he suffered a partially torn left Achilles tendon celebrating a strikeout, after throwing only eight pitches.

Following the season, the Yankees made little effort to secure Betances' services in free agency, which prompted the right-hander to accept an offer from the Mets. Betances signed a one-year contract worth $10.5 million with incentives that includes a player option in 2021 and a vesting player option for 2022.

"This offseason I had some big decisions to make," he said. "My family has always supported me, regardless of what I do, but they're excited I'm staying home. The Mets organization has welcomed me very well. My family is very excited for this new chapter in my career."

Reporting to a different spring training location, moving from Florida's west coast (Tampa) to the east (Port St. Lucie), has not been the only major change for Betances, who was also able to put away his razor for the first time in his career. The Yankees have a long-standing policy that does not allow players to sport long hair or beards.

"It was kind of weird coming to spring training and not having to shave," Betances said. "Obviously, Yankee tradition is always clean-shaven. You respect that. And for me it was not difficult because earlier in my career my beard didn't grow much. I am definitely excited to keep [the beard] even though I can't grow it too long because then my wife will get mad and she would want to shave it off."

Betances has felt welcome in Port St. Lucie with many familiar faces in the Mets' clubhouse, including former Yankees Nick Rumbelow, Justin Wilson and Chasen Shreve.

"It's exciting to see some of the same faces you played with. I did not know Rumbelow was here, so it's good to see him here. And now Chasen has long hair!" Betances said. "I am close with Chase Shreve. We spoke a lot in the offseason. And also seeing some of the guys that I played against, like [Rick] Porcello. With the Subway Series, I played against a lot of these guys, so I am very familiar with them, and seeing their faces again and getting to know them is pretty cool.

"I know [Jeurys] Familia well, and I got a chance to play against [Edwin] Diaz when he was with Seattle. I've had conversations with him the last couple of years. Getting to pair up with him is going to be exciting. We have a lot of electric arms in our bullpen and if we do our job we can win a lot of games."

While with the Yankees, Betances was a key contributor in one of the elite relief corps in the big leagues. The Mets' bullpen was less than stellar last year, despite the addition of Diaz, which was a big factor in the team missing the playoffs. Teaming up with Familia and Diaz, Betances hopes to bring some stability to the Mets' late-game performance.

"The Yankees obviously are full of weapons. They've been very successful for a lot of years. For us, we have to focus on being the best version of ourselves," Betances said. "Last year, I wasn't healthy. So that is key for me. A lot of these guys want to have a bounce-back year. And we have the potential to be one of the top bullpens in the league.

"We've got to have a clean slate," he added. "This group did some really nice things toward the end of the year, and they can take that confidence into this year. We have the players to get to the playoffs, which is always the goal. Now we have to perform in order to put ourselves in the best spot. I am definitely going to preach playoffs all the time while I am here."
Report a correction or typo
Related topics:
sportsespnmlbdailynew york metsdellin betances
Copyright © 2021 ESPN Internet Ventures. All rights reserved.
More Videos
From CNN Newsource affiliates
TOP STORIES