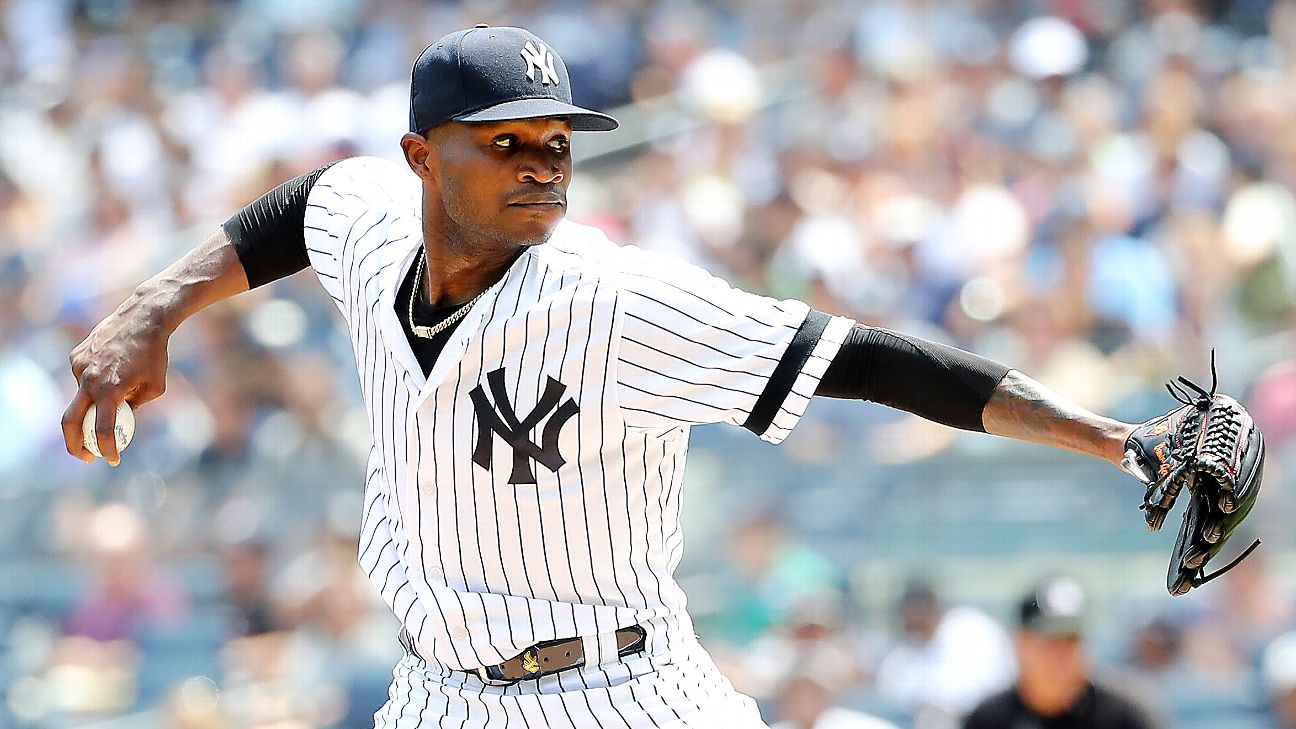 TAMPA, Fla. -- New York Yankees manager Aaron Boone said he had a conversation with Domingo German about his cryptic Instagram post on the day he returned to the team following a domestic violence suspension.

"Everything is over," German wrote in Spanish on Wednesday.


German deleted his posts, then wrote: "I'm ready" in Spanish.

"Certainly, we're paying attention to that stuff," Boone said Thursday. "When I first heard about it last night and saw it and it was brought to my attention, I was taken aback a little bit and immediately concerned, but do feel like maybe a little bit out of context, a little bit overblown.

"And I am comfortable that he's doing fine and doing well and ready to compete. But it is something that we'll continue to watch and as best we can try and make sure that he's in a good place. But I had the conversation about trying to be as smart and choosy as we can being about some of the things we're expressing publicly."

German was 18-4 with a 4.03 ERA in 2019 when he was put on administrative leave that Sept. 19 while Major League Baseball investigated an alleged domestic violence incident involving his girlfriend, with whom he has at least one child. He missed the final nine games of the 2019 regular season and all nine of New York's postseason games.

Yankees reliever Zack Britton would not say whether German needed to speak with teammates about what happened.

"That's a tough question. I don't think he owes anything to me," Britton said. "I think it's off-the-field stuff that he needs to take care of. I think sometimes you don't get to control who your teammates are. I mean, that's the situation. I don't agree with what he did. I don't think it has any place in the game or off the field, at all. ... I think that's something that he's going to have to deal with on his own and make better choices going forward."
Report a correction or typo
Related topics:
sportsespnnewsmlbnew york yankeesdomingo german
Copyright © 2022 ESPN Internet Ventures. All rights reserved.
TOP STORIES
Official says police made 'wrong decision' during TX shooting
Massacre survivor says gunman told them: 'You're all gonna die'
Thunderstorms on the way; Bethpage Air Show cancels practice session
Accuweather Alert: Warmer and humid, strong storms later
Bank employees help kidnapped woman after she asks for loan
16-year-old arrested after social media threat to shoot up NY school
Explosion rocks neighborhood near Philadelphia, 4 confirmed dead
Show More
NYC offices could be half-filled by September, business group says
Jersey Shore, businesses prep for busy Memorial Day weekend
NYC beaches officially open to swimmers this Memorial Day weekend
Memorial Day weekend: More drivers despite high Tri-State gas prices
Judge dismisses Trump's lawsuit, allowing NY probe to go on
More TOP STORIES News