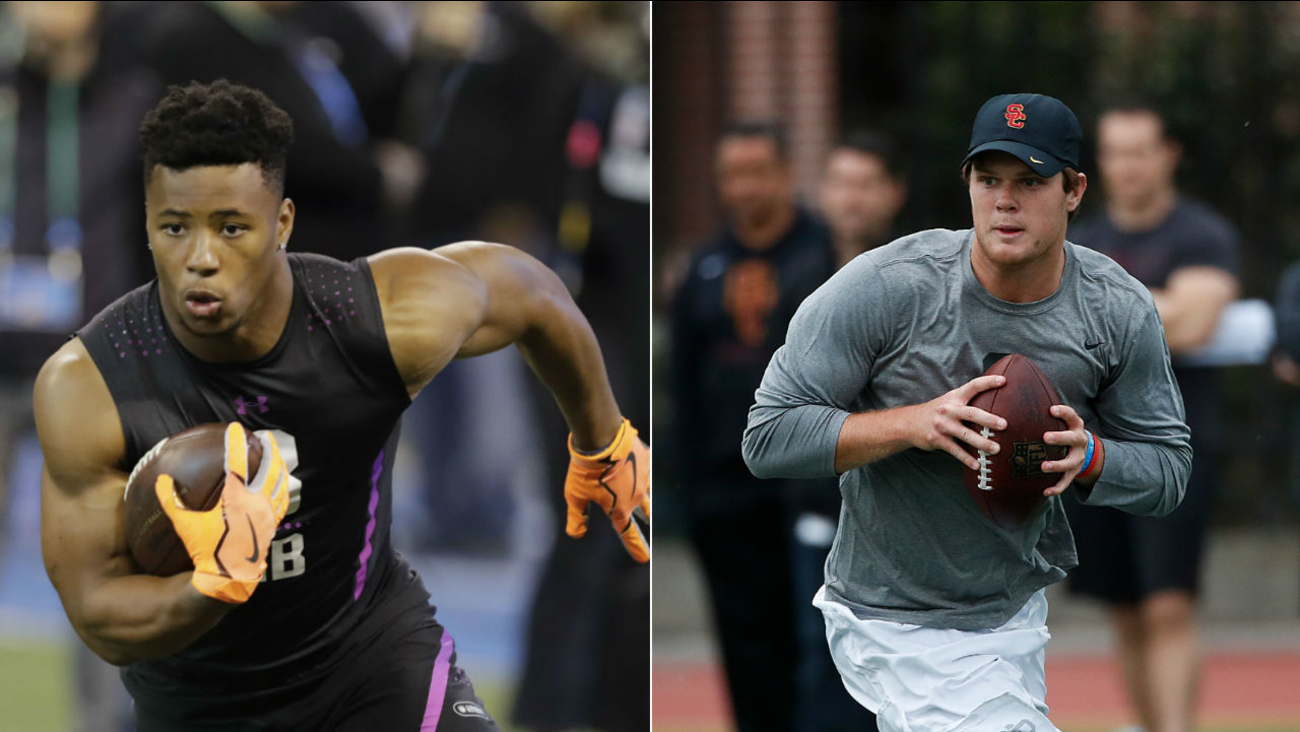 NEW YORK -- The New York Giants passed on an heir apparent to two-time Super Bowl MVP Eli Manning and took a running back that many think is the best to come out of college in decade.

The Giants selected Penn State's Saquon Barkley with the second pick overall, a player many football experts consider the best running back to enter the NFL since Adrian Peterson came out of Oklahoma in 2007.

Barkley, who entered the draft after his junior season, has all the ingredients to become a great. He has quickness, speed, strength, character and can pass protect. He also can catch and is a dynamic returner, although the Giants don't plan on using him as the top returner.

Giants general manager Dave Gettleman said he hasn't seen a player like Barkley in almost three decades. He has the speed and feet of the little guy with the power and strength of a big guy.

The Giants didn't take long to make their selection once the Cleveland Browns took Oklahoma quarterback Baker Mayfield at No. 1.

Gettleman quipped he would have made the pick sooner but the league mandates teams wait five minutes before picking.

"At the end of the day, a great player is a great player," said Gettleman, who called the pick easy. "He is a touchdown maker. He is a threat to take it to the house every time he gets his hands on the ball."

The Giants need help, coming off a 3-13 season that cost coach Ben McAdoo and general manager Jerry Reese their jobs.

Drafting Barkley gives new coach Pat Shurmur a player who can do it all, while showing the Giants believe the 37-year-old Manning has more in the tank.

"He is our quarterback, we believe in him," Gettleman said of Manning. "He threw the hell out of the ball for three days (minicamp). He has not lost one bit of arm strength."

Shurmur expects Barkley to be an every-down player, but first he has to learn the offense, which is more diverse than the one Penn State employed.

"If he is the best Saquon he can be, then he will find his way into the lineup and he will find a way to help lead this team," Shurmur said. "That's the challenge for him."

Gettleman expects Barkley to meet the challenge. He recalled watching video of a game earlier this season when he got to the second level and was confronted by two linebackers and a safety. He put together three moves and left them in the dust.

"I watched it and saw all the other stuff and just put the clicker down and went to the next guy," Gettleman said.

By the time Barkley spoke to reporters in New Jersey in a conference call, he had received welcoming texts from Manning and receiver Odell Beckham Jr., whom he had recently trained with in Los Angeles. He said he felt at home after his visit with the Giants.

In three seasons, Barkley finished as Penn State's second all-time leading rusher with 3,843 yards, including 1,271 this past season when he scored 138 points. He had 18 rushing touchdowns, pushing his career total to school-record 43. His 53 overall touchdowns also are a school record.

Coming out of the backfield, he had 54 receptions this past season. His 1,195 career yards receiving is a school record for a running back.

Barkley ended his career as the school's career all-purpose yards leader with 5,538 yards.

Orleans Darkwa led the Giants with 751 yards rushing in 2017, running behind a weak offense line.

By the way, the last time the Giants had the No. 2 overall pick was in 1981. The late George Young selected Lawrence Taylor.

The cool, calm and confident kid from Southern California is going from Hollywood to the Big Apple.

The New York Jets selected USC quarterback Sam Darnold with the No. 3 overall pick in the NFL draft Thursday night - and they didn't have to endure a horrific season to get him, after all.

Since the glory days of Joe Namath nearly 50 years ago, the Jets have been searching for a homegrown QB to deliver a similar type of sustained success as the face of the franchise.

New York is counting on the athletic and strong-armed Darnold to be their man.

"I'm taking it head on," Darnold said during a conference call. "I'm a pretty confident guy and I'm really comfortable in my own skin, so I'm going to go in there, do my thing and do what the coaches ask me to do - and do that at the highest level."

Many draft pundits projected several months ago that Darnold would be the No. 1 pick in this year's draft, and still tabbed him as the best overall quarterback of this year's class. But after Cleveland kicked off the draft by taking Oklahoma quarterback Baker Mayfield and the Giants selected Penn State running back Saquon Barkley, the Jets honed in on Darnold, who met with them and had a private workout late in the pre-draft process.

It seemed unlikely for the last several months that Darnold would end up with the Jets, especially after their 5-11 season didn't quite play into the "Suck For Sam" campaign pushed by some fans who preferred even more losses in the hopes that a year of misery would translate to a greater chance to land the star quarterback.

After striking out on luring Kirk Cousins in free agency, the Jets positioned themselves to be able to get one of the top available QBs in the draft by moving up three spots and acquiring the third selection from Indianapolis in a trade last month. It cost New York the No. 6 pick, two second-round selections this year and a second-rounder next year - a steep price to pay, but one general manager Mike Maccagnan was comfortable with.

And, in the end, landed the player many fans - and the Jets themselves - have been dreaming of leading their offense.

"We just sort of sat tight and had to see how it unfolded," Maccagnan said. "We felt very happy that Sam was there and we had a chance to pick him."

It was reminiscent of the 2015 draft when defensive end Leonard Williams, who some had ranked as the best overall player, fell to the Jets at No. 6. It happened again last year when safety Jamal Adams dropped to New York at sixth.

Darnold has been lauded for his leadership, poise and quick release, along with his ability to extend plays and get himself and the offense out of trouble. The Capistrano Beach, California, native played just two seasons at USC and went 20-4 as the starter, but showed enough potential to make scouts drool.

"I like his competitiveness," Jets coach Todd Bowles said. "Obviously, all the quarterbacks compete, but the biggest thing that you really don't see is he has an inner desire and drive that brings out the competitiveness in the other players."

The 6-foot-4, 225-pound Darnold redshirted his first year, and then was selected the Pac-12 offensive player of the year. He led USC to a victory over Penn State in the Rose Bowl, setting the game's record with five touchdown passes. Darnold also won the Archie Griffin Award, given to college football's most valuable player for the entire season - and was the first freshman to do so.

He was a Heisman Trophy favorite entering last season, but had a rocky start in which he matched the number of interceptions he threw his first season - nine - in just USC's first six games while working with several new faces in the Trojans' offense. But Darnold bounced back nicely, finishing with 4,143 yards passing with 26 touchdowns and 13 INTs and leading USC to an appearance in the Cotton Bowl - a 24-7 loss to Ohio State in which he struggled at times.

With the Jets, Darnold will get a chance to bring his "it" factor to a franchise and fanbase that will be immediately energized by his selection. He should also be able to adapt well to coordinator Jeremy Bates' West Coast-style offense.

He joins what is suddenly a crowded quarterbacks room with Josh McCown, Teddy Bridgewater, Bryce Petty and Christian Hackenberg also on the roster. But the addition of Darnold could spell the end of the road for both Petty - a fourth-rounder in 2015 - and Hackenberg - a second-rounder in 2016 - in New York.

So, Darnold could have a chance to give the veterans a run for the starting gig this summer.

"There's no timetable," Bowles said. "We're not going to throw him in there, but at the same time, we won't hold him back, either."

Darnold's selection marks the second time in franchise history that the Jets have picked third overall in the NFL draft. The last time came in 1981, when they took UCLA running back Freeman McNeil.

It's also the fifth time New York has taken a quarterback in the first round of the NFL draft, with Darnold following in the footsteps of Richard Todd (1976), Ken O'Brien (1983), Chad Pennington (2000) and Mark Sanchez (2009) - who also came from USC. All four had some measure of success during their stints with the Jets, but none was able to deliver them to the Super Bowl like Broadway Joe in 1969.

That will ultimately be the way Darnold's career in New York will be measured.
Report a correction or typo
Related topics:
sportsnfl draftfootballnew york jetsnew york giants
Copyright © 2021 by The Associated Press. All Rights Reserved.
More Videos
From CNN Newsource affiliates
TOP STORIES