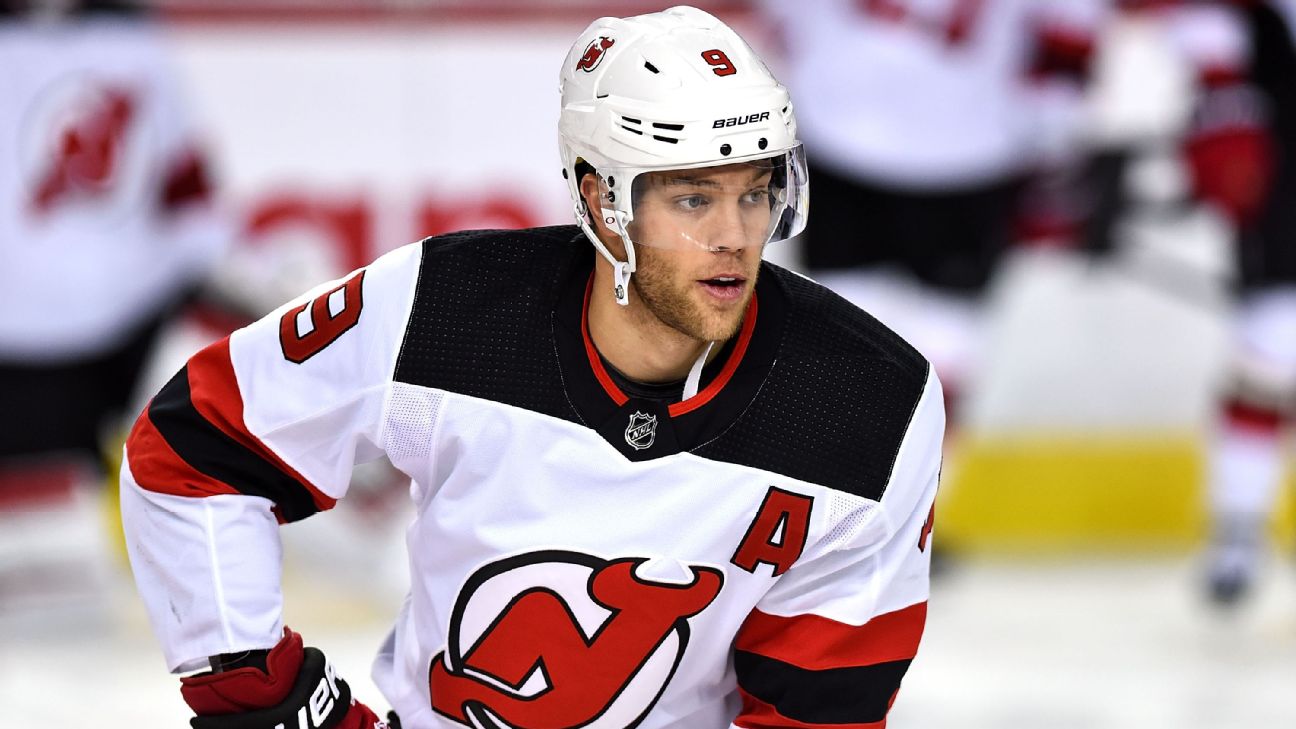 After weeks of trade rumors and a pair of healthy scratches in the New Jersey Devils' past two games, Taylor Hall has finally been traded, with the Arizona Coyotes now the employers of the 2018 Hart Trophy winner.

Where will the Yotes wind up in the standings? Where will Hall sign in free agency next summer? What's the path forward for the Devils? Our panel of experts weighs in:

Where will the Taylor Hall-enhanced Coyotes finish this season?

Greg Wyshynski, senior NHL writer: With due respect to the Coyotes, I think the question will be answered by three teams: the Vegas Golden Knights, who are 7-2-1 in their past 10 and starting to turn the corner, the Calgary Flames and the San Jose Sharks, who are both waiting to see if the Berube Effect kicks in with their interim coaches. In the end, I'll say Arizona is a playoff team, finishing third in the Pacific thanks to stellar goaltending. And hey, if the Coyotes miss the playoffs, no big deal: The first-round pick they sent to the Devils is top-three protected, and they'll have NHL Draft Lottery Voodoo Tiki Idol Taylor Hall under contract for the drawing.

Emily Kaplan, national NHL reporter: With 100 points and in the second Pacific Division playoff spot. The Coyotes already have the stud goaltending (and more importantly, goaltending depth) to finish strong. Hall will help galvanize Arizona's cluster of talented, young, 20-something forwards to be their best selves, and who knows? The only team that didn't finish with a 20-goal scorer last season might get two or three this season.

Chris Peters, hockey prospects analyst: This is looking more and more like a two-horse race in the Pacific, as I think the Coyotes will battle alongside the Vegas Golden Knights for that top spot. Arizona desperately needed some goal-scoring help, as it's currently 24th in the league, scoring 2.63 goals per game. Hall should not only boost the offense by scoring on his own, but his presence should also open things up for other Coyotes as the team starts becoming more difficult to match up against. Hall should also be able to help this team keep up with the speed demons in the West.

Dimitri Filipovic, hockey analytics writer: I still believe the Golden Knights are the best team in the Pacific, so I'll say second in the Pacific Division. There's a big opening in the division right now, which is why it makes sense that a team such as the Coyotes would view this as a good opportunity to go for it, but it's also so unpredictable that it was wise of them to put a top-three protection on their first-round pick this season. Hall is a logical fit in Arizona because he provides an immediate, much-needed shot in the arm for its anemic offense. He's a good bet to be up to the challenge, not only because he won't keep shooting 5.5% forever but also because he's jumping into a far more competitive environment and playing for his next big payday.

For which team will Taylor Hall be playing to begin the 2020-21 season?

Wyshynski: The Boston Bruins. This isn't as tidy a salary-cap situation as some other options, what with Torey Krug needing a new contract and the Bruins needing to make David Backes' cap hit disappear. But this is, to me, an ideal spot for Hall: an Original Six franchise with solid leadership and management, one that has at least another two or three seasons of serious Stanley Cup contention ahead of it and one with which he won't have to be the top left wing. The Bruins would finally solve their second-line conundrum and get the playerCam Neely wishes he could have drafted in 2010.

Kaplan: The Edmonton Oilers. There, I said it. Hall told me this preseason that the most important thing in the free-agency process is being on a team that can contend. Hey, who better to attach your wagon to than Connor McDavid (and Leon Draisaitl, too)? I think there's an element of unfinished business for Taylor, who was extremely bitter after being traded -- one-for-one -- in 2016. He can take agency here and rewrite his ending.

Peters: There are a lot of options, but the Colorado Avalanche might have the best recruiting pitch if they're willing to spend the money. They reportedly went big-game hunting for Artemi Panarin last summer and have a Stanley Cup window wide open, especially with Nathan MacKinnonon one of the league's best bargain deals for three more seasons. There will be other contracts that have to get done for some big-time players over the next few years, but if Hall craves deep postseason runs on the regular, Colorado looks like a good fit for him.

Filipovic:The Florida Panthers. There's clearly interest, considering they were reportedly one of the teams in the trade mix before bowing out of the running because the asking price was too rich for a rental. Mike Hoffman and Evgenii Dadonov are both coming off the books this summer, which clears up not only north of $9 million in cap space but also top-six wing spots on the depth chart. Plus, it wouldn't be the first time the Panthers opened the vault to lure a big-name free agent, despite all the red flags about how he'd age into his 30s.

Plan a course of action for the Devils to turn their fortunes around.

Wyshynski: The Devils should continue to be aggressive in shipping out veteran players, and that includes P.K. Subban, who is signed through 2022 and who you don't want going through the motions of a rebuild. (They'd have to retain much salary.) But there also needs to be a reckoning within the organization about who should make these moves. Ray Shero was hired as general manager in 2015. The Devils have one playoff appearance -- thanks to two months of MVP play by Taylor Hall -- and a 151-163-46 record otherwise. BesidesJack Hughes and Ty Smith, there isn't a "sure thing" in their pool of young talent, and there still isn't after the Hall trade (at least not yet, pending the conditional draft picks). Yes, there have been some hits for Shero: Landing Hall one-for-one for Adam Larsson is an all-timer, and the Subban move remains a shrewd use of cap space. But Year 5 for Shero could end up being the nadir of his tenure. General managers have left their jobs for less, whether they were escorted out the door or walked upstairs into a presidential role.

Kaplan: I'll say something Devils fans don't want to hear: They need to take another step backward before they can sustainably move forward. Don't pay up in free agency. Let the kids develop, especially as the team is stockpiling more prospects and picks. If Mackenzie Blackwood isn't ready as the starting goaltender, throwing money at another starter is going to be only a bandage fix. There isn't enough talent on defense (especially if unrestricted free agent Sami Vatanen leaves) or offense, frankly, to expect a playoff-caliber team next season.

Filipovic:It's a bitter pill for Devils fans to swallow because it marks the end of a promising but ultimately disappointing chapter. They were gift-wrapped not only the league MVP but also two first overall picks in a three-year window, and as of now, they have a single playoff win to show for it. That said, they aren't in terrible position to rebuild on the fly, assuming they can shrewdly maximize their next couple of moves. They already have Jack Hughes and Nico Hischier down the middle to build around, which is one of the toughest steps of any rebuild. They'll have two first-round picks next summer (with one likely in a premium spot), and they should be in position to add more assets between now and the trade deadline. The most important part is that aside from Subban, they don't have much future money tied up in depreciating assets, which means they've retained the flexibility to improve their team through trade or free agency should the opportunity present itself.
Report a correction or typo
Related topics:
sportsespntaylor hallnhltradesnew jersey devilsrumorsarizona coyotes
Copyright © 2022 ESPN Internet Ventures. All rights reserved.
TOP STORIES
Police fire shots after gunfire erupts at Queens intersection
Tree crashes down on backyard tent in New Jersey
Bicyclist struck and killed by MTA bus in Queens
Uvalde school police underwent active shooter training 2 months ago
Police shoot driver after vehicle strikes officer in Brooklyn
4 arrested during Memorial Day Weekend impaired driving crackdown
Flight cancellations kick off Memorial Day weekend
Show More
New York offers driver's licenses with "X" gender marker
Police: Suspect tells teen he is 'going to get rid of all you Jews'
Bethpage Air Show cancels remainder of Saturday lineup due to weather
AccuWeather: Less humid
NYC beaches officially open to swimmers this Memorial Day weekend
More TOP STORIES News