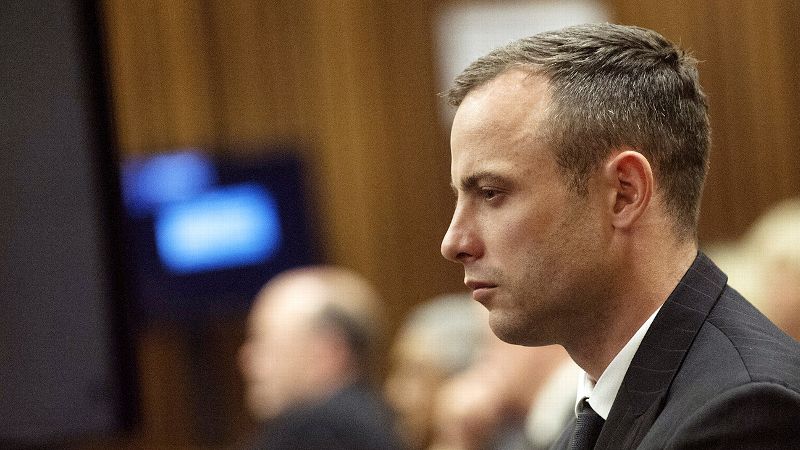 PRETORIA, South Africa -- Oscar Pistorius was ordered by a judge on Wednesday to undergo psychiatric tests, meaning that the double-amputee athlete's murder trial will be interrupted, possibly for two months.

The decision by Judge Thokozile Masipa followed a request for a psychiatric evaluation by the chief prosecutor, Gerrie Nel. The prosecutor had said he had no option but to ask for it after an expert witness for the defense testified that Pistorius had an anxiety disorder since childhood that may have influenced his judgment the night he fatally shot his girlfriend, Reeva Steenkamp.

Masipa said the court would reconvene Tuesday to decide on details regarding Pistorius' period of observation. The world-famous runner stood with his hands clasped in front of him in court as the judge explained her decision.

He could be acquitted if it's found that he was not criminally responsible for Steenkamp's shooting because of a mental illness. A mental disorder could also be used by his defense for a lighter sentence if he is convicted of murder. Legal analysts say the prosecution is in a strong position in the trial.

Pistorius will likely now be evaluated by a panel of psychiatrists for a period of 30 days at a government facility, although Masipa said it would be preferable that he be an outpatient and return home each day after tests. The parathlete is free on bail after being charged with premeditated murder for Steenkamp's shooting death last year.

In a statement read on behalf of his family, Pistorius' uncle, Arnold Pistorius, said the ruling reaffirmed their confidence in the South African justice system.

"As a family, we are comforted by the thoroughness and detail of this judgment and Judge Masipa's commitment, using every avenue, to ensure a fair trial," Arnold Pistorius said.

In sending Pistorius, 27, for evaluation by experts, Masipa said the court was "ill-equipped" to properly assess the diagnosis by psychiatrist Dr. Merryll Vorster. The judge said it was important to assess his state of mind because of questions raised by the prosecution that Pistorius might argue he was not criminally responsible for the shooting because of his anxiety disorder.

"The accused may not have raised the issue that he was not criminally responsible at the time of the incident in so many words, but evidence led on his behalf clearly raised the issue and cannot be ignored," the judge said.

Pistorius says he shot Steenkamp by mistake in the pre-dawn hours of Feb. 14, 2013, thinking there was an intruder in his home. His defense has regularly pointed to his fear of violent crime as central to his case of a mistaken killing. Vorster, the psychiatrist testifying in Pistorius' defense, said he had generalized anxiety disorder and was "hyper-vigilant" and constantly feared being attacked.

The prosecution says Pistorius killed Steenkamp intentionally after an argument, and Nel said he didn't believe an anxiety disorder played any role. He also said he had no option but to make the application on the basis of Vorster's diagnosis. In asking for the evaluation, Nel also may be pre-empting any appeal by Pistorius' defense, citing a psychiatric disorder, should he be convicted.

The chief prosecutor had previously referred to a period of 30 days for a psychiatric evaluation, the typical period for observation under South African law. Any panel of experts that assesses Pistorius would take additional time to compile a report and submit it to the court. Legal analysts say the psychiatrists' report could take another month, raising the possibility of a two-month delay in the trial, which started March 3 and is in its eighth week of proceedings.

Masipa noted that having Pistorius evaluated as an outpatient would be preferable as the referral was not meant to punish him. She acknowledged that there would be a significant delay.

"This is not about anyone's convenience, but rather about whether justice has been served," Masipa said, adding that she would provide details about her decision in court on Tuesday.

Marius du Toit, a defense lawyer not involved in the case but following it closely, said a panel of three psychiatrists would provide the court with a report on Pistorius, and it may also deal with whether he is fit to stand trial at all.