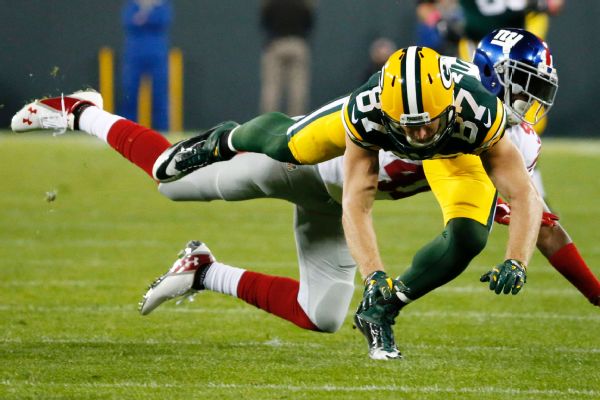 But they don't appear to be down with the law-enforcement-inspired nickname New York's defensive backs have adopted.

Packers receiver Davante Adams said Thursday he had not heard of the nickname. When told about it, he said, "Well we're in Wisconsin, so we don't have to worry about that."

Receiver Geronimo Allison heard the name for the first time on Thursday as well.

The Giants actually ranked just 23rd in passing defense, allowing 251 yards per game during the regular season, but they finished second in the NFL in scoring defense (17.8 points per game). They intercepted 17 passes, tied with the Packers and three other teams for second-most in the league.

Two members of the Giants secondary, Collins and cornerback Janoris Jenkins, were selected to the Pro Bowl.

"The fans actually came up with that [nickname]," Collins said told reporters who cover the Giants. "We were just trying to figure out what to call our group, and they came up with it. But we stuck to it. [Cornerbacks coach Tim Walton] really is the one that brings the name up all the time, and we just stuck with it. We just call ourselves NYPD."

The Giants gave Rodgers problems during their regular-season meeting at Lambeau Field in Week 5. The Packers won 23-16, but Rodgers completed a season-low 51.1 percent of his passes and threw two interceptions, one of only two times this season he threw multiple picks.

"They're healthier than they were at that time," Rodgers said of the Giants secondary. "Both [Eli] Apple and [Dominique] Rodgers-Cromartiewere injured that game. Those guys are playing well and they're healthy. Landon Collins is having a great season, making a lot of plays. At that point, he was making some plays, but then obviously he went on a run there and was a big part of their success."

Said Packers receiver Jordy Nelson: "They've got a great secondary, from the corners and the safeties. Not very often do teams have both -- usually it's one or the other, for the most part. ... It will be a good battle."