Rafael Nadal: I'm not a favorite 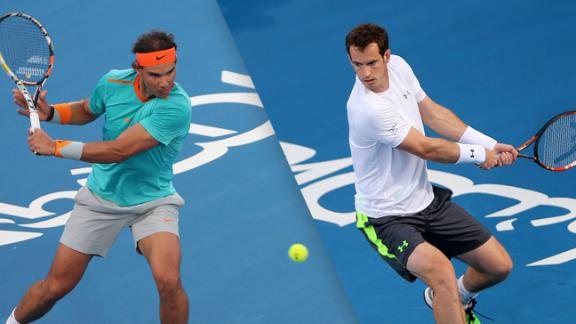 MELBOURNE, Australia -- Asked to predict who will win this year's Australian Open, Rafael Nadal takes a deep breath, shrugs his shoulders and insists it won't be him.

The 14-time Grand Slam winner is back on tennis' big stage after injuries and ailments sidelined him for several months. But rebuilding his confidence remains a work in progress.

"I don't consider myself one of the favorites here," the No. 3-ranked Spanish star said Saturday at a pre-tournament news conference. "I would be lying if I say I feel that I am ready to win."

Nadal remains a fixture in the elite group of men's stars known as The Big Four, along with No. 1 Novak Djokovic, No. 2 Roger Federer and No. 6 Andy Murray. He favors any of those three to win the Australian Open, which starts Monday.

"In terms of being favorites, the other names are more favorite than me at this time," he said during the news conference, slumped in his chair and repeatedly casting his eyes downward as he spoke.

An injury to his right wrist followed by appendix surgery kept Nadal out of competition for most of the last six months of 2014, a year that also had its share of triumphs. Nadal won a record ninth French Open and three other titles in the first half of the year. And despite his subsequent absence, he finished 2014 in the top three for the ninth time in a decade.

Nadal's season opener at the Qatar Open earlier this month, where he lost in the first round to a qualifier, didn't help his morale. He the first to admit he's not back at 100 percent.

Asked what aspect of his game he was happiest with, Nadal replied: "Nothing." He followed up with a smile but made it clear he wasn't entirely joking. "No, I am not serving bad. My serve is working more or less well. I need to be a little but more dynamic on court with my movements."

The big question about Nadal over the years has been his durability, and whether his body could hold up to the constant pounding of his hard-charging tennis style.

It was the second time Nadal chose to not attempt a defense of a major title: A year after winning Wimbledon in 2008, he missed that tournament with knee tendinitis.

At the start of 2015, he is reluctant to say he is fit, knowing that any match can present dangers.

As for his knees: "I am confident about my knees because (they) are working well," he said.

Another question mark is his back. He received stem cell treatment to repair cartilage in his back in November shortly after the appendix surgery.

"I need to take care about this for the moment," Nadal said, referring to his back. "Hopefully (it) will be fine."

Nadal knows how to boost his confidence. He needs to win.

"Every time you come back, you have doubts, you have the feeling that you are far from your best," Nadal said. "The only thing I can say is I need to play better, yes. But the only way to play better is to win matches."

Nadal will hope to win his first match on Monday, the third of the tournament on Rod Laver Arena, against former top 10-player Mikhail Youzhny.

Center Court: Nadal Or Murray?
ESPN's Prim Siripipat talks to senior writer Greg Garber about whether Andy Murray or Rafael Nadal will have a better chance at the Australian Open.